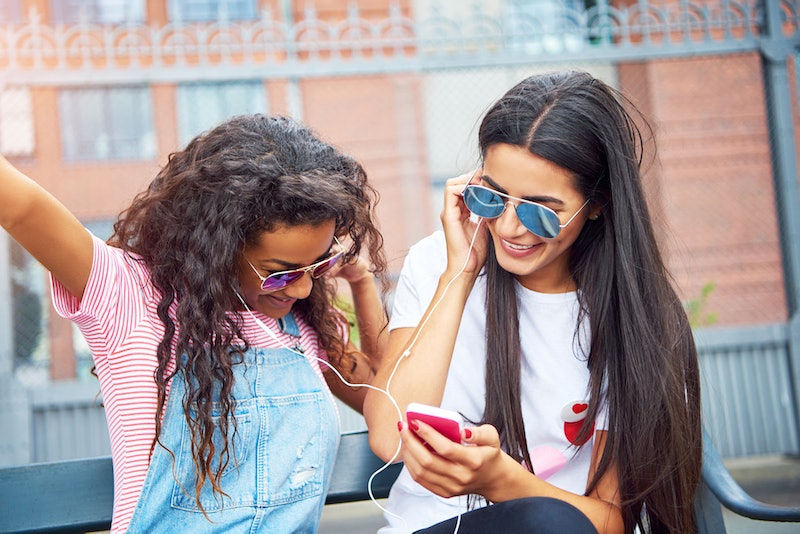 If you were never a fan of sharing headphones on middle school trips (either because of earwax or just because your music wouldn't be as loud), then the new iOS 13 update is just for you. Apple announced the update in June, and it'll let two people use a feature called Audio Sharing to listen to the same songs at the same time through separate headphones. So, if you're ready for a group listening experience that beats the 2000s, your next step is actually figuring out how to share music between headphones with iOS 13.

Audio Sharing dropped at the same time as several other new features including a new Dark Mode, a Quick Path keyboard, and a more aesthetically pleasing Photos set-up, among other updates. However, this iOS 13 update is only compatible with iPhone 6S and later, the iPad Air 2 or later, and the iPad Mini 4 or later (as well as all the iPad Pros), according to Wired.com. So if you have the appropriate Apple device, then you're ready to start avoiding extra ear wax and share your favorite songs with a friend.

Before sharing your audio, it's important to know that this feature only works with certain Apple Bluetooth headphones, according to Wired.com. This includes all AirPods and certain Beats models including Powerbeats Pro, Studio3 Wireless, BeatsX, Powerbeats3 Wireless, and Solo3 Wireless, Wired.com points out.

After making sure both parties have the right headphones, you can share audio just by touching the phones together. After doing this, you should see an option box pop up that says "Share audio," according to Wired.com. When one of you clicks this and plays a track, both users should be able to listen to that same audio in their own headphones at the same time, and even control the individual volume.

Another way you can share audio with a friend is by pairing both of your headphones to the same device you want to listen music out of (i.e. your iPhone or tablet). In the same way you would connect your headphones to any device, you would turn your bluetooth on and then make sure your headphones are ready to pair (this is done by clicking the headphone's pairing button, which varies from headphone to headphone). After going into your phone's Settings and clicking on Bluetooth, you simply choose which device you'd like to pair with. Then repeat this for the second pair of headphones.

Usually, when one device is paired to headphones, you wouldn't be able to connect another one. But because of the iOS 13 update, the second device will be allowed to connect. After connecting, you just play a track on the mutual device, and you'll both be able to listen to it. Then, because no one wants to share music forever, you can stop sharing audio by either disconnecting one of the headphone pairs from the device, or by turning off Bluetooth on the shared device. You can do this by going back into your phone's Settings, clicking Bluetooth, and then clicking the little "i" icon next to the name of the pair of connected headphones. From there, you select "Forget This Device."

Once you get the hang of how to share your audio, you can kiss the days of other people's earwax getting on your headphones goodbye.