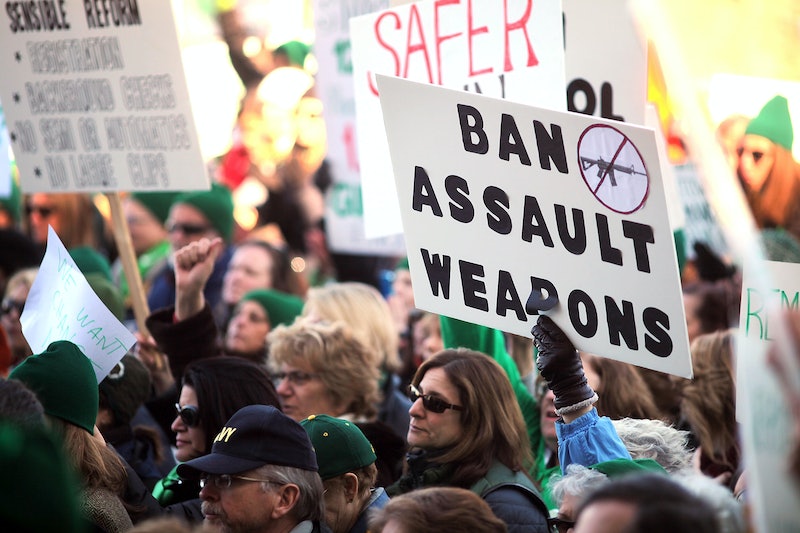 After the shooting in Las Vegas on Sunday evening, which left at least 58 people dead and more than 500 injured, the national debate has once again re-focused on the relationship between gun control and the Second Amendment. How can America prevent similar violent attacks from occurring in the future without passing laws that go against the constitution? Gun violence is currently the leading cause of injury death in the U.S. and there are as many as 310 million guns currently in circulation in the country; nearly one weapon for every living man, woman, and child.

Compared to other developed countries, the U.S. has six times as many shootings as Canada and 16 times as many as Germany. On average, there is more than one mass shooting for each day in the U.S., according to an analysis by Vox. There are also no federal laws that ban semi-automatic weapons, military-style rifles, handguns, or limit high-capacity magazine ammunition, which allow mass shooters to fire multiple bullets in a single round and in rapid succession, such as in the case of the Las Vegas shooter.

The gun control debate has centered on how to reduce mass shootings and violence without jeopardizing the constitutionally protected right to bear arms. Here are ways to do just that.

Between 2012 and 2015, the FBI reported that half a billion dollars worth of guns were stolen, amounting to 1.2 million guns. A gun is also stolen in the U.S. every two minutes. Stolen guns are also a threat to public safety and prevent police from solving violent crimes.

A police tactic called "Operation Ceasefire," implemented in 1990s Boston saw a group of law enforcement, social service, and community members come together to target gang violence. They used a method called "pulling levers" that made it known to gang members that the police knew their identities and that gun violence wouldn't be tolerated. The city then implemented social services and community resources to double down on prevention efforts and gave gang members special attention.

Studies have shown that the urban gun violence rate has reduced by 20 to 40 percent as a result of these measures.

A majority of gun-related deaths in the U.S. are suicides and the states with the most guns also have the highest suicide rates. More than 19,000 of the 31,000 gun deaths in 2010 were from suicide, according to the Law Center to Prevent Gun Violence.

"If we were to cure mental illness, the suicide rate would go down by 50 to 75%," Jeffrey Swanson, a gun violence researcher at Duke University, told BuzzFeed News.

The 1968 federal Gun Control Act prevents people who have been involuntarily committed for mental illness from buying guns. The problem with this measure is that it doesn't take into account people who are at-risk of hurting themselves or have never been committed involuntarily for mental health reasons.

One way to combat gun-related suicides is to recognize when someone is a danger to themselves and to temporarily restrict their access to guns. In California, people who are deemed at-risk to themselves or others are held at a mental health facility for three days and are banned for five years from owning guns, which they can then petition through a court order.

In Obama's 2016 executive actions, he proposed invested $500 million towards increasing access to mental healthcare. Obama also wanted to include information in the background check process that would prohibit people from possessing a gun for mental health reasons.

Although Obama's measures didn't pass in Congress, suicides account for 61 percent of gun deaths in the U.S.. Better access to mental health treatment could help reduce the risk for suicide and keep guns out of homes of people who could use them to hurt themselves. A study showed that increased gun regulations between 1995 to 2004 coincided with a significant reduction of suicide rates among men.