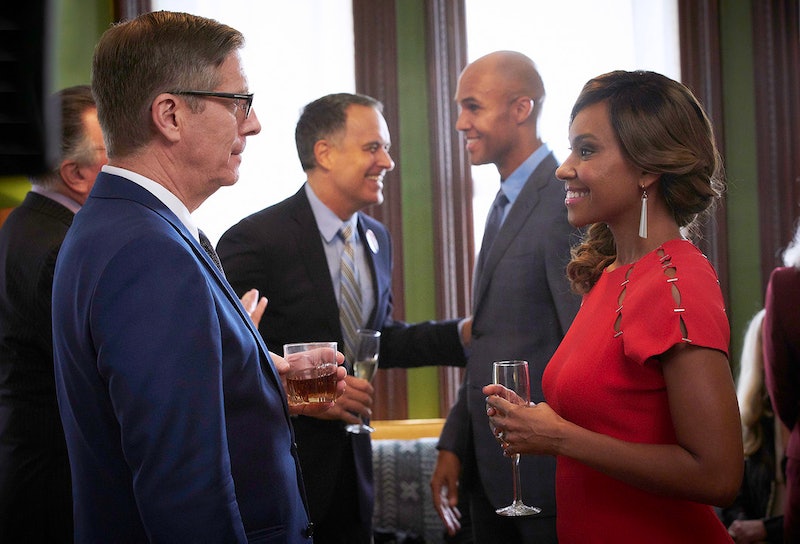 There are so many reboots and remakes and do-overs of famed television shows and movies that it's hard to keep track sometimes . Some are shmeh, and some are delightful — and BET+'s new remake of the 1996 comedy The First Wives Club is sure to fit in the latter category. It's a reworking of the hilarious tale of feminism, friendship, and revenge and BET+ is ready to give it to us. But first, you need to know how to stream First Wives Club on BET+ — because you're not going to want to miss it.

The 1996 movie, starring Diane Keaton, Goldie Hawn, and Bette Midler, was based on the 1992 Olivia Goldsmith novel of the same name, and it documented a group of friends coping with divorce, getting dumped, and being generally under-appreciated by the men in their lives. In 2019, First Wives Club gets a refresh with, according to Oprah magazine, all-new women and most of the same problems. Hazel, played by Jill Scott, is a singer recently embroiled in a big cheating scandal with her husband. Michelle Buteau plays Bree, a surgeon, and Ryan Michelle Bathe plays Ari, a lawyer.

Both Bree and Ari are there for Hazel as her marriage falls apart, which makes them see they have issues in their own relationships that need tending to. Of course, they all need to lean on each other — and maybe give a little bit of payback to all those who did them wrong.

So how can you see it? It's not on TV! BET is launching its own streaming service, BET+, which launches September 19. According to Deadline, the new platform will feature "over 1,000 hours of content," and that includes both old and new shows. The 10-episode First Wives Club is BET+'s flagship show, and access to it (and all the other ones) will cost $9.99 a month.

Fans of the movie are certainly excited to see the remake, and the actors are excited to show it off, too. “It’s kind of unreal that you get to pay this incredible homage to a movie that I can’t believe hasn’t had 15 sequels, 17 reboots and a ride at Disneyland," Bathe told Us Weekly. Writer Tracy Oliver thinks the story is one that never goes out of style, hence the welcome arms for a do-over.

“I don’t think that all movies necessarily lend themselves to remakes and reboots and TV shows,” Oliver told Entertainment Weekly. “But, at the core of this one, it was just all about women and women finding their voice and their place. That’s something that’s timeless and something we could definitely use in 2019.” (And don't worry — that iconic "You Don't Own Me" moment from the original film will make an appearance, Oliver says.)

It might seem like a lot to subscribe to one more streaming service (there are so many!), but with First Wives Club (and its amazing cast) and all the other content soon to be available on BET+, this one might be worthy of opening your Apple Pay for.

More like this
Hallmark’s The Way Home Is Like 'This Is Us' Meets 'Back To The Future'
By Grace Wehniainen
Here’s What Happens To Bill & Frank In 'The Last Of Us' Video Game
By Brad Witter
This First Look At 'The Gold' Shows Jack Lowden In A Whole New Light
By El Hunt and Sam Ramsden
At 28, Debra Jo Rupp Was Living A Much Different '70s Show
By Grace Wehniainen
Get Even More From Bustle — Sign Up For The Newsletter
From hair trends to relationship advice, our daily newsletter has everything you need to sound like a person who’s on TikTok, even if you aren’t.

This article was originally published on Sep. 19, 2019