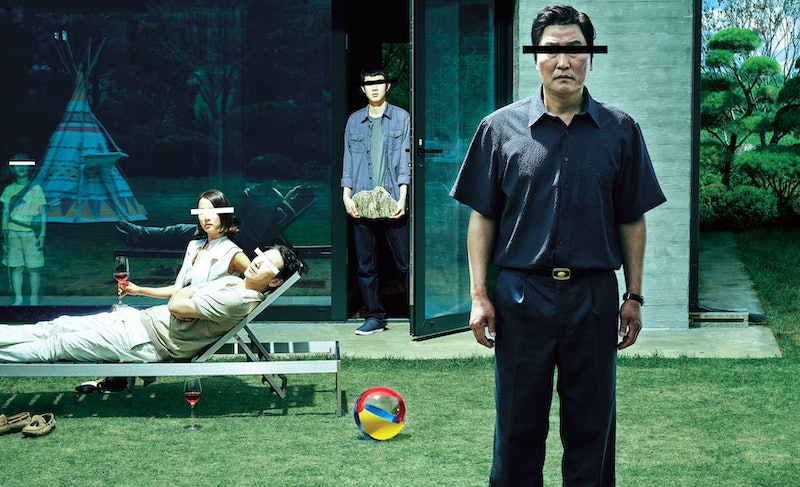 Bong Joon Ho's class-centric black comedy Parasite walked away with four Oscars and the best burn of the Golden Globes, but that's just the latest wins in the film's unstoppable streak of popularity. If you haven't yet seen the story of a poor family conning a rich one for their own survival, you're in luck — you'll soon be able to stream Parasite and see what everyone's talking about.

The acclaimed director's latest film exclusively hits streaming service Hulu on April 8 in the U.S. For those who just can't wait to see what the hype's about, it's currently available for rental and purchase on streaming services Amazon, Apple+, YouTube, Google Play, FandangoNow, Redbox, Vudu and Microsoft, with a DVD and Blu-Ray released on Jan. 28. After a full run on the festival circuit, during which it won the highest honor at Cannes, Parasite has been in and out of theaters all over the world, so there's also a chance you can still see it in many theaters right now if you're truly impatient.

One thing that's recommended no matter which way you end up seeing the film is that you try to go in without reading any spoilers. However, know this: though Parasite was marketed in its U.S. ad campaign as a tense horror thriller, in reality it's a wry, bleak comedy with nary a jump scare. While there's a smidge of gore and a lot of ominous looming, this film's only monster is major economic inequality, which forces people to do desperate things for survival.

Parasite opens with the misadventures of the Kim family, who are hustling hard folding pizza boxes and siphoning WiFi in their sub-basement apartment and still failing to make ends meet. Their fortunes change when son Ki-Woo runs into an old friend, who asks him to take over his tutoring gig with a rich family. Ki-Woo doesn't have a college degree, but with the help of his family he fakes it and ultimately makes it, integrating himself into the household of the wealthy Lee family. From there, the Kims scheme to get every member of the family hired one by one as disparate (and definitely not related) household staff, even ousting the longtime housekeeper from her position to do so.

Though the film has been praised for its depiction of a very real international poverty problem, Bong told The Hollywood Reporter that Parasite tweaked authenticity a bit for the story. "In reality, there are very few opportunities for the rich and for the poor to mix nowadays, because they travel in different channels. They don’t mingle. But if you are poor and become a tutor in the home of a rich family, then you have this unique opportunity to see both worlds."

Parasite made numerous critics' year-end Top 10 lists, and is a strong awards season contender. Now that it's finally hitting streaming services, you'll have even more ways to check out the film before the Oscars and see what everyone's been talking about.