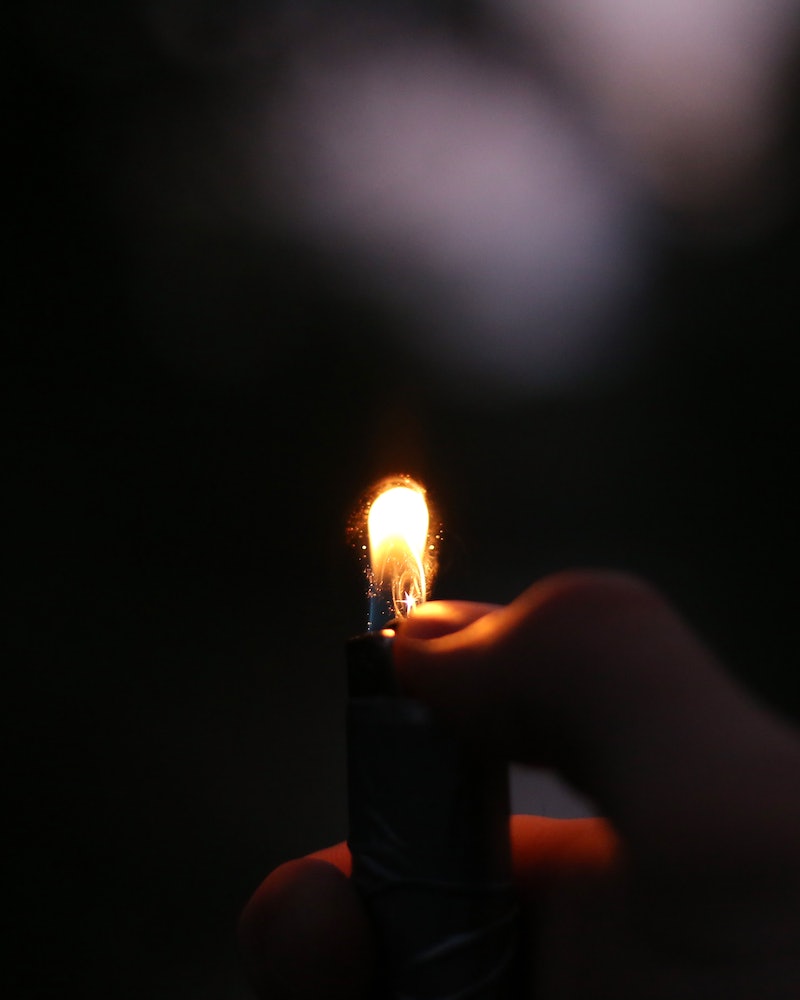 I don't have much interest in conferring with the dead. It's just not a line I've ever felt the need to cross. OK, OK... that's not entirely true. When I was a teenager and heavily influenced by one of the greatest '90s movie of all time — The Craft, of course — my friends and I would huddle together around a Oujia board in my good friend Clair Kennely's backyard treehouse, and summon the ghosts around us if anyone was crushing on us (ugh please say Jason, Oujia Board, please say Jason) whether they could carry out evil curses on our sworn enemies, ahem, Romy.

Now that I'm nearly a fully-fledged adult, and things like the internet — a paved highway, if you will, into the world of all things random and spectacular — you can find just about anything these days, especially around this time of year as the world prepares for the spookiest and weirdest of holidays: Oct. 31, Halloween! So when a quick google search on How To Summon A Ghost This Halloween offered so many, shall I say, interesting and downright ridiculous results, I could help but keep mental tabs of a few of my favorites If you do want to get in the spirit, and more importantly, if you want the spirit to get to you, then check a few ways you can summon a ghost this Halloween. Warning: I am not responsible for anything that happens, and also, I really don't recommend any of these.

Try Your Hand at Ouija

For those of you who've never used a Ouija Board, the "game" (trust me, it is anything but) consists of a board with 26 letters of the alphabet and numbers from 0-9, the words “Yes” in one corner, “No” on the other corner, and “Goodbye” in the lower middle. Now, this is a game best played with others, preferably in the dark. All you have to do is place your fingers gently on the "planchette" and ask a question aloud. If the spirits are with you, they will guide you to the answer on the board. Just remember to always bid the spirits you speak to goodbye at the end of every session, lest you want them hanging around because you didn't close the supernatural door correctly.

Buy a Candle, Draw A Pentagram

This one is relatively easy. Basically all you have to do is buy a white candle and draw a pentagram (you know, that kind of creepy star symbol) on a blank piece of paper. Place two sheets of papers one with “Yes” and the other with “No” written on it. You can then summon the spirits as the candle bends either to “Yes” or to “No” in response to your questions.

Anyone who's seen the movie The Craft surly know what a seance is, and most likely even engaged in one or two of them as an adolescent. If you haven't you seriously missed out big time (it's not too late though, go see it!) they're actually quite a lot of fun and one of the best methods in communicating with a spirit. According to the website People of Our Everyday Life, the color of the candle will influence the identity and nature of the spirit that is beckoned to you, so choose the color wisely! White candles are used to attract good, while black candles will generally summon negative spirits.

Take A Look In The Mirror

This one is where I draw the line, but for the more intrepid here's what you do according to the website: Blumhouse.com. Readers beware, once you summon the ghost you will never be rid of her!

Step One: Turn off the lights in the bathroom.

Step Two: Spend at least five minutes quieting yourselves mentally outside the bathroom door. If you’re doing this, it’s probably because you’re 12 years old… but don’t act like a 12 year-old. Don’t giggle… you’re literally summoning a demon here. This is some serious, serious sh*t — and you should not mock the forces of the supernatural.

Step Three: When suitably mentally prepared, spin around three times, light the candle, and enter the bathroom, closing the door behind you.

Step Four: Lightly place a finger on the mirror, and have the rest of the dumb friends you roped into doing this hold hands, forming a human chain attached to the mirror. Gaze into the darkness of the looking-glass.

Step Five: As you stare into the mirror, slowly and clearly repeat the name “Bloody Mary” five times. Do not blink. Do not waver. Do not quail.

Step Six: If nothing happens, try adding this: “I stole your baby, Bloody Mary.” This is a reference to Mary Tudor’s inability to conceive an heir to the throne… so it will totally piss her off, and should draw her to you.

If you did everything right, the author continues, you "should see the horrifying visage of a gaunt and terrible ice queen in the corner of you mirror, staring at you with jealousy and hatred." Yikes.

This is one of the oldest tricks in the book. Basically, using a crystal ball to speak with a ghost is similar to the mirror method, and you communicate by speaking to and asking questions to the ball itself. There's even a technical term for this and it's called scrying, which yes, sounds like crying which is exactly what I would be doing if anyone appeared from within that ball and started to talk to me. Anyway, scrying goes back to the olden days and was a common method for talking to spirits, and even telling the future.