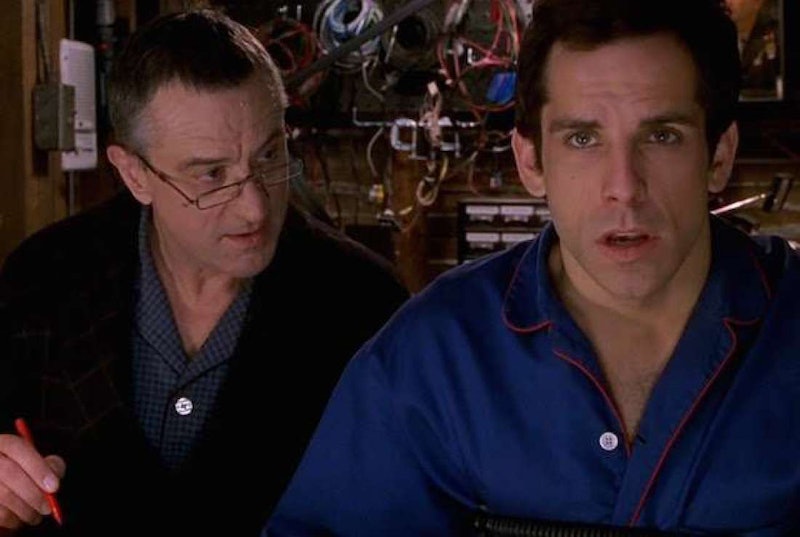 Everyone loves a good bedtime story, especially one that's short and sweet. If your BAE asks you to tell then a story, and your mind goes blank, here's how to tell a story in movie titles, according to Twitter. If you don't consider yourself a good storyteller, or being put on the spots results in your sputtering out a string of um, meh, and ugh (this is me all day), consider using a combination of your favorite movie titles instead.

My movie title life story would be The Perks of Being a Wallflower is knowing What's Eating Gilbert Grape. Because, introverts learn a lot from watching people, but not in a creepy way. Want to try it? The hashtag #TellAStoryWithMovieTitles is trending on Twitter, and the stories are both creative and funny AF. It's kind of like Twitter Mad Libs with movies. "It was a Nightmare on Elm Street when Carrie took her Face/Off," Shelly Splainin’ tweeted, effectively doubling the horror of these two horror movies.

You can actually play this game by topic too. Bored Panda posted a story asking people to describe their sex lives using movie titles because sometimes movie titles can say what you can't. Results ranged from Home Alone to Fast and Furious to 127 Hours, proving that sometimes you're a soloist, sometimes you engage in quickies, and sometimes you enjoy week-long stints in bed with your BAE. If you need some inspiration for how to tell a story using only movie titles, these 18 #TellAStoryWithMovieTitles tweets have your back.

1. Sometimes A Thriller Is Also A Love Story

If the object of your affection boils your rabbit, it is indeed a fatal attraction, and you should beat feet to get the hell out of there. But, if they give you a rabbit, maybe it is actually love.

2. Because, Sometimes You Need A Bodyguard

If you know someone's evil secret, and they know you know, an axe murderer who doesn't want to kill you might come in handy.

3. No Truer Words Have Ever Been Spoken

Because, men can't handle the truth about most things.

A cabin in the woods with your BAE's parents? This is some people's idea of hell.

5. Because Meeting The Parents Can Be Scary AF

If it happens on Christmas Eve, it is indeed a nightmare before Christmas. Kind of like The Family Stone.

6. Maybe Heaven For Wise Guys Is An Italian Restaurant ...

7. Because, Where You're From Doesn't Dictate Where You Can Go

Because, all who wander are not lost.

8. The First Rule Of Fight Club Is Calling It The Breakfast Club

Because, there's no fighting at breakfast.

Many among us have never gone under a staircase again after watching The People Under The Stairs. Someone should have warned the babysitter.

"You say the world has come between us/Our lives have come between us/Still I know you just don't care/And I said, "What about Breakfast at Tiffany's?" — Deep Blue Something

11. The Best Anti-Drug PSA Ever, #TheMoreYouKnow

If you're seeing flowers in an empty attic, it might be time to reevaluate your life choices. Just sayin'.

12. I Can Confirm Dr. Strange Lives On Hollywood Blvd.

You can get your picture taken with him (or any superhero or villain) for a dollar.

13. You Need Proof That Santa Exists

Because, more people believe in aliens than Santa.

“I think that would qualify as not smart, but genius….and a very stable genius at that!” — President Trump

And, there is a special place in hell for dog haters.

... that teaches us that it's probably not a good idea to babysit people your own age who you're attracted to.

18. Why You Should Spay & Neuter Your Pets