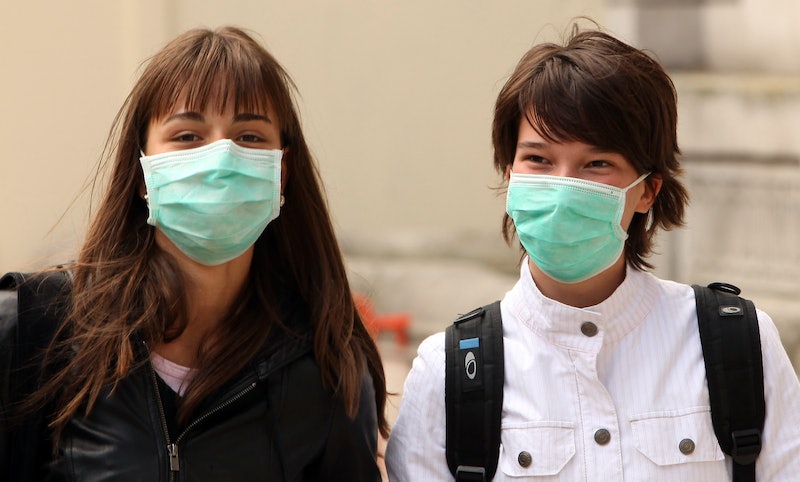 If flu season weren't already bad enough this year, there's another virus that mimics the flu but is actually something else entirely. If you're wondering how to tell if you have the flu, or something else, NBC News reported that symptoms of adenovirus are similar to those of influenza. However, adenoviruses can be hard to spot because symptoms like gastrointestinal distress, urinary tract infection, pink eye, neurological issues, and respiratory problems are common in a number of different illnesses, according to the Centers for Disease Control and Prevention.

While people in the military are vaccinated for adenovirus, the general public is not. "That’s a big deal, especially for a disease that by all means is vaccine preventable," Adriana Kajon, Ph.D, told NBC News. "But this vaccine is not licensed to be used in civilians." Seriously, if there were ever a time to hunker down indoors for a long winter of hygge and lagom, this is it because this virus spreads faster than rumors about Kim Kardashian's surrogate.

Adenoviruses is spread similar to the flu, but you can also catch it from being exposed to infected stool (like when you change a diaper), food prepared by someone who didn't wash their hands properly, or infected water. In some cases, "the virus can be shed (released from the body) for a long time after a person recovers from an adenovirus infection, especially among people who have weakened immune systems," the CDC explained on its website. "This 'virus shedding' usually occurs without any symptoms, even though the person can still spread adenovirus to other people."

If your symptoms include a fever and chills, coughing, a sore throat and runny nose, body aches, headache, and fatigue, you likely have the flu. However, if you also have other symptoms like vomiting, diarrhea, bladder issues, neurological issues other than a headache (like a stiff neck), a barking cough and breathing distress, an earache, or pneumonia, it's worth going to the doctor to see if you actually have adenovirus, which NBC News noted has more than 50 different strains. And, not all strains present with all symptoms. While you'll probably be just fine, you don't want to take your chances with this zombie-like virus.

"Most patients may not suffer much, but the virus can cause very severe complications," NBC News explained. "Kajon and colleagues described the case of a 43-year-old Rochester, New York woman, previously healthy, who became infected in 2012 and quickly developed pneumonia and respiratory failure. During her hospital stay she suffered brain swelling and bleeding and stayed on a ventilator for more than a month." I actually know someone who contracted something like this, and while she eventually recovered, she suffered a similar ordeal as the Rochester woman.

The thing that makes adenovirus so tricky is things like pink eye can just be pink eye, gastrointestinal issues can be norovirus, and pneumonia can be pneumonia (though you should go to the doctor for this regardless). However, if you have a combination of these symptoms, it might be something more serious, like adenovirus.

Additionally, adenovirus can hang around for a long time — a month or more, NBC News reported. Things that kill the flu virus won't get rid of adenovirus, so you'll have to use a product with chlorine (like bleach) to clean hard surfaces if you do come down with adenovirus. And, if you're a year-round swimmer, you might want to get out of the pool for awhile if you suspect you have this dreaded virus.

"Adenoviruses are resistant to many common disinfectant products and can remain infectious for long periods on surfaces and objects," the CDC noted. "It is important to keep adequate levels of chlorine in swimming pools to prevent outbreaks of conjunctivitis [pink eye] caused by adenoviruses." Preventing adenovirus requires the same vigilance as keeping yourself safe from the flu. Because there is no vaccine, and it's highly contagious, adenovirus can spread rapidly in places like college dorms, offices, on public transportation, or any other place where there is high concentration of people.

Learn how to wash your hands properly, cover your mouth and nose when you cough and sneeze, stay home (for the love of god) when you're sick, avoid other sickies, and don't touch your eyes, nose, or mouth without first washing your hands, the CDC advised. You can also keep your immune system strong by eating healthy (these immune-system boosting recipes are a great start) and making sure you get enough sleep.

If you do get adenovirus, because it is a virus, there's not much you can do besides ride it out with rest, fluids, and a good Netflix marathon. If you're symptoms are severe, your doctor might give you the antiviral drug cidofovir, according to the website Infectious Disease Advisor. And, if you live in the northeastern United States, a study published in the journal Emerging Infectious Diseases found that you're more likely to catch adenovirus than people who live in other areas of the country.

The best offense for fighting off adenovirus is a good defense. With one of the worst flu seasons on record, and adenovirus on the rise, being vigilant about staying healthy is more important than ever before. Because, seriously, adenovirus sounds like a storyline straight out of The Walking Dead, and you really, really, really don't want to catch it.