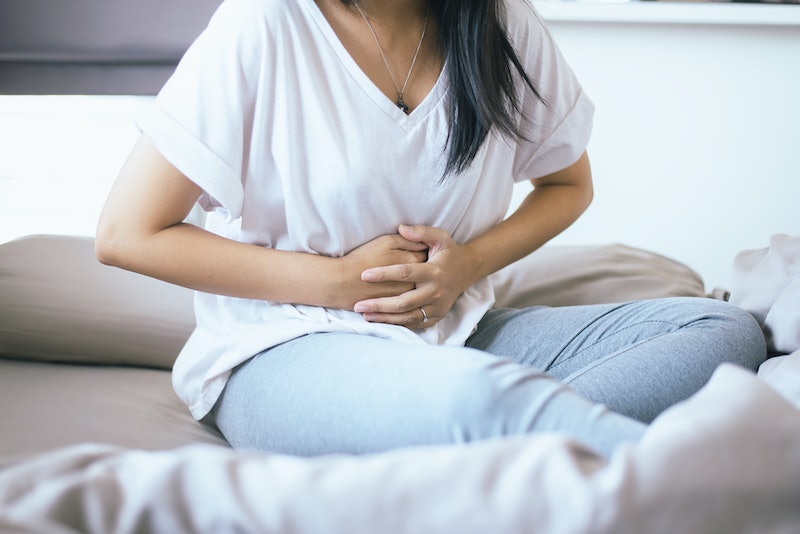 Most of us briefly learned about sexually transmitted infections (STIs) and urinary tract infections (UTIs) in high school health, but probably weren’t clued in to how common both these kinds of infections are — and how similarly they can feel. According to the National Kidney Foundation, nearly one in five women will have at least one UTI in their lifetime, making these infections super commonplace. What’s more, as Vox reported, the amount of people who become infected with STIs — such as syphilis, gonorrhea, and chlamydia — has been on the rise in the U.S. since 2016. Because both these kinds of infections are relatively common, and considering how close your reproductive organs are to your bladder and urinary tract, it’s no surprise that telling the difference between a UTI and STI can be difficult at times.

“STIs can feel similar to a UTI, because the infection can often be felt as burning, pain upon urination, and pelvic pain,” Dr. Sheila Loanzon, an OB/GYN and author of Yes, I Have Herpes, explains to Bustle. However, there are slight differences in these two types of infections that OB/GYNs say you can spot on your own.

Though it’s totally possible to have an STI and present with no obvious symptoms, burning and painful sensations that feel similar to a UTI are not out of the norm: Dr. Lauren F. Streicher, a Clinical Professor at the Feinberg School of Medicine, the Medical Director of Northwestern Medicine Center for Sexual Medicine and Menopause, and author of Sex Rx-Hormones, Health, and Your Best Sex Ever, explains that differentiating between herpes, chlamydia, or gonorrhea, versus a UTI is typically the most challenging at home.

“Herpes most commonly can have UTI-like symptoms,” Dr. Streicher tells Bustle, adding that, however, “up to 60 percent of people with their first outbreak experience difficult and painful urination, in addition to blisters, low grade fever, swollen lymph nodes — which all point to herpes, rather than a UTI.”

Sores may be a clear giveaway that you are dealing with herpes rather than a UTI, but diagnosing chlamydia and gonorrhea can be a bit trickier: “STIs infecting the urogenital tract, such as gonorrhea and chlamydia, when symptomatic, are more likely to share symptoms with UTIs. For example, when gonorrhea has infected the urethra and does cause symptoms, they are usually painful, frequent and urgent urination,” says Dr. Zeina Saliba, a Clinical Assistant Professor for the Department of Obstetrics & Gynecology at the Virginia Commonwealth University. This means that distinguishing UTI symptoms from a possible STI in your urinary tract will require a consult with your physician. Dr. Streicher says that once you’re at you OB/GYN’s office, certain tests — such as a urinalysis, a urine culture, or a full STI screen — can be administered to determine what health issue you’re actually dealing with. That way, you can receive appropriate medical treatment.

Further, Dr. Loanzon adds that, “It is important to distinguish between pelvic pain released when urinating with a UTI, versus when the urine hits the vaginal skin wall.” Obviously, if you’re experiencing pain and burning, it may be hard to decipher the "why" in the moment. Only a trip to the doc will give you a definitive answer.

And it's important to note that, as Dr. Streicher explains, you can have both an STI and UTI at the same time. Sigh. “The symptoms are similar, and you can have more than one thing going on at a time,” she says. So making sure you head to your doc as soon as you can to figure out exactly what's happening, and treat it appropriately.

Whether it’s an STI or UTI or both, seeking medical treatment as soon as you start experiencing symptoms is paramount. Many people think you can treat a UTI by hydrating or drinking cranberry juice, but it's an infection that requires antibiotics. If left untreated, UTIs can progress to a serious kidney infection (aka, pyelonephritis). On the other hand, Dr. Saliba says untreated STIs can lead to “chronic pain, pelvic inflammatory disease [with the exception of herpes], and infertility.”

The symptoms of STIs and UTIs are similar in so many instances, that confusing the two is a common mistake. Even if you feel in tune with your body and physical health, seeing your OB/GYN is almost always necessary to get the proper diagnosis. However, by taking note of subtle differences medical experts say to look out for, you may grasp a better understanding of the health issue you are dealing with.

More like this
Dyson Is Dropping Futuristic, Air-Purifying Headphones
By Rachel Lapidos
6 Unexpected Causes Of Post-Workout Fatigue
By Carolyn Steber
This Company Will Send STI Tests Right To Your Door
By Lexi Inks
Celine Dion Reveals She’s Been Diagnosed With Stiff Person Syndrome
By Jake Viswanath
Get Even More From Bustle — Sign Up For The Newsletter