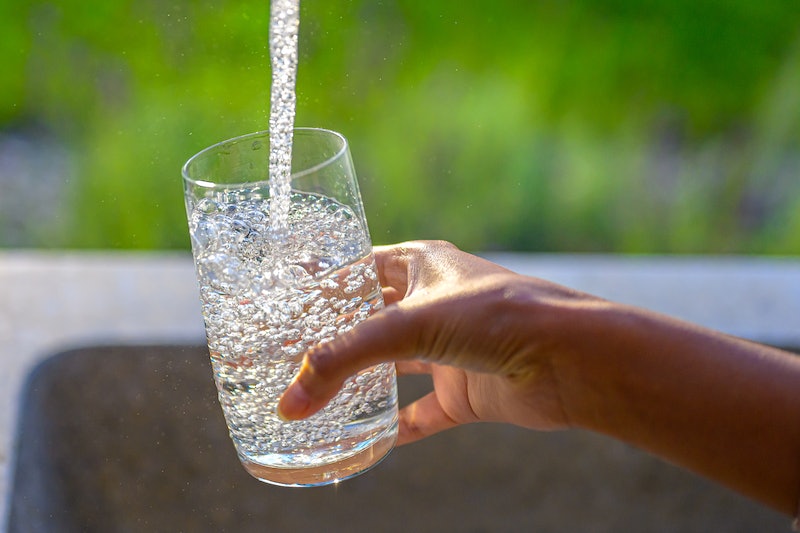 I've written about how to prevent urinary tract infections in the past — mainly because I've had several, and they've all been miserable. However, since UTIs are so common (about 50 percent of women will experience the burning hell-fire of a UTI in their lifetime, and approximately 20 percent of women will suffer through multiple UTIs throughout their lives), are painful, and can cause serious kidney damage when ignored, I decided it was time for me to write some more about the easiest hacks to prevent UTIs. After all, when it comes to maintaining a healthy urinary tract, it's really not possible to be too informed or too prepared. Am I right? (Yes, yes I am.)

Unfortunately, UTIs are more common in women than men —women have shorter urethras than men do, so it takes less time for bacteria to make it's way from our pee tubes to our bladders — and they can be caused by everything from holding your pee for too long to not drinking enough water. Most commonly, though, women contract UTIs simply from having sex — so for this article, I decided to consult some modern experts on women's sexual health. I spoke with one of Bedsider's medical advisors, Linda Dominguez, Certified Nurse Practitioner (CNP) at Southwest Women's Health in Albuquerque, New Mexico to find out how you can basically become a UTI-prevention wizard. (You're welcome.)

Read on for seven doctor-recommended hacks for preventing UTIs.

Personally, thongs just aren't any fun for me, but if thongs are your jam, I'm afraid I have some bad news for you. When Dominguez was giving me tips on how to prevent UTIs, her very first suggestion was to, "Give up the thong!" As Dominguez told Bustle, thongs only make UTIs easier to contract because they "bring germs like E coli from the rectum up to the other two openings — the vagina and the pee place, the urethra."

No matter what underwear style you're wearing, though, Bedsider suggests always picking undies made of cotton — because cotton breathes, whereas synthetic fabrics (like nylon and lycra) can trap moisture and contribute to bacterial growth. (And no, a cotton crotch might not be enough if the rest of the panty is synthetic.)

Whether you're about to get down with a partner or engage in some solo-play, keeping wet wipes and tissues on your nightstand and in your bathroom will make it easier for you and your partners to avoid contracting UTIs. Just make sure you stick to non-scented wipes free of parabens, dyes, and other chemicals — because using the wrong wipes can increase your chances of contracting UTIs and yeast infections. Obviously, you should shop around to figure out which wipe works best for you, but definitely check these out in the meantime.

If your partner has a penis, remember that it's OK to ask him to wipe that thing off pre-sex. Make sure he cleans his hands too, because, as Dominguez tells Bustle, "He also may have common germs on his hands, or the skin of his genitals, or under the foreskin if he is not circumcised."

If you've ever wondered why cranberry juice and UTI prevention always seem to go hand in hand, here's the deal: cranberries contain two major UTI-fighting ingredients — vitamin C and D-mannose. D-mannose is an all-natural sugar that fights UTIs by tearing E. coli germs away from the walls of your urinary tract so you can flush the bacteria out of your system when you pee. Large amounts of vitamin C, on the other hand, help keep your urine more acidic. The more acidic your urine is, the easier it is for your urinary tract to remain free of bacteria. Boom.

If unsweetened cranberry juice is just about as appetizing to you as pond water, don't worry. There's a whole slough of other vitamin C and D-mannose-rich-fruits and juices that will help you keep your urine free of UTI-causing bacteria. (Like apples, kale, oranges, and bell peppers, to name a few.) You can also opt to take supplements instead or relying on food alone to get the UTI-fighting vitamins you need. Whatever you decide, both vitamin C and D-mannose can be found at most health food and vitamin shops.

4. Use Lots Of Natural Lube

Whether you're a fellow lube-enthusiast or not, you should at least think about keeping the stuff handy, because using the right kind of lube could cut down on your UTI risk. As Bedsider reported back in 2011, using lube during sex can reduce the amount of friction on your urethra, and less friction equals fewer UTIs.

That said, certain lubes, like those containing fragrance, sugar, (yes, sugar), propolene glycol, and parabens could actually increase your UTI risk and cause you to develop a yeast infection, too. Fortunately, there are plenty of all-natural lubes, and natural alternatives to lube, (like coconut oil) that you can try.

5. Pee After Sex (But Maybe Not Before)

Peeing immediately after sex is a super simple way to protect yourself from developing a UTI. Peeing after sex flushes out bacteria, and is a crucial way to prevent e-coli from sticking around. Just be sure to drink some water before you get down so you have enough liquid to pee out — the more the better. (Peeing before sex, on the other hand, may make you slightly more likely to contract a UTI — though if you gotta go, don't hold it.)

That said, you should probably try to pee as often as possible whether you're about to have sex or not, because holding your pee for too long can increase your risk of infection. As Dominguez put it for Bustle, "Gotta go? Go! Don't let your bladder over-fill — pee before and after sex and go when you feel the urge!"

Unfortunately, going at it in the same position for an extended sex session can create some unpleasant friction down there — especially if you use condoms sans lube. As we've established, too much friction can increase your UTI risk. So if you're starting to feel a bit raw during sex, pause for a minute to switch things up (and lube things up) before you keep going.

7. Start Drinking Water As Soon As You Wake Up

Although drinking water won't cure a UTI, (only antibiotics can do that) Dominguez told Bustle that you can "try to dilute/flush it out with lots of plain water." Additionally, Bedsider says that drinking about two quarts of water a day can help keep your urinary tract free of infection-causing bacteria.

Since two quarts is a lot of water to drink in one day, your best bet for meeting that quota is to start chugging water as soon as you wake up in the morning. I know it may seem like a pain in the to add one more boring thing to your morning routine, but it shouldn't take you more than a minute, and it's worth avoiding the burning misery of a UTI.

More like this
18 Hinge Prompt Answers To Try If You’re Looking For Something Casual
By Lexi Inks
12 Active Date Ideas That'll Get You & Your Boo Outside
By Lexi Inks
Why Being “Too Sensitive” In Relationships Is A Good Thing
By Lexi Inks
50 Valentine’s Day Instagram Captions To Post If You’re Single
By Jessica Booth, Lexi Inks and Carolyn Steber
Get Even More From Bustle — Sign Up For The Newsletter
From hair trends to relationship advice, our daily newsletter has everything you need to sound like a person who’s on TikTok, even if you aren’t.