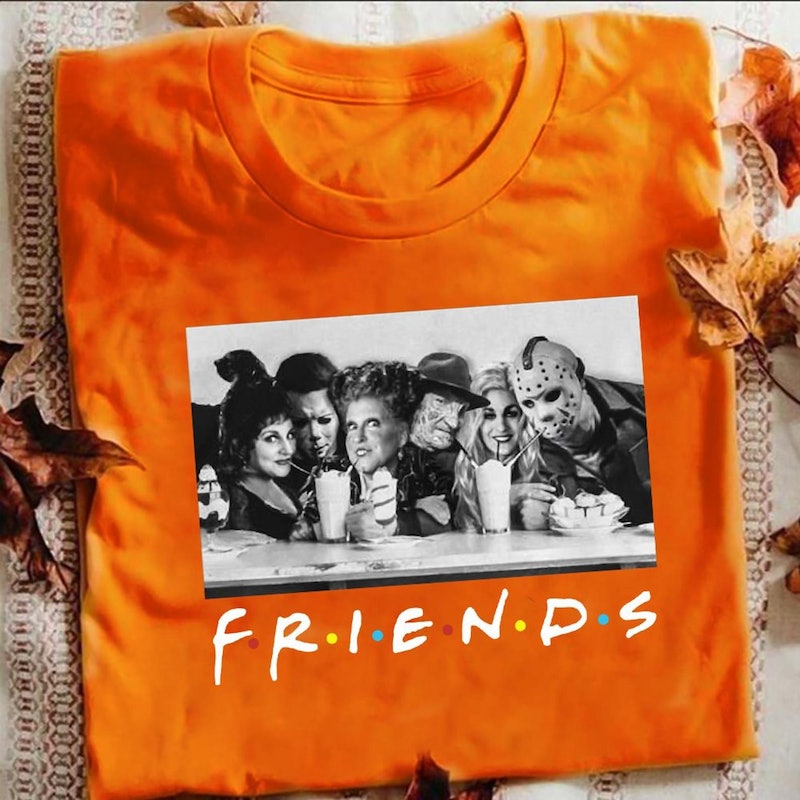 This is The One Where You Throw The Greatest Halloween Party Ever. Because it's Friends-themed, of course! Now, your friend group won't just have a Rachel, a Ross, a Phoebe, a Monica, a Chandler or a Joey, but a Freddy, a Jason, a Chuckie — you get the idea. You can throw a Friends-themed horror night of your sitcom-loving dreams. Or, nightmares, rather. It's as easy as rounding up the trusty troupe of classic horror characters and crossing it with Friends themes.

The craft savvy server Etsy is full of makers who can read a room. Friends, which is unfortunately leaving Netflix, is a show fans can't get enough of. You've most likely seen Friends-themed bridal parties (found their lobster!) and baby showers (The One Where We Become Parents!), but have you ever seen a Friends-themed Halloween party? Likely, no. Until now. Because Etsy creators have crossed sitcom with horror so that we really can have it all.

It's a sinister take on the buddy comedy, but it's Halloween so you can go there. The best part is that you don't even have to leave your living room to host! I mean, the core crew of the Friends cast rarely left their apartments, so if you can't rent out the coffee shop across the street, why leave? Simply transform your living room into a haunted lair. String cobwebs over your couch, and decorate with Friends-themed horror downloads, courtesy of the creative makers with shops on Etsy.

It's all about decorations. To get the idea across that this is a Friends-themed horror party, Rachel and Ross won't be present. A new crew has come to town and they're the freaky clowns and demonic toy dolls. So are you more a Chucky or a Pennywise?! Use this digital download to create a banner or print on invites so that your guests get the theme and don't ~kill~ the vibe.

Tag yourself, I'm Winifred Sanderson. This shirt is delightfully described as "Villain Squad Goals" and that's accurate. Throwing a party, especially a Halloween party, means that there should probably be an emphasis on dress code. Either have all your friends come dressed as their preferred horror-genre villain or don these festively orange shirts of the Friends fantasy re-casting.

It's not a party until there's food. Halloween offers an abundance of culinary routes to take and Friends offers us plenty of food moments to parody. Remember Rachel's disaster of a Thanksgiving Trifle? The one that was half meat pie and half dessert? Dessert gone awry is a horror in itself, so why not recreate that for your party table? You can follow in Rachel's footsteps and create a frightening dish. Not because it's inedible, but because you gave it a good ol' horror spoof. How? It's easy! Learn how to make fake, edible blood out of corn syrup by just following a quick YouTube tutorial and that can be used in your trifle or on any other dessert. However, if you're not a ~horror~able host and actually want your guests to find the food delectable, you can create this Pumpkin Cheesecake Trifle by Mom on Timeout.

Don't just throw any party this Halloween. Throw a Friends-themed horror party. It's as easy as printing out already-designed-for-you decorations, setting a dress code and making sure the appropriate food is ready to be served.