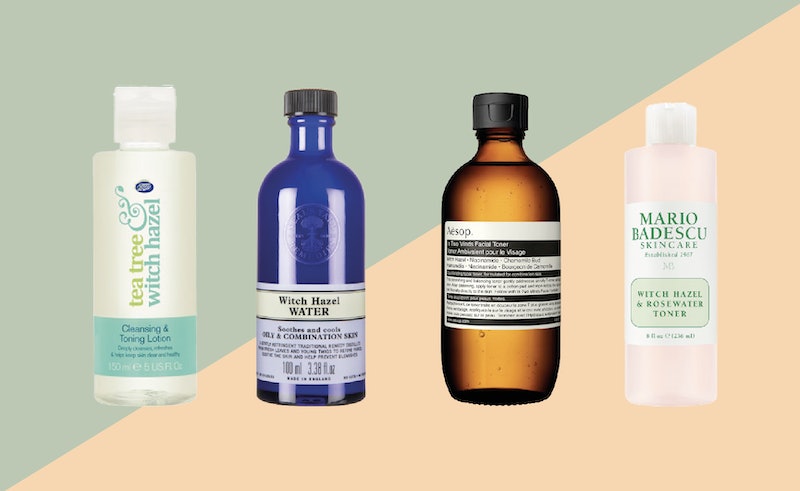 Witch hazel is set to be a hot ingredient for 2019. A longtime staple of the beauty industry, witch hazel has gone in and out of favour with the experts, but reports from Pinterest have shown searches are up 305 percent, meaning there's a growing interest at the moment. Here's everything you need to know about the ingredient, from what it is, how it works, and how to use witch hazel as a toner.

So first up — what is it? Well, witch hazel is derived from a flowering plant (Latin name Hammamelis virginiana) native to North America and Japan. The leaves, bark and twigs of the shrub are used to create a liquid that's marketed as witch hazel in medicine and skincare.

The benefits are pretty numerous too. "The [aid] of preparations made from its leaves and bark have been used for ages, and it has a number of skin benefits," Erin Gilbert, director of Gilbert Dermatology in Brooklyn, New York told Allure. "[These include] being soothing, acting as an anti-inflammatory, and having antioxidant properties."

In terms of skincare, witch hazel can help with everything from tightening pores to firming the skin (in higher concentrations) thanks to its astringent nature. Witch hazel is commonly used in skincare products targeting oily or combination skin, as it can help to balance and manage oil. Witch hazel doesn't just help in skincare, however. It has a number of other uses, from diminishing dandruff to soothing sunburn and bug bites.

Skincare pioneers Simple describe witch hazel as "an excellent natural toner that helps to tighten pores." Indeed, the ingredient has been known to be a brilliant toner, especially for skin on the oily side. Formulas containing witch hazel can be applied to skin with a cotton pad, following cleansing and before serums and moisturisers.

However, witch hazel can be drying and is astringent, so it's important to be wary. "Witch hazel can indeed help skin when used as a short-term remedy, but long-term use is a problem, no matter your skin type or concern," warns beauty website Paula's Choice.

With this in mind, I would recommend using witch hazel up to four times a week rather than every day, in order to give skin a break in-between. I'd also suggest finding a product that features other soothing, moisturising ingredients so as not to dry out the skin. Instead of opting for a straight up witch hazel formula, try one of the following, which feature things like rose, aloe vera, and tea tree.

Designed specifically with combination skin in mind, this toner uses witch hazel and niacinamide to balance skin without overpowering it. It comes as part of the brand's three-step routine for combination skin, which also features a cleanser and moisturiser.

For as long as I can remember, Boots has had an own-brand line that features witch hazel. Balancing out with tea tree to soothe, this toner does what it says on the tin (so to speak) for less than a fiver.

One of Kylie Jenner's approved skincare brands, Mario Badescu is known for its soothing, effective toning solutions. This formula contains aloe vera, rosewater, and rose oil as well as witch hazel to flood the skin with antioxidants and moisture.