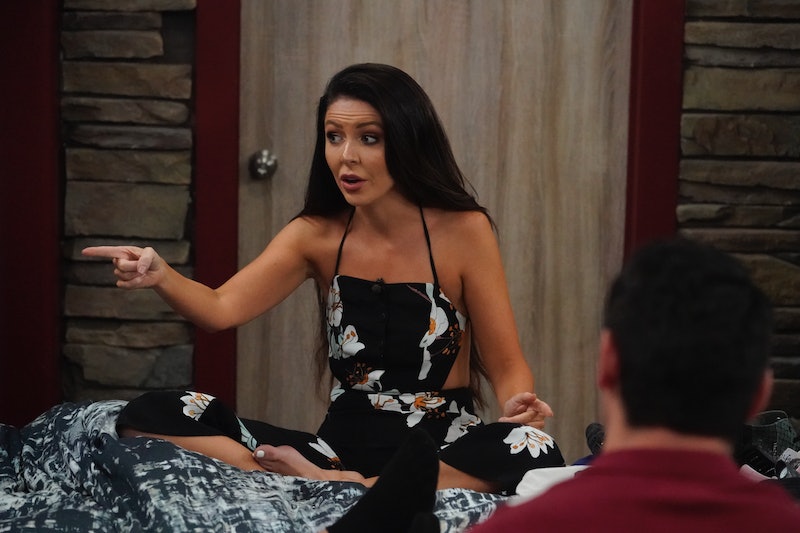 This week, the Big Brother houseguests aren't the only ones playing the game. Fans can vote for America's Prankster on Big Brother 21 and totally mess with this week's HoH. Host Julie Chen announced the new twist on Thursday's Aug. 22 episode, and it gives the viewers so much power.

As Chen would say, "And here's how it works:" Viewers are allowed to start voting (through this link here) for America's Prankster from now through Aug. 23 at 12 p.m. ET. It's a pretty short voting timeframe, but that's because it affects the nominations, which will occur in real time on Friday, Aug. 23 and will be shown during the Sunday, Aug. 25 episode. Fans can vote up to 10 times per day, which means if you vote now and also tomorrow morning, you can get 20 total votes in. The player with the most votes will be named America's Prankster, and they get to hijack half of the HoH's reign.

The new HoH is Holly, so viewers cannot vote for her to be the Prankster. Any of the other houseguests are available as options, including Michie, who Holly is in a showmance with. Once chosen, the Prankster will get to secretly choose one of the nominees to be put on the block, thereby eliminating one of Holly's nominees. It's unclear if she will get to choose which of her two nominees gets to stay on the block or if she will be told ahead of time that she can only pick one nominee. All will be revealed on the Aug. 25 episode.

But that's not the only power the Prankster has. If the Prankster's chosen nominee comes off the block during the Veto ceremony, the Prankster gets to choose the replacement — not the Head of Household Holly. It's a pretty significant amount of power, and Holly is already worried that this Prank Week is going to mess with her HoH plan. "I'm scared of them hijacking my HoH," she said on the feeds. "If I don't get to pick noms or something." Well, she'll get to pick one nom at least. The Prankster will pick the other one.

How this affects Holly's plan will depend on who is named the Prankster. If it's one of her allies, perhaps they'll let her in on the secret and allow her to help choose the second nominee. (After all, these houseguests can pretty much never keep secret powers to themselves.) But if it's someone she's not working with, they could put up one of her allies, like Michie, and totally jeopardize her game moving forward.

Naming one nom and the nom's replacement are the only powers the Prankster will get this week, but it isn't the only part of Big Brother's Prank Week. On Wednesday's Aug. 28 episode, Zingbot is coming to roast the houseguests before the Veto ceremony. Between Zingbot and America's Prankster, the houseguests are in for an interesting week both on the live feeds and on TV. And Holly better buckle up, because this HoH will be anything but smooth.

More like this
Zach Addressed His "Boring Bachelor Energy" After His Group Date With Latto
By Grace Wehniainen
Here's Everyone Who Will Be Competing In 'Survivor' Season 44
By Brad Witter
Megan Mullally & Nick Offerman’s Relationship Includes Several Collaborations
By Caitlin Gallagher and Brad Witter
Everything To Know About 'RHONY' Season 14
By Jake Viswanath, Alyssa Lapid and Brad Witter
Get Even More From Bustle — Sign Up For The Newsletter
From hair trends to relationship advice, our daily newsletter has everything you need to sound like a person who’s on TikTok, even if you aren’t.