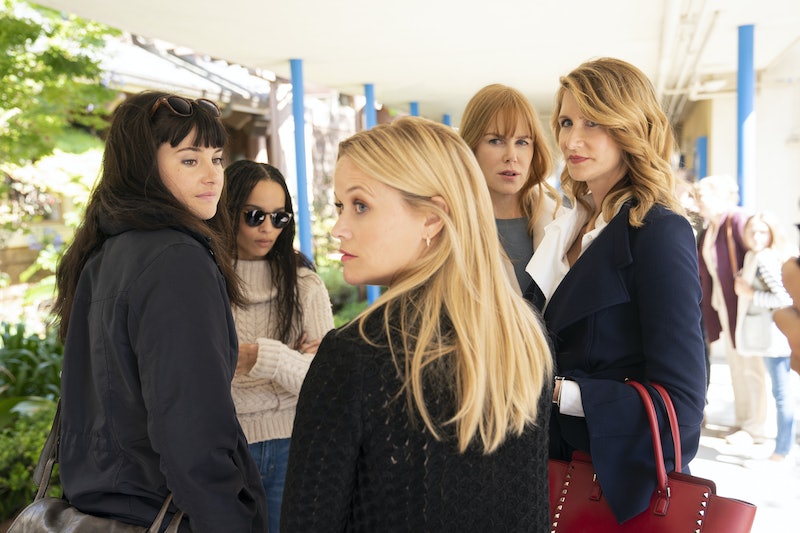 When Big Little Lies season one premiered in Feb. 2017, it took the world by storm. With talents such as Reese Witherspoon, Nicole Kidman, Laura Dern, and Shailene Woodley at its forefront, the show was bound to be a success, but the complex and confronting plot lines had people tuning in religiously episode after episode. Now fans are hungry for another season, and the TV gods have answered their prayers. Big Little Lies season two has been confirmed, so it's time to start preparing, and making sure you know how to watch Big Little Lies season two in the UK. Because you can't afford to miss out.

Big Little Lies fans have had to wait two years to be reunited with quite possibly the dreamiest cast in recent TV history. Season one's cataclysmic finale first aired on April 2, 2017, as Bustle reported, and the long awaited first look for season two finally arrived in the form of an intriguing trailer on Sunday, April 14, which HBO released on their official YouTube.

In a statement sent to Bustle following the trailer's release, it was confirmed that the second season of Big Little Lies will be debuting on Monday, June 10 on Sky Atlantic at 9 p.m., as well as on NOW TV, courtesy of HBO.

If you have neither of those options available, but you're desperate not to miss out, then you might want to consider signing up for Sky, with packages starting from £22 a month, according to their site. Alternatively, you'll be able to stream the second season of Big Little Lies on NOW TV, with subscriptions starting from £7.99. A seven day free trial is also available.

Signing up for one of these services is seriously worth considering, as Big Little Lies season two is set to be the only thing people are talking about this summer. According to the statement sent to Bustle, the show's second season will "explore the malignancy of lies, the durability of friendships, the fragility of marriage and the vicious ferocity of sound parenting," so it's definitely in keeping with the tone of the first season, but I reckon this season will be taking things up a notch. "Relationships will fray, loyalties will erode… the potential for emotional and bodily injury shall loom." Gulp.

I am seriously ready for another trip to Monterey, especially since it was revealed that *the* Meryl Streep would be joining an already out-of-this-world cast. That piece of news — probably the best I've had in 2019 — was announced by HBO in January, 2018, and now we finally know when we'll get to see Streep starring as Mary Louise Wright, a "grieving mother of recently deceased Perry (Alexander Skarsgård), who comes to the secretive suburb in search of answers after her son’s death."

In the meantime, I reckon you definitely can't go wrong with another Big Little Lies marathon. It's the perfect way to get in the mood of the shady seaside drama before what's sure to be one of the year's best TV series returns.