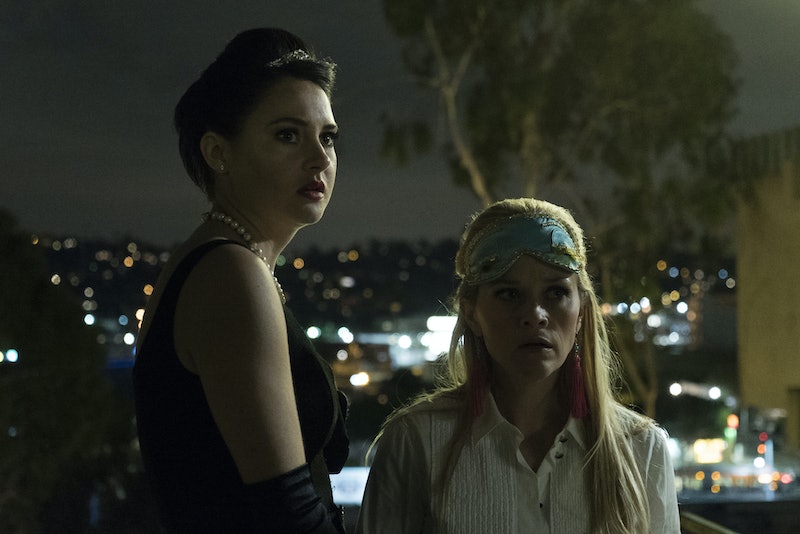 When Big Little Lies first introduced the main characters of Madeline, Celeste, Jane, Renata, and Bonnie, the viewer's perception of the women was influenced by the other parents in attendance at the Otter Bay trivia night. In this way, the Monterey, California that exists in Big Little Lies acts as a microcosm for how the world treats many women — in the case of this series, specifically privileged women. The juxtaposition of what the other parents said to the police in the interrogation room (director Jean-Marc Vallée called them the "Greek chorus" to Vulture and in an HBO video about the finale) and what really happened shined a light on the harsh way women and their relationships with other women are judged.

In the very first episode, "Somebody's Dead," you saw how Witherspoon's Madeline Martha Mackenzie was a far more complicated person than what the Greek chorus made her out to be to the police. Yes, she was antagonistic and aggressive, but she had a lot of built-up resentment toward and insecurities about her ex Nathan that made her act out in self-righteous ways. From that very first episode when you saw Madeline was more complex than what the Greek chorus portrayed her as, it was up to the audience to distrust the prejudices of that chorus as they provided a satirical voice of common attitudes that people have toward women and female friendships.

Beyond the Greek chorus misrepresenting the complex dynamics that existed between Madeline, Celeste, Jane, Renata, and Bonnie, their fixation on how vicious these five women were to one another also acted as a red herring. Could one of these five women be capable of killing one another if they truly resented each other so much? But instead, the opposite was true: These five women were willing to physically be harmed to protect each other and this female solidarity is what led to Perry being the one to die.

While I do like my finales to be a little less obvious and textbook perfect (I preferred the unsatisfactory ending of The Night Of since it's more true to life), the miniseries provided closure by telling one complete story in seven packed episodes. Sure, you may have figured out that Perry had raped Jane and that Celeste and Perry's son was the bully before the series finale, but in reality, seeing all five women unite in the end was the real twist.

Since I could go into the dynamics of each and every woman with one another and how emotionally truthful these dynamics were, I'll stay focused on Madeline and look at how her relationship with Renata progressed over the series. Madeline was already fiercely protective of her friendships with Celeste and Jane, but she was full of animosity toward Renata and Bonnie. Yet, Big Little Lies showed that a lot of this animosity wasn't just because she was spiteful, it came from her own insecurities — something that even Madeline could admit on a good day.

As the dominant personalities, Madeline and Renata clashed the most and while these characters were far from perfect, their lives behind the closed doors of their beautiful oceanfront homes highlighted that they weren't cruel because they were cruel-natured humans. They were struggling with balancing the roles of mothers, wives, professionals, and friends. Finally, by the end of the miniseries, they respected each other as multifaceted women because they each showed a generosity that they hadn't revealed to one another before. This moment was essential since it came right before all of the women needed to defend themselves against Perry and cemented the fact that Madeline and Renata were able to let go of grudges and understand each other.

Although the murder mystery was what all of the action of Big Little Lies was hinged upon, the women and their relationships were the heart of the story. By having all five involved in Perry's death and then choose to call it an accident to protect Bonnie since she was the one to put an end to Perry's abuse proves that Big Little Lies wasn't about who killed whom, but about the strength of women and the unshakeable bonds between them.

Another factor that proves that the miniseries was all about female solidarity is that the Big Little Lies finale was slightly different from the ending in the book. While Bonnie still killed Perry in the book written by Liane Moriarty, the women didn't fight Perry like they did in the TV series. In the book, Bonnie intentionally pushes Perry after he hits Celeste because she came from a home where her father abused her mother. She confesses to the police that she pushed Perry and is sentenced 200 hours of community service.

By the women all being involved in battling Perry and protecting Bonnie by saying it was an accident, the focus of the HBO miniseries was on the women being a united front, who will do anything to protect one another. That isn't to say that Moriarty's book wasn't also about female solidarity since the women did want to lie to the police for Bonnie, but the TV series didn't want to take anything away from the beauty of female unity in the end.

Even if the ending of Big Little Lies wasn't the most realistic, the portrayal of domestic abuse and female friendships was. Despite what the Greek chorus said, these five female characters were far more nuanced than just being catty or vindictive toward one another. As the ending of Big Little Lies proved, the sometimes complicated nature of women can lead to some of the most meaningful and supportive relationships of your life.

That brings me back to the image of Jane running alone and then being flanked by Madeline and Celeste. Like the waves they run along, these women are stronger together and a force to be reckoned with. That's what director Vallée definitely wanted to get across with the imagery of powerful waves being integrated into the women fighting Perry during his death scene — and Vallée achieved that message. Although women are often seen as being cutthroat when it comes to other members of their gender, the murder in Big Little Lies brought out the opposite of a supposed merciless nature in women — it brought out the genuine kindness and deep allegiance women have toward one another. Women are stronger together — something women have always known, so I'm glad Big Little Lies took the time to show it on TV.

More like this
'The Distant Echo’s Ending Mirrors 'Karen Pirie' In One Crucial Way
By Catharina Cheung
'The Walk-In' Revisits A Terrifying Real-Life Murder Plot
By Sophie McEvoy
The ‘Kevin Can F**k Himself’ Season 2 Finale Twist Is A Full Circle Moment
By Grace Wehniainen
At 28, Melanie C Was Falling In Love & Reclaiming Her Confidence
By Olivia-Anne Cleary
Get Even More From Bustle — Sign Up For The Newsletter