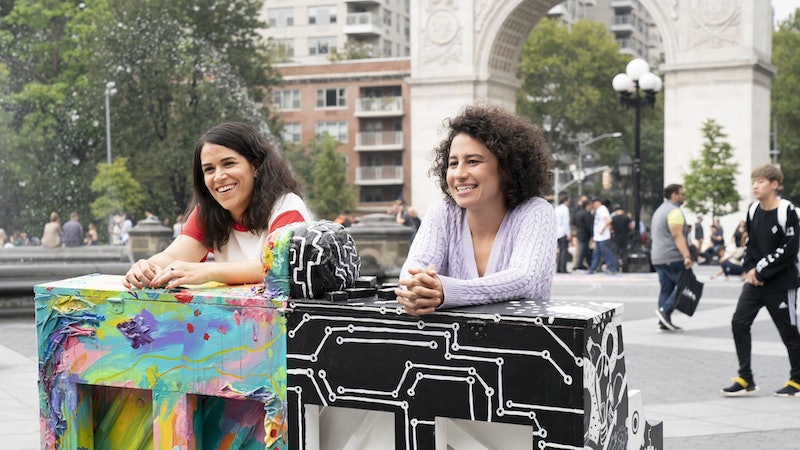 If you've never watched Broad City, you really are missing out. The comedy series — which follows the lives of two 20-something friends living in New York — is a journey through the heartwarming, horrifying, and downright hilarious moments that many young women go through. The new season is bringing out even more mixed emotions in viewers, mainly because it's the final one. So how can you watch Broad City in the UK and ensure you don't miss out on all the laughter and tears?

Broad City began as a web series starring Abbi Jacobson and Ilana Glazer, the two women who are still the central characters in the TV series. Despite building a staunch fanbase since 2009, it wasn't until 2014 that Comedy Central picked up the series. And, the UK had to wait over a year to be able to watch the first couple of seasons, according to the Guardian.

Thankfully, that gap has now closed and the UK is only one day behind the U.S. schedule. Season 5 is still shown on Comedy Central (a channel you should be able to find if you have a Sky, Virgin, or BT service) with the premiere airing on Friday, Jan. 25.

Jacobson and Glazer have promised an "uplifting and hopeful" ending to the series, reports the Hollywood Reporter. The real-life friends, who are now preparing to embark on other roles and projects, wanted the final season to show how the characters' lives have progressed.

Broad City has traditionally revelled in showing the difficulties of navigating everything from careers and relationships to general adulthood. Even the really boring parts of life, like picking up a parcel from a depot, are somehow transformed into entertaining storylines. But the fifth season is taking a slightly different path.

As Abbi and Ilana (yes, the characters are named after the real-life women) prepare to enter their thirties, they begin to think about the future and what they really want out of life. The friendship backbone of the series still remains, but expect deeper topics to arrive at the forefront. This doesn't mean the pair are suddenly, and unrealistically, going to become super successful women with high-flying careers, stable relationships, and pricey apartments over the course of the final 10 episodes, but it does signal that you may not be left wondering what their fate will be.

The season premiere sees yet another experimental episode from the co-creators. The entire thing was filmed in the style of an Instagram story, demonstrating how society avidly documents its experiences without really paying attention to them and the chasm between people's real and social media lives. In a way, it pays tribute to the start of the series. “Broad City wouldn’t exist without social media,” Jacobson told IndieWire. "It was created on YouTube, but then we spread it on Facebook — that's how anyone knew about it."

So is this really the end of one of the best female comedies to hit TV screens in recent years? Maybe not. In an interview with the Hollywood Reporter, Glazer and Jacobson were asked if they would ever reboot the series. "I think it’s just counterproductive for us personally and creatively to think about it right now," said Glazer. "I think we need at least a 15-year pause. This has been 10 years of our lives, and I can’t really imagine it quite yet, because we’re still in it. There are so many reboots and remakes. I love what it is right now."

Abbi and Ilana in their 40s? Sounds good to me.

Catch the final season of Broad City on Comedy Central every Friday at 11 p.m. from Jan. 25.