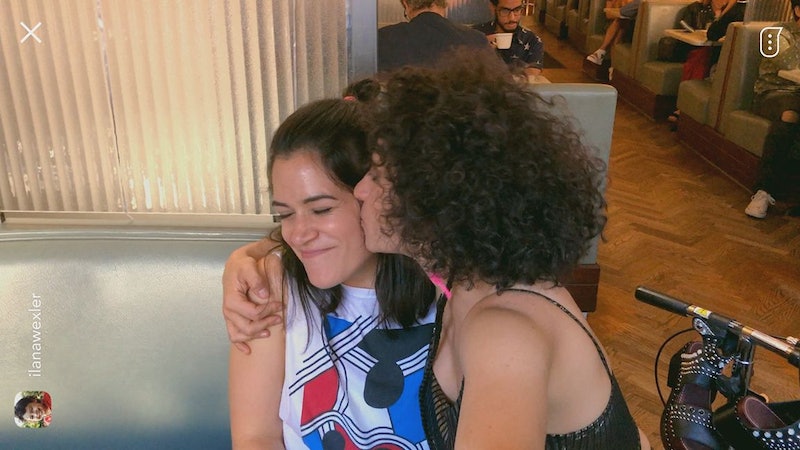 Spoilers ahead for the Broad City Season 5 premiere. There has, by now, been much to be said about how damaging social media can be, but it's hard to remember a single TV episode that captured it as effortlessly as the Broad City Season 5 premiere. For Abbi's 30th birthday, she and Ilana plan a trek from the "tippity top" of Manhattan to the "tippity bottom," and early on, Abbi reflects on how she had expected to be married with kids by this age. However, a run-in with an old college friend named Lindsay, aka Cheese, helps put things into perspective.

After Abbi and Ilana happen upon a young girl alone in the mall and head to security to find her parents, they're angrily confronted by her mom (you guessed it: Cheese), who accuses them of kidnapping her. Cheese tells Abbi to "grow up," but later reveals she's jealous of Abbi and Ilana — or at least, of the lives that they present online. "Running around the city with your little 'foibles' and your little 'mishaps' and your little 'shenanigans,'" she says, perturbed but clearly envious of their freedom. "Get over yourself."

The same goes for Abbi, who sees Cheese's life as the one she should be leading at 30: going on vacation, attending pizza parties, raising four kids. But Cheese eventually admits that she, too, is struggling, and they all opine how terrible social media is. Seeing only the positive, "perfect" aspects of each other's lives has negatively impacted both of these women's self-esteem — and that's unfortunately all too common.

While many social media users have probably experienced this firsthand, research, too, has started to confirm the adverse effects of social media on mental health. A 2018 study from the University of Pennsylvania looked at how using social media more can actually increase feelings of depression and loneliness, while a 2017 survey done in the UK showed that young people think Instagram is the worst perpetrator when it comes to mental health. Their findings concluded that seeing other people's seemingly exciting lives can make people feel inadequate. "These feelings can promote a 'compare and despair' attitude in young people," the report stated. And yet another UK survey showed that one-third of girls and young women feel the need to portray a "perfect" life on social media.

It's natural for people to only share the good things in their lives on social media: those are the things you want to celebrate, and sharing your personal struggles can be scary. But being on the other end of things without knowing what's going on with the person sharing their life makes it easy to fall into that dangerous mindset that you're not doing enough, or that you aren't enough, or that someone is somehow better than you — when, really, everyone (yes, everyone!!), has their own ups and downs to deal with.

This is especially complicated when you consider the societal pressures of meeting certain life milestones, such as finding the right job, getting married, or, as in Abbi's case, having kids. But the grass is always greener, and it turns out that neither Abbi or Cheese is wholly satisfied with what they're doing — no matter what their social media accounts may indicate. Just as Abbi feels she should be further along in life in terms of "settling down," Cheese is envious of the independence Abbi still has.

Unlike Cheese (and many others), Abbi and Ilana aren't necessarily guilty of sugarcoating their experiences. In the bathroom at Abbi's birthday brunch at Russ & Daughters Cafe (yes, you can go there and get their tasty spread), Ilana happens to capture Abbi crying in the bathroom. "Birthday blues, they real y'all," Ilana writes. "I asked Ab if I should delete that, she said nah cuz she REAL."

But not everyone is as open to sharing things like their mental health struggles on social media, and that's OK too. What's important is to remember that when you're scrolling, you're most likely not seeing the full picture of people's lives. And while it may never have occurred to Abbi that people were out there having FOMO viewing her birthday story full of foibles, the same might be happening to people looking at your social media. So don't live your life comparing yourselves to others, and remember that practicing a little bit of empathy and supporting others can go a long way — even with someone who seems as mean as Cheese.