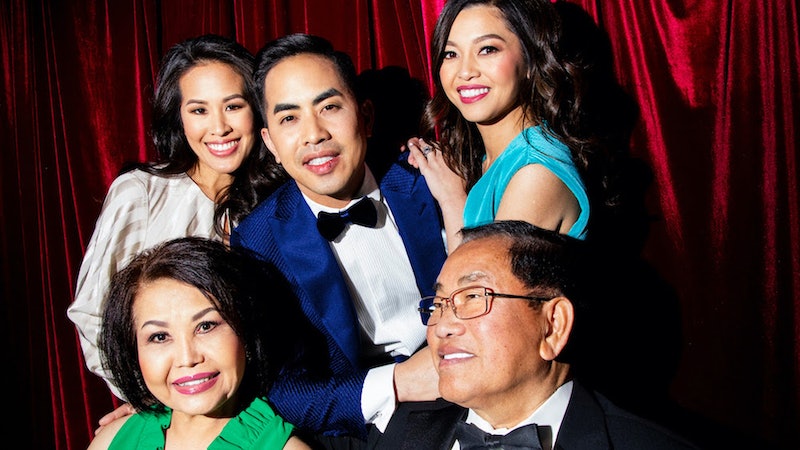 Inspired by the hit 2018 romcom Crazy Rich Asians, HBO's latest docuseries The House of Ho follows an opulent, over-the-top immigrant family who sit atop a multi-million dollar empire. The new series is scheduled to debut in mid-July over in the States, and if you're wondering how to watch The House of Ho in the UK, here's what we know so far.

Unfortunately, there is yet to be an official announcement regarding the show's UK airdate. I have reached out to HBO for comment, and will update with any new information the minute it becomes available. However, considering the U.S. air date isn't until July 16, we could be looking at late summer at the earliest. Boo.

As Variety reports, the upcoming series centres around the lavish lifestyles of the Ho family, led by patriarch Binh and wife Hu — both of whom immigrated to the U.S. from Vietnam. After arriving in the country with close to nothing, the Ho's went on to build a multimillion-dollar fortune, becoming the epitome of the American dream.

The eight-part docuseries offers viewers a peek inside the lives of the affluent Ho clan, displaying their deep family bonds and multi-generational dramas. As Deadline reports, Ninch and Hu are joined in the show's cast by their perfectionist daughter Judy, former-playboy son Washington, his outspoken, yet down-to-earth wife Lesley, outgoing aunt Tina, and cousin Sammy, who is known for living in the moment.

"Rarely do you come across a family that is so rich in so many ways — not just in wealth, but in heart, traditions and love for each other," said Jennifer O’Connell, the Executive Vice President of Original Non-fiction and Kids Programming at HBO Max.

"There’s great pride in being a Ho and they are ready to give the world a seat at their luxurious table," she added, discussing the channel's latest offering.

Although we're still waiting on that UK airdate, various other HBO-produced shows, such as Big Little Lies, among others, have eventually made their way over to this side of the pond. So fingers crossed The House of Ho arrives here soon.