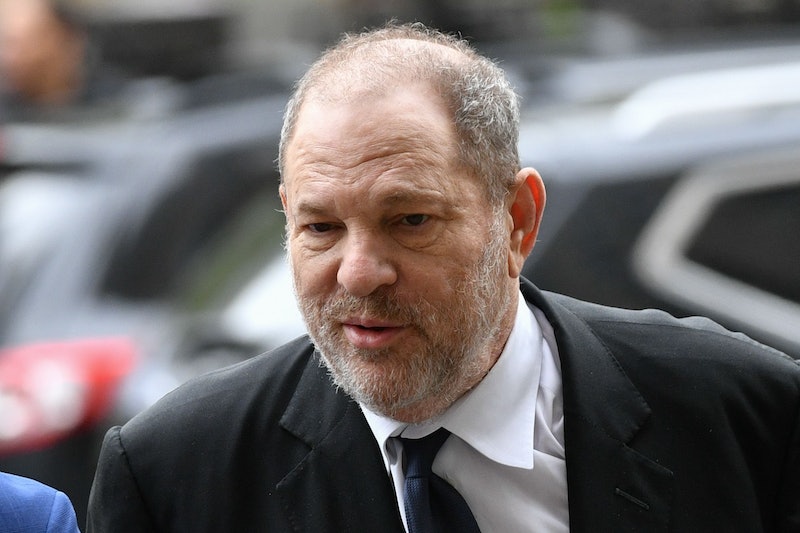 Allegations surrounding Hollywood mogul Harvey Weinstein rocked the world back in 2017, and went on to inspire the international Me Too movement. In an attempt to offer further insight into the rise and fall of Weinstein, the U.S. streaming platform Hulu are set to release a brand new documentary, Untouchable. The doc will examine more than 80 accusations of sexual assault made against the movie producer. So, if you're eager to learn more about one of the most shocking cases in show business, here's how to watch Hulu's Harvey Weinstein documentary in the UK.

According to Variety, the documentary is scheduled to be released on Monday, September 2, 2019, in the U.S. and on Friday 19 July it was announced that the documentary will be broadcast on BBC Two in September. An exact date has not yet been provided, but Bustle will update this article when an exact date and time is confirmed.

According to TVLine, Untouchable will delve into more than 80 accusations of sexual assault made against the former Hollywood studio boss. Throughout the Hulu documentary, many of his accusers, including actors Rosanna Arquette and Paz de la Huerta, will come forward to share their personal stories. Untouchable will also cover the emotional aftermath faced by the alleged victims, and feature interviews with the reporters who initially broke the story.

In addition to Ask Dr. Ruth and Jawline, Hulu's Untouchable is now the third 2019 Sundance documentary to be acquired by the streaming platform, which is now fully controlled by Disney. The doc is produced by the London- and LA-based production company Lightbox, and the company's co-founders, Simon and Jonathan Chinn, recently expressed their joy at Untouchable being picked up by the U.S. streaming service. Speaking to Variety, they said:

"We are thrilled that Untouchable has been acquired by Hulu, which is the perfect home in the U.S. for a film that should serve both as a cautionary tale for the younger generation and an enduring example of how seemingly unchecked power can be held to account when courageous people choose to speak out."

According to Deadline, the documentary was directed by Ursula Macfarlane, who reportedly jumped at the opportunity to tackle one of the biggest stories to emerge in the past decade. Speaking at Deadline's Sundance Studio, Macfarlane revealed that the process of making Untouchable was "very tense," and described the doc as being "one of the hardest things" she's ever done. However, the director was determined to translate the story from print to screen, as she believed audiences would then properly connect with those who came forward with accusations against Weinstein. Speaking at the event, Macfarlane said:

"There was amazing journalism that made this story happen, but when you’re watching a film, and you’re seeing them speak, You feel a massive responsibility, but it’s so powerful to an audience, I think they understand it better than they do from reading an article."

As Untouchable makes its debut across the pond and then later in the UK on BBC Two, let's hope that those involved in the sexual assault case finally feel that their voices have been heard.