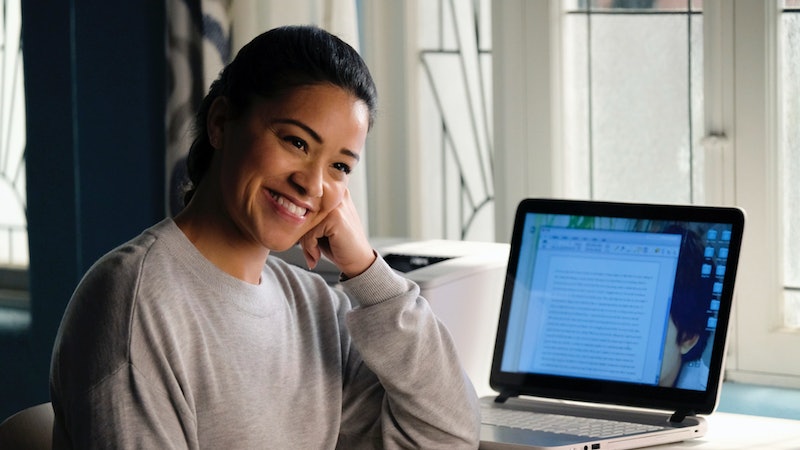 The fifth and final series of the comedy-drama Jane the Virgin is scheduled to begin airing in the U.S. this week. The new series will address any unanswered questions viewers may have following last season's shocking series finale — but fans in the UK might be wondering exactly when the U.S. series arrives on this side of the pond. Well, it's coming sooner than you think, and here's how to watch Jane the Virgin season five in the UK.

All four previous series of Jane The Virgin have been available to watch on Netflix in the UK (and still are if you fancy catching up!) However, it's not yet clear when and if the final series will drop. I contacted a representative for Netflix who told me a UK air date has yet to be confirmed. According to Decider, a website dedicated to streaming content, the show usually arrives on Netflix only after all episodes have aired on its original network, The CW. As Vulture reports, there are 19 episodes in the final series and they will air weekly from March 27 in the U.S., which means UK viewers could be waiting until September at the earliest for the show to drop. Sad face.

Some of the lead characters returning to the show's fifth season are Gina Rodriguez as Jane Villanueva, Justin Baldoni as Rafael Solano, Andrea Navedo as Xo Villanueva, and as in previous seasons, an all-star lineup of celebrity guests are expected to make appearances throughout the final series.

Rumours that Jane the Virgin would come to an end in 2019 first emerged in March last year, reports Cosmopolitan, after Rodriguez referred to the upcoming series as the "final" season whilst speaking at an event in Texas. Brad Silberling, who works as an executive producer on the show, then reiterated Rodriguez's comments, and also referred to season five as the "final" series. However, according to Variety, it wasn't until May 2018 that the show's network, The CW Network, officially announced that Jane the Virgin would be coming to an end.

The series was cancelled alongside other CW shows such as iZombie and Crazy Ex-Girlfriend, and president of the network, Mark Pedowitz, previously addressed the multiple cancellations. He told Variety, "We will miss each of those shows in terms of what they’ve done. They’ve helped the perception of the CW across the board."

Some season four spoilers lie ahead, look away now if you're still catching up.

According to the Express, Jane the Virgin season four concluded with the shocking revelation that Jane’s supposedly deceased husband Michael (Brett Dier) was back. Unsurprisingly, the discovery led to some problems within Jane and Rafael's relationship — and season five promises to explore the fallout from Michael's unexpected return. An official synopsis for Jane the Virgin season five reads: "Jane (Rodriguez) makes a shocking discovery and looks to Rafael (Baldoni) for answers but is confused by his decision to put everything he and Jane have on hold. Meanwhile, Petra (Yael Grobglas) is trying to secure a future with the hope of it being with JR (guest star Rosario Dawson), but her past might jeopardise everything."

In an interview with Deadline, the show's creator, Jennie Snyder Urman, promised that Jane the Virgin fans can expect to enjoy some of her best work throughout the final series. Urman also stated that viewers can look forward to a satisfying ending. Speaking at the Vulture Festival in Los Angeles, she said, "It’s some of our best stuff ever. We're very proud of the episodes. I pitched the way it’s going to end when I pitched the show, we’re on the path that was the story I felt like I wanted to tell, so it’s exciting, because we’re getting to that ending."

Although saying goodbye to this fantastic series isn't going to be easy for us fans, it sounds as if we've got a lot to look forward to in Jane the Virgin series five. And I, for one, cannot wait.