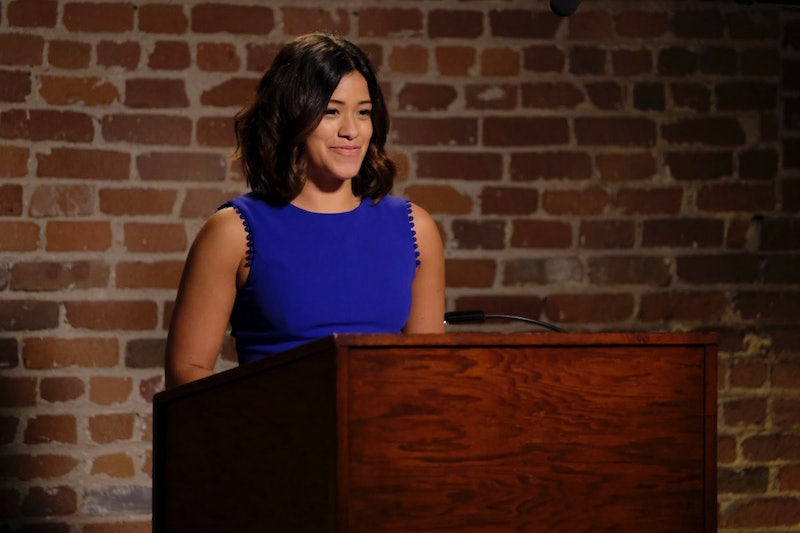 The final season of Jane The Virgin is currently underway, and the airdate of the last-ever episode has been revealed. The final series promises to tie up any loose ends viewers may have, and will (hopefully) be the perfect send-off for the characters we've come to know and love over the past five years. Viewers in the UK had a delayed start to season 5, and might now be wondering exactly when they can expect to say goodbye to the hit series. So, here's how to watch Jane The Virgin's final episode in the UK, because you don't want to miss out on this historic TV farewell.

Good news Jane The Virgin fans, because all five seasons of the hit series are currently available to stream on Netflix UK. Because the fifth series is still airing across the pond, viewers are currently waiting for the final few episodes to be released on the streaming platform. However, fans don't have too long left to wait, because according to the Netflix UK schedule, the final ever episode will be made available to Netflix subscribers on Thursday, June 24 in the UK.

UK viewers can also catch Jane The Virgin on Amazon Prime, however, only the first three seasons are currently available to enjoy on the service.

The last episode of Jane The Virgin is titled "Chapter Ninety-Four," and according to iNews, an official synopsis of the final series reads, "Jane (Gina Rodriguez) makes a shocking discovery and looks to Rafael (Justin Baldoni) for answers but is confused by his decision to put everything he and Jane have on hold. Meanwhile, Petra (Yael Grobglas) is trying to secure a future with the hope of it being with JR (guest star Rosario Dawson), but her past might jeopardise everything."

According to Digital Spy, the U.S. series originally aired on E4 in the UK, however back in 2017 the show was dropped from the channel's lineup. Since then, Jane The Virgin has been available to watch on Netflix UK, and as we approach the end of the series, many fans are hoping to finally discover the identity of the show's narrator.

As reported by the Express, series creator Jennie Snyder Urman previously hinted that the narrator's identity would be revealed in the final season. Speaking to the The Hollywood Reporter back in 2014, she said, "You know, I know who the narrator is, I just can't say really much more than that. I'll give it a 'maybe'. The narrator does have a connection to the narrative; the narrator is specific, and he is a person, and as we go on, we do experiment more and more with his point of view, and there is a link, but I'm not ready to get into it yet."

During an interview with the New York Times, the show's executive producer also stated that the series was not originally intended to run for a full five seasons, and revealed that studio executives were "really supportive" of her creative journey. Speaking to the publication, she said, "When I first thought about the show, I thought it would run four years, and then after the second year, I thought, 'We have enough to take us through five seasons.' We started to have those discussions in Season 3. The studio and the network were always really supportive."

It sounds as if show runners had full reign over the direction of the final season, so let's hope that Jane The Virgin wraps up in a way that satisfies us long-standing fans. Finger crossed.