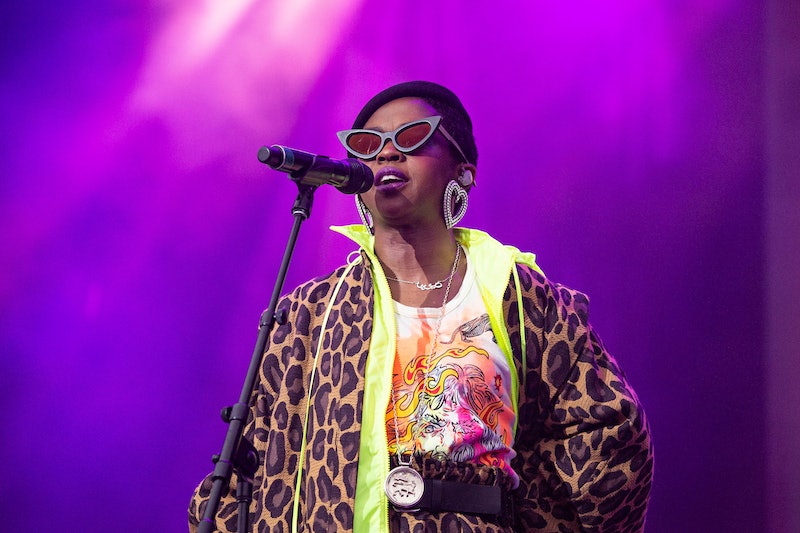 As one of the biggest festivals on the calendar, grabbing tickets to Glastonbury isn't exactly the easiest thing in the world. But even if you're not heading down to the Somerset fields this weekend to see the acts live, you don't have to miss out thanks to television coverage. And you won't want to this year, as the legend that is Lauryn Hill will be taking to the Pyramid Stage on Friday. So here's how to watch Lauryn Hill's Glastonbury performance on TV, especially as this year marks the 20th anniversary of her debut solo album, The Miseducation of Lauryn Hill.

As always with Glastonbury coverage, BBC has the nation's back and will be broadcasting live over the weekend. Hill's set will begin at 6 p.m. and end at 7.15 p.m. and will be broadcast on BBC Two. And don't worry if you're not going to be near a TV during Hill's performance, as you'll be able to experience it in a multitude of ways thanks to the Beeb.

As the broadcaster states, for viewers wanting to watch Hill perform on the go, "BBC iPlayer will be streaming over 100 performances from across the main stages [...] which viewers can access on their computers, tablets, mobiles and connected TVs." You'll also be able to listen to the singer's performance on audibly thanks to BBC Sounds, with this year marking the first time that the platform has been used for the festival.

"For the first time, listeners can hear Glastonbury delights 24 hours a day, all at the touch of a button on BBC Sounds," Launch Director of BBC Sounds Charlotte Lock told the broadcaster. "Our curated BBC Radio Glastonbury stream will be live from Thursday through to Monday, making BBC Sounds the place for music fans who want an access all areas pass." And while the Beeb haven't specifically listed which radio station to listen to for Hill's performance, it seems that BBC Radio 1 and Radio 1Xtra will be your best bet. So rest assured, wherever you're going to be this Friday you'll deffo be able to catch Hill live on the Pyramid Stage.

Despite only releasing one studio album in 1998, Hill has certainly left her mark on the music industry with both her solo work and for being a member of the iconic hip hop group the Fugees. Her music has made her a pretty sought after act for festivals this year if her social media is anything to go by, and as co-organiser of Glastonbury Emily Eavis said during an interview with BBC Radio 6 Music, she has "been trying to get [Hill] for ages."

2019 might just be the perfect year for Hill to be one of the main acts of Glasto, especially since Eavis has been pretty vocal that "there aren't enough female headliners" at the festival. "It's time to nurture female talent. Everyone wants it, everyone's hungry for women, but they're just not there," she told BBC Music in March. "We're nowhere near where we need to be. We're making slow progress, but there's still a long way to go."