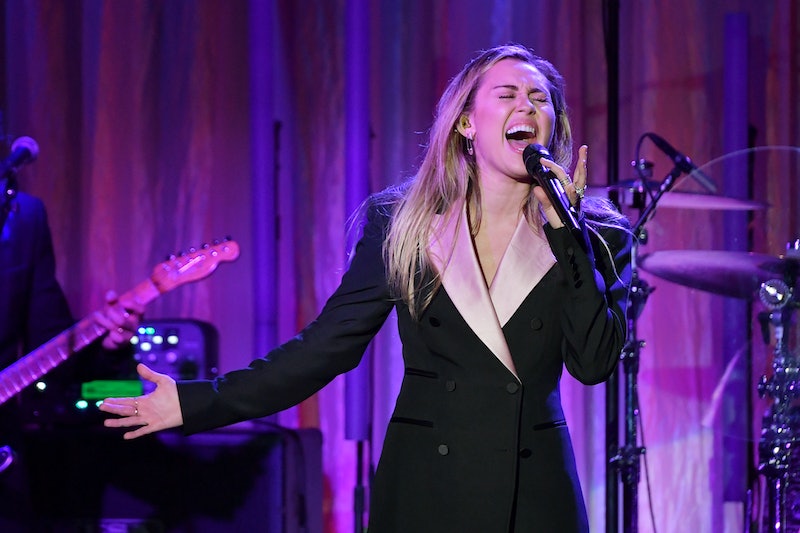 Let's face it, you never really know what to expect from a Miley Cyrus gig. Whether it's tongues out and bums out or something more country, there's no doubt that the internet will blow up no matter what she does. That's why you really won't want to miss the artist once known as Hannah Montana when she plays Glastonbury festival. It's my theory that no musician on Earth is greater placed for live tweeting and analysis, so here's how to watch Miley Cyrus' Glastonbury set on TV, because you'll want to be one of the first to get those memes in.

According to the BBC, playing the Pyramid stage at Glastonbury has always been on the singer's bucket list. You can watch her debut performance on Worthy Farm which follows Kylie Minogue's legendary set. Cyrus is on 5:45 p.m. to 6:45 p.m. with highlights due to be broadcast in BBC One's coverage of the festival which starts at 6 p.m. Alternatively, you'll be able to watch a live stream of Miley Cyrus' performance, if you're in it for the long haul and not just the highlights, by tuning into the BBC's livestream of the Pyramid stage.

By the sounds of it, Cyrus has got a knockout show in store. "I've put everything in order to make sure it is the best experience I could have because it's one event that is a real goal for me," she told the BBC on May 26, 2019, adding: "Nothing will get in my way to make sure it's the best time it could possibly be not just for me, but for the audience too." I have faith that this could well be a performance for the history books.

While it'll be her first time taking to one of Glastonbury's stages, it won't be Cyrus' first festival performance. Her set at BBC Radio 1's Big Weekend in Middlesbrough on May 25, 2019 proved that she felt right at home in the festival setting, as she donned some very extra sunglasses that looked as though they were cut from a visor hat, while throwing the crowd there into a frenzy.

While that performance might have given a taste of things to come, as one of pop's most unapologetic shapeshifters, no one can truly predict what Cyrus will bring to the Pyramid stage on late Sunday afternoon. I mean, of course she'll bring the hits. You won't be getting your money's worth if you don't hear a bit of "Wrecking Ball," or her latest hit with Mark Ronson. In fact, the DJ told BBC Radio 2 he's keen on making an appearance himself.

"I would love to make myself available for Miley Cyrus’ Sunday set at Glastonbury. I’m keeping the schedule clear in case she texts me back."

And no doubt super fans — Love Island cast member Tommy Fury among them — will be hoping Cyrus belts out "The Climb." Who knows, she might even bring Ashley O to the stage.

But since Cyrus seems to thrive on unpredictability and serving up something unexpected, the rest of my predictions are out. All you can do is tune in, and ride the new wave of Miley Cyrus memes with the rest of the world. Buckle up.