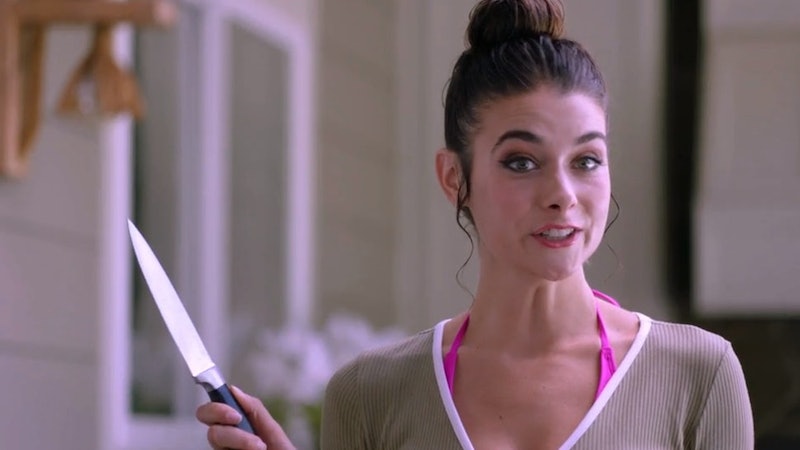 Lifetime's new string of women centred thrillers are set to bring a bit more terror to your otherwise quiet spring nights. Among them is the shiver-inducing My Killer Client, which follows a personal stylist who is unlucky enough to get herself a truly nightmare client. It'll have you biting your manicured nails in suspense, but since it's a Lifetime feature, you're probably wondering how you can watch My Killer Client in the UK, because you won't want to miss out while your U.S. pals get all the nail biting fun.

According to My Killer Client's official synopsis, the Lifetime Movie will follow the fictional character Christa Bright, an aspiring personal stylist who develops "an instant connection with new client Kat Niven, a shy woman who needs help gaining confidence." As you can probably glean from the movie's title, things between Niven and Bright go quite awry. As Bright soon discovers, her client just so happens to be her fiancé Jake's ex girlfriend, and she wants him back — even if the consequences are deadly.

As Bustle reports, the show premiered on Saturday, April 6 on Lifetime in the U.S. but is there any chance that My Killer Client will come to the UK?

I reckon there's a good chance of it happening, since, as Bustle reports, UK viewers do actually have Lifetime movies accessible to them. While Lifetime Movies aren't yet available for UK viewers to stream, there's a whole channel dedicated to them on Sky (channel 164), BT TV (channel 329), Virgin TV (channel 208), and Talk Talk TV (channel 329). Unfortunately, My Killer Client has yet to show up on Lifetime UK's TV listings, but I've reached out to one of the show's reps to see if and when it will. Stay tuned.

The suspense you'll feel waiting for it will be far outweighed by the tenseness of the movie. But don't get nightmares thinking about it. As Bustle wrote ahead of the movie's premiere, My Killer Client isn't based on true events, but it will refamiliarise you with that old jealous ex girlfriend trope.

While My Killer Client hasn't yet made its way over to the UK yet, Lifetime original Harry and Meghan: Becoming Royal — which features two uncannily similar Haz and Mez Markle lookalikes — might fill the gap if you fancy a romantic curveball.

As per the movie's official synopsis, the film will “pull back the curtain to reveal the untold joys and challenges of life inside the royal family during their pivotal first year of marriage. Beyond blending their families and cultures, Harry and Meghan’s core values are put to the test as they try to find the balance between honouring royal tradition and staying true to their beliefs.” According to The Sun, it will air on Lifetime in the UK on May 27. While it might not be My Killer Client, it could well be a sign that there are more Lifetime movies to come.