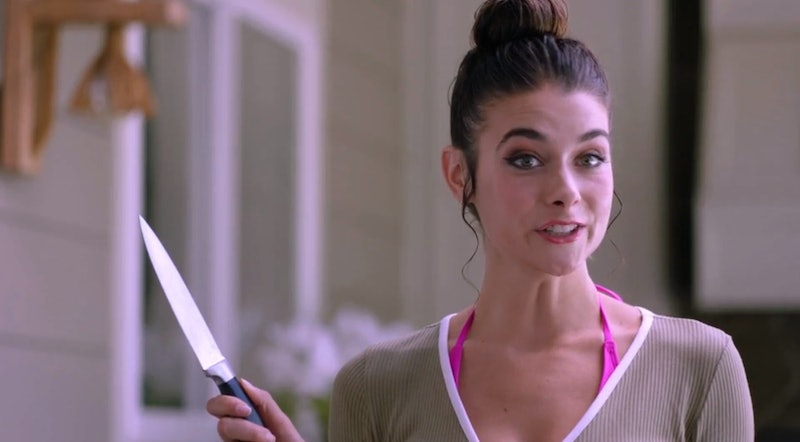 Lifetime is celebrating the spring season with a string of Saturday night thrillers starring women whose lives are turned upside down when they unknowingly get too close to a killer. The popular network’s latest movie, My Killer Client, isn't based on a true story. But it does tell a familiar story.

According to My Killer Client's synopsis, the movie follows Christa Bright, who's in the beginning stages of her personal stylist career when she meets Kat Niven, a shy woman with zero sense of style and low confidence. Christa amps up Kat's style game and the pair become fast friends, but things quickly go downhill when Kat starts to become a little too obsessed with Christa. It turns out that Kat is actually Christa's fiancé Jake's ex, and she wants to get Christa out of the picture permanently. Yep, it's the classic "psycho ex-girlfriend stalks new girlfriend to kill her" plot, but that's why we love Lifetime, right?

My Killer Client's trailer doesn't offer up a ton of details because it's short, but there's just enough there to give viewers a taste of what to expect. Kat, who is wearing platform sandals with socks, approaches Christa in a clothing store and asks for help with her fashion choices. Then, Jake is shocked to see his ex, who he calls "Katie," pop up at his front door.

A voiceover of Kat speaks directly to Jake about how she knows he has missed her over the years while Kat looks over her shoulder in a pink bikini. It's clear that she's trying to trap him into cheating, but it's not clear if he ever takes the bait. The clip shifts back to Christa asking Kat if she feels different in her new outfit, to which Kat responds that she feels "dangerous" and like she can "get anything she wants." Umm, are you not hearing this red flag, Christa? That's not a normal response to your question, girl.

Kat's behavior soon spins out of control: she smashes items in the street, then knocks someone out (or kills them) in a clothing store. She later hits an unseen person over the head and chokes a man who appears to be Jake before she pops up with a kitchen knife and asks if anyone wants dessert. Well, that escalated quickly.

As usual, the trailer leaves fans with a lot to speculate about as they wait impatiently for the full movie. Why did Kat and Jack break up in the first place? How many suspicious things will Kat have to say and do before Christa finally gets the hint? And how will Christa get Kat out of the picture for good this time? Knowing Lifetime, there will be a major fight at the end that will lead to Kat's ultimate downfall, but of course, predicting a Lifetime movie just isn't as good as actually watching it. Yeah, you can tell what's coming, but it's still entertaining as hell.

See it all go down when My Killer Client airs April 6 at 8 p.m. ET.