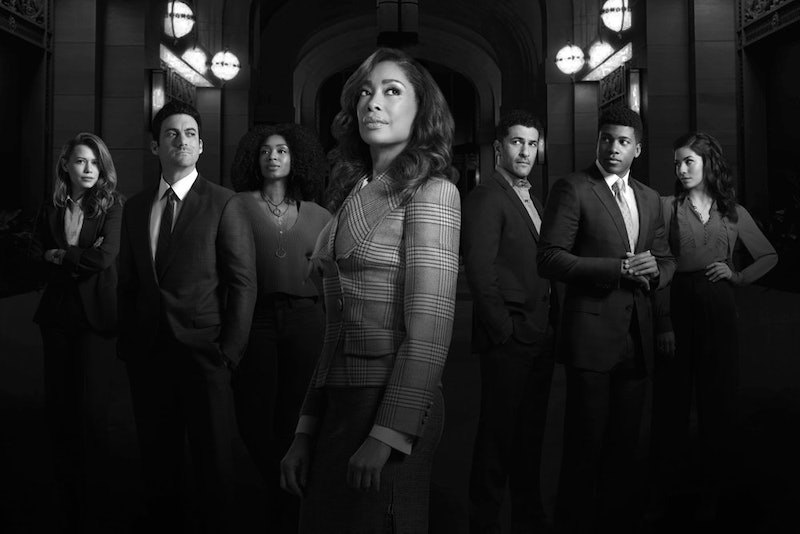 As the U.S. legal drama Suits draws to a close with its ninth and last ever season, fans can now begin to look forward to the show's upcoming spin-off, Pearson. The series will be led by actor Gina Torres, and will follow the character of Jessica Pearson as she enters the brutal world of politics in Chicago. Viewers on this side of the pond can currently enjoy the show's parent series on both Netflix and Sky, but fans might now be wondering how to watch Pearson in the UK.

According to the Express, the series will be broadcast on the USA Network over in the States, with the first episode of Pearson premiering on Wednesday, July 17. However, those of us in the UK might have to wait a while longer before the series reaches our shores, because a UK airdate is yet to be announced by the broadcaster. For more clarity on the matter, I have reached out to the network for comment, and will update with any new information once it becomes available.

An official synopsis of the upcoming spin-off reveals that Pearson will focus on the story of the recently disbarred NYC lawyer Jessica Pearson, who sets out on a new life in the dirty world of Chicago politics. According to the Express, the synopsis goes on to say, "Newly appointed as Chicago Mayor Bobby Novak’s (Morgan Spector) right-hand fixer, Jessica is quickly embroiled in a crooked and dangerous new world where every action has far-reaching consequences. With her compulsion to win, Jessica is forced to reconcile her unstoppable drive with her desire to do the right thing — two things very much at odds."

During an interview with Elle, the show's lead actor Gina Torres opened up about the Suits spin-off, and shed light on how the new series came to be. Speaking to the publication, Torres revealed that the idea behind Pearson actually came from her, and stated that she is "very happy" to refer to the series as "her baby." Torres also hinted that audiences can expect the character of Jessica Pearson to be explored on a deeper level throughout the spin-off, and when speaking about the character's portrayal in Suits, she said, "We never really got past her fabulousness. We never got past the fact that she was absolutely the smartest person in the room."

According to Deadline, the cast of Pearson also includes Bethany Joy Lenz, Simon Kassianides, Eli Goree, Isabel Arraiza and Chantel Riley — and the show's first episode will air back-to-back with the season premiere of Suits.

The premiere of Pearson is somewhat bittersweet, however, as it signals the end of parent series, Suits. During an interview with TVLine, actor Gabriel Macht, who plays Harvey Specter in the series, stated that he believes Suits could have "gone a bit longer." In the interview, Macht said, "I see where it could have gone a little bit longer, but I also see that nine years is, like… how often do any shows make it this far?"

Well, I for one would certainly would like to see a continuation of Suits, and thankfully, Pearson has arrived just in time — so let's hope this exciting new spin-off makes its way to the UK soon.

More like this
Yes, 'The Price Of Glee' Is Available To Watch In The UK
By Catharina Cheung
'The Last Of Us' Has Officially Been Renewed For Season 2
By Darshita Goyal
'Abbott Elementary' Fans Probably Missed This 'Parent Trap' Easter Egg
By Sam Ramsden
9 Time Catherine Cawood Was An Absolute Badass In Happy Valley
By Sophie McEvoy
Get The Very Best Of Bustle/UK
Sign up for Bustle UK's twice-weekly newsletter, featuring the latest must-watch TV, moving personal stories, and expert advice on the hottest viral buys.