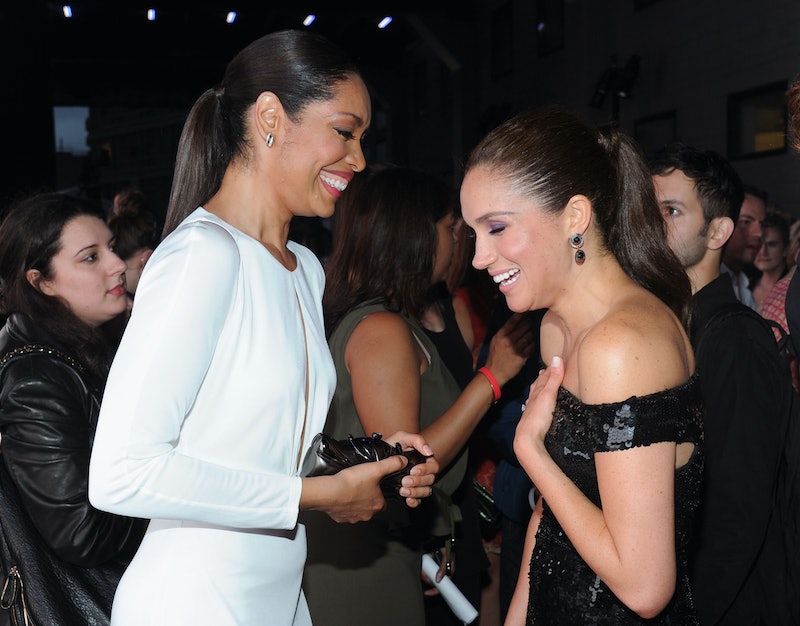 USA Network’s legal drama Suits is preparing to wrap up its story with summer with a ninth and final season. However, the show’s universe will continue to expand with Pearson, which debuts on July 17 and follows powerhouse lawyer turned political fixer Jessica Pearson into the corrupt world of Chicago politics. Of course, the Suits fandom and cast will be cheering on Gina Torres, who stars in and executive produces this new show. But everyone really wants to know what Meghan Markle thinks of Pearson and if she will be watching the show. The Duchess of Sussex obviously can’t hop on social media to talk about what's on her DVR, but she is likely happy for her former co-star and friend Torres.

Markle and Torres worked together on Suits from the show’s debut in 2011 until Torres left in 2016 to pursue other projects and be closer to her family. The disbarred Jessica Pearson came back for sporadic appearances, including a guest appearance from Chicago in Season 7 finale that features Markle’s character Rachel Zane’s wedding and subsequent exit from the show along with her on-screen partner Mike Ross.

In reality, Markle was prepping for her new chapter as a member of the British royal family through her real-life marriage to Prince Harry. Several of her Suits cast members, including Torres, attended the royal wedding, which was obviously one of the biggest events in 2018.

The Duchess may be busy with her new son Archie and easing back into public appearances, but she’s always supporting her gal pals. For example, she has been spotted rocking clothes from her friend Serena Williams clothing line as well as showing up to several of her tennis matches, including her recent Wimbledon appearance.

So, it wouldn’t be surprising if Meghan sends Gina Torres some sort of private well-wishes on her new TV journey. Meghan Markle probably won’t watch Pearson because she doesn’t watch Suits, but it’s kind of hard to keep up with shows when you are a new mom and royalty.

We may never know if The Duchess of Sussex tunes in to watch Pearson, but there’s a lot of reasons for people who love legal dramas to check it out. First, the show is making history as the first series to be created around and focused on an AfroLatina woman, per Essence. It’s a milestone that should have happened a long time ago, but it’s still worth celebrating for sure.

Suits fans will also get to dive into the personal life and psyche of the stylish and mysterious Jessica Pearson in a brand-new way. In a recent interview with The New York Times, Torres said this version of Jessica will be more vulnerable. “[In Pearson] we’re seeing a fully realized woman. We’re not used to seeing Jessica not being sure-footed in every single thing that she does. She’s going to win some, she’s going to lose some. There is a price that a person pays to live that kind of a life and to swim up those waters.”

However, those who are new to this world will still be able to jump into the action. Torres revealed to Variety that Pearson may be a spin-off, but it’s not a sequel to Suits. ““It was important for us to move into something else. It’s a legacy piece, it’s not a sequel. It’s not Suits Jr.,” affirmed Torres. “Jessica is really quite capable of standing on her own as a persona, as a character, in a new, fascinating world. As much as we would love for our Suits audience to move in and come along with that, we’re also looking forward to new people. You don’t have to be a fan of Suits to be a fan of Pearson.”

The Variety interview, which included commentary from Pearson showrunner Daniel Arkin, also revealed that the series would be a darker and gritter series in terms of storylines and cinematography. It’s going to be an intense ride, but Jessica Pearson can pretty much fix and scheme her way out of anything, right?

Meghan Markle’s thoughts about Pearson may be a mystery, but it’s nice to wonder if she will ever tune in to see Gina Torres take on this pivotal leading role. And, even if she never gets to watch Pearson, fans can rest assured that the loyal Duchess is always cheering her friends through their ventures.