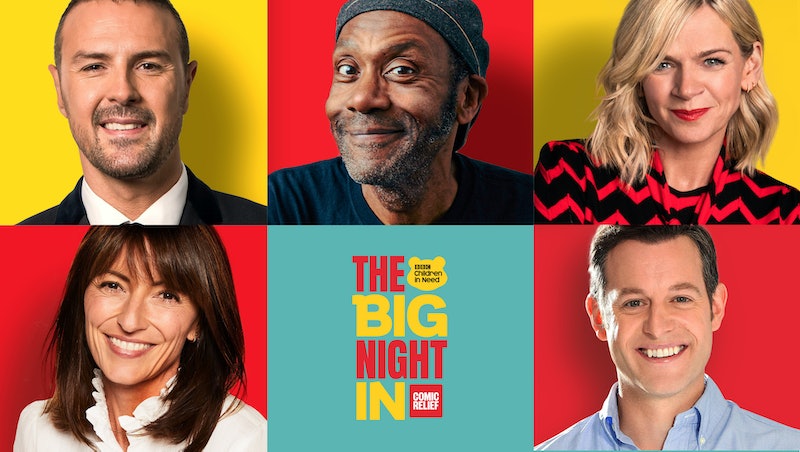 Four weeks of strict lockdown measures in the UK has certainly tested the nation’s spirits. Celebrities have been taking to social media to share their appreciation for frontline workers, and entertain followers. Some of the biggest names in British comedy are joining forces to celebrate the UK’s resilience amidst the COVID-19 pandemic, and bring the country together for one night (albeit virtually). So, how can you watch BBC's The Big Night In?

What is The Big Night In?

A whole evening of full-on entertainment, The Big Night In will feature some of the country’s favourite famous faces for big surprises, ‘money can’t buy’ prizes and live music performances (from the comfort of the artists’ homes, of course).

The three-hour show set to “to lift the nation’s spirits and support people who need it through this crisis” will raise funds through asking for donations from viewers and celebrate “those going the extra mile to support their communities” during the lockdown. “It will be an incredible night of TV filled with entertainment and emotion,” said Suzy Lamb, managing director of entertainment & music at BBC Studios. “This will be a chance to show our appreciation to all the services and heroes, while uniting two amazing charities.”

Why is The Big Night In taking place?

The Big Night In is being organised in collaboration with BBC’s biggest charitable partners, Children in Need and Comic Relief, which have come together for the very first time for a special night of entertainment. The money raised will be split between the two charities to provide support for local charities during the pandemic, making sure vulnerable people of all ages are safe, have access to food, warmth and shelter, and will also ensure that they are able to stay connected in order to combat isolation and loneliness.

How can I watch The Big Night In?

The star-studded event will be broadcast live on BBC One on Thursday April 23 and available on iPlayer after the event, whilst practising all of the government’s current COVID-19 guidelines, which could prove a logistical nightmare for producers.

Which celebrities are taking part?

Presenter veterans Matt Baker, Zoe Ball, Lenny Henry, Davina McCall, and Paddy McGuinness, have already been confirmed as the hosts of the event, and the BBC have announced that Peter Kay and Gary Barlow will also appear on the show from home, but it is unclear how the rest of the event will pan out under the current lockdown guidelines.

Elsewhere, the event ushers the return of some of the BBC’s most popular comedy shows to screens for one-time sketches to raise spirits during the lockdown; Doctor Who star David Tennant will reprise his role as the teacher from Catherine Tate’s Lauren sketch in which the enraged teen struggles with the difficulties of distance learning; and Matt Lucas and David Walliams will bring Little Britain back to the small screen for the first time in a decade, although which characters they will reprise will have to be a surprise on the night.

Is there anything else I should know?

The BBC have also provided free resources like colouring sheets ahead of the event, and are encouraging viewers to get involved in the Keep Dancing Challenge, where everyone at home learns a dance routine taught by the Strictly Come Dancing professional dancers, and upload it to social media with the #keepdancingchallenge hashtag.

Big Night In will be broadcast on BBC One on Thursday April 23, 7-10pm, and available on iPlayer after the event.