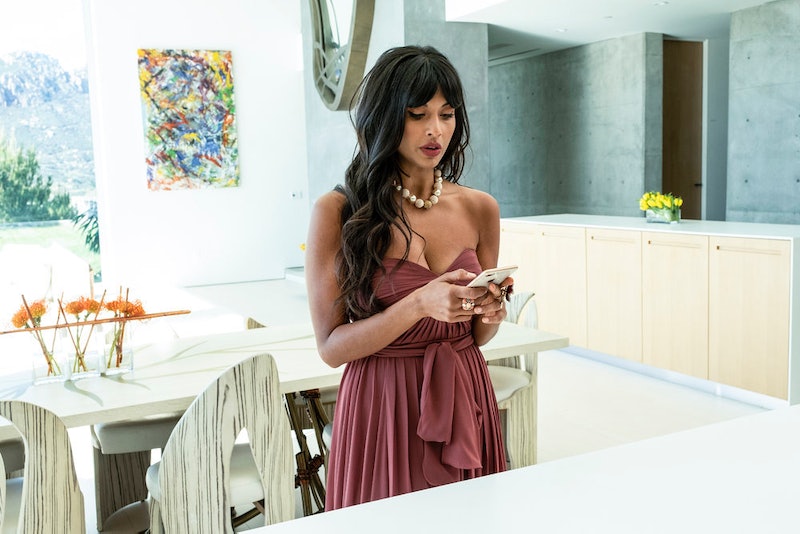 If you're a fan of all things television, comedy, and Kristen Bell (Veronica Mars, anyone?) there's a chance you've heard mumblings about American fantasy-comedy series The Good Place. The critically acclaimed series has a whopping 95 percent fresh rating on Rotten Tomatoes. So even if you haven't heard of it, maybe it's time you did. If you're wanting to get in on the hype surrounding the NBC show, here's how to watch The Good Place in the UK.

The series, which stars Bell, Ted Danson, and Brit Jameela Jamil, first hit screens back in September 2016 and follows the story of the recently deceased Eleanor Shellstrop, played by Bell, who arrives in "The Good Place" after waking up in a heavenly afterlife. However her arrival in the utopian universe, reserved only for "the best" people after they die, was down to mistaken identity, which forces Eleanor to hide her true identity and avoid being summoned to "The Bad Place."

If the unusual premise of the Emmy Award-nominated show has caught your interest, you're in luck, because the first two seasons of "The Good Place" are currently available to stream on Netflix.

If you've already marathoned your way through the first two seasons of "The Good Place" — which has gained somewhat of a cult following both in the U.S. and overseas — you'll be pleased to know that a third season, consisting of 13 brand spanking new episodes, was given the green-light in November last year. The new series will premiere in the U.S. on September 27, Radio Times reports, and those of us in the UK can expect weekly new episodes on Netflix to be uploaded just a few hours after airing across the pond.

The upcoming third series will continue on from the shocking twist seen last season's final episode. When speaking of the new season with the Los Angeles Times, Kristen Bell said:

“Metaphorically, this next season is about how you can play chess with people who don't know you're playing with them and doing so in a way that doesn't affect the greater universe.”

“Our characters don't know there's a greater mission,” she revealed. “We're meandering on Earth... all left on Earth separately. And what we learned from the first two seasons is that our strengths come when we're together.”

Despite missing out on any glorious trophies, The Good Place was recognised at last night's Primetime Emmy Awards 2018 ceremony — which saw a surprise onstage proposal during the broadcast — with two nominations for Ted Danson and Maya Rudolph in the Outstanding Lead Actor in a Comedy Series and Outstanding Guest Actress in a Comedy Series categories, respectively.

And it's not only the critics who have been raving about The Good Place. Fans of the acclaimed show have taken to social media to express their excitement at the forthcoming new season, and I can completely relate.

With fans still reeling at where the last season left off, now appears to be the perfect time to jump on The Good Place bandwagon, and if you haven't already - it's about time you did.