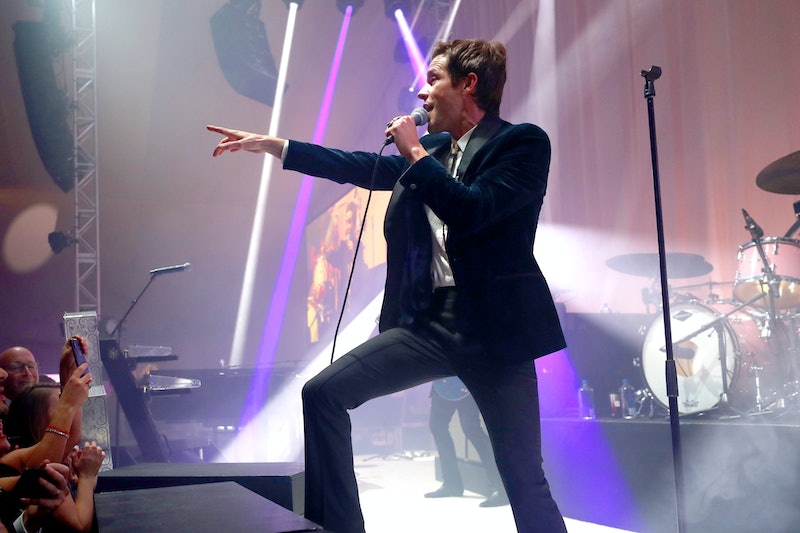 It's safe to say most Brits know the lyrics to Mr Brightside better than they know the national anthem. So obviously it made perfect sense to have American rock band The Killers headlining Glastonbury this year. Sadly, at this point, it's easier to land on the moon than it is to get a Glastonbury festival ticket. So for those who missed out on tickets to basically the best festival in the world, this is how to watch The Killers Glastonbury performance on TV this weekend.

The band, who hail from Nevada, will be performing their headline set on the Pyramid Stage on Saturday night (June 29 2019) between 9:45 p.m. and 11:45 p.m., just after Liam Gallagher. BBC Two will be broadcasting the whole set, so make sure you tune in to that and other headliner performances including Stormzy and The Cure. Plus, juicy highlights can be found on BBC Four. As BBC explains: "BBC Four will provide extensive and discerning coverage of highlights, plus live footage from key sets across the weekend ... BBC Four’s immersive, curated coverage kicks off on Friday night ... and then runs all Saturday and Sunday evening."

If you can't get to a TV on Saturday night, you can watch the best bits on BBC iPlayer.

Or perhaps radio is more your thing? Highlights from Glasto will be on Radio 1, Radio 1Xtra, Radio 2, Radio 5 live, and 6 Music.

The Killers, made up of lead singer Brandon Flowers, lead guitarist Dave Keuning, bass guitarist Mark Stoermer, and drummer Ronnie Vannucci Jr., formed back in 2001 and have been performing on some of the world's biggest stages ever since. Now on their fifth album (among other projects albums), I'm sure all of their best love tunes, and some niche songs for the serious fans, will make their way to Glastonbury. Hopefully we'll see appearances from "When You Were Young," "Human," "Smile Like You Mean It," and "Somebody Told Me." And obviously, if "Mr Brightside" isn't played on Saturday night, I'm sure Glastonbury will have a riot on their hands.

But this isn't The Killers first time at the rodeo. The quartet have performed on Worthy Farm four times before, making this their fifth time at Glastonbury. First was in 2004 on the New Tent stage, in 2005 on the Pyramid Stage, headlining in 2007, and performing on the John Peel stage in 2017. And the fact they are back this year is just further proof of how loved and awesome the band is.

Sadly, however, during the 2007 performance, the band had a few sound issues. Speaking to NME about their previous performance in 2007, the band said, "I think we can do better. We’ve played about 700 shows since then so we’re a better band with more songs now. We appreciate the tradition and what it means to headline Glastonbury. It’s huge." In 2017, they came back bigger and better than ever, and now fans can't wait to see what they pull out the bag for 2019.

The Killers aren't the only artists to perform at Glastonbury multiple times. Primal Scream have performed at least seven times, Radiohead have been heading to Glasto since the '90s, also partaking in secret sets. And, of course, Coldplay performing is just as commonplace as a mudslide at Glasto, as the band have done four headline shows.