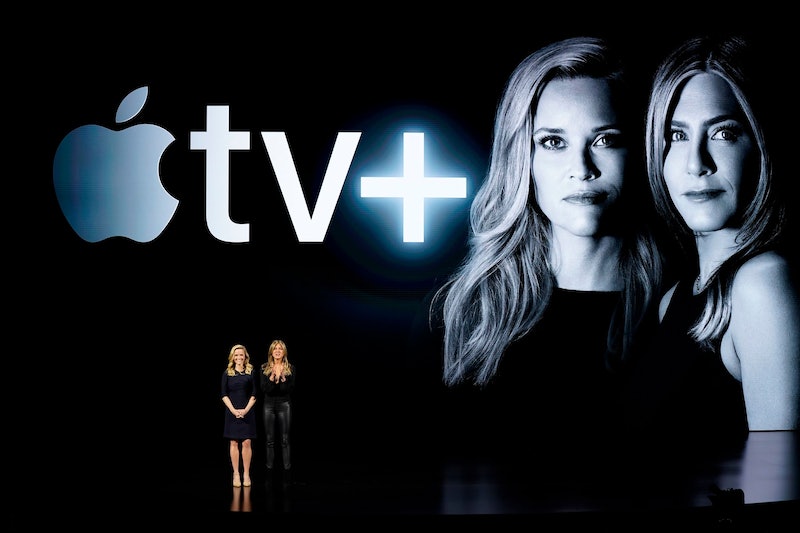 When reports come through that a new show is on the way, there are lots of factors that can immediately indicate whether it's going to be good or not. The network, the writers, the directors, and, of course, the cast. The latter being the most exciting for many (namely: me). Well, prepare yourself guys, because Jennifer Aniston and Reese Witherspoon are going to be starring in a new show called The Morning Show made exclusively by Apple's new streaming service Apple TV+. So how can you watch The Morning Show in the UK? Because, I mean, I need to block out my calendar RN.

Update: Apple TV+ will debut on Nov. 1 2019, and will cost £4.99 a month. However, you can get a year's subscription for free when you purchase any Apple product.

Previously: Well, the show is going to go live on the day Apple TV+ launches. The date of which hasn't been announced yet. However, it is expected to be available this autumn, according to the tech giant. Which will absolutely be available in the UK, thank goodness.

That's right. Just when you thought you didn't need anymore streaming services, Apple announced they are launching Apple TV+. Which will have its own exclusive content.

Apple TV+' content will include the likes of Oprah Winfrey, who is launching two docu-series, as Bustle has previously reported. As well as this, Winfrey is bringing back her much-loved Book Club with Apple TV+. As O: The Oprah Magazine reported back in March, Winfrey said of the club at an Apple event: "Imagine, where Apple stores stream conversations with the author and me live across all devices, all borders, reminding people that, no matter who we are, no matter where we are, every man, every woman, and child looks up in awe at the same sky."

Stephen Spielberg is also getting involved in Apple TV+, directly Amazing Stories, a revival of a sci-fi anthology series he had previously made, for the platform.

But guys, the announcement that has had everyone fan girl-ing is the one about The Morning Show. This series, which is all about the ins and outs of a morning news show, will see Aniston and Witherspoon joined by the legendary Steve Carrel.

Stylist reports that the show is loosely based on the book Top of the Morning by CNN correspondent Brian Stelter. Stelter is adding his weight to the production by working as a consultant on the show.

Stylist also reports that, during an Apple event, Aniston spoke about the show and the revealing nature of its content. Which will give a whole new insight into the news world.

"Through the prism of those under-slept, over-adrenalised people in front of and behind the camera, we take an honest look at the complex relationships between women and men in the workplace, and we engage in the conversation people are a little too afraid to have unless they’re behind closed doors," Aniston said.

The show has been picked up for two seasons already, so Apple must really think they're onto a winner. Which is super great as the female director at the helm, Mimi Leder, says the female gaze is in full force in this production. She spoke to Entertainment Weekly about the show.

"There's so many women voices and it's so interesting and powerful. When things are done through a female gaze, there's certainly a difference in feeling."

I don't know about you, but all of the above sounds very exciting. Let's just hope Apple TV+ launches ASAP.