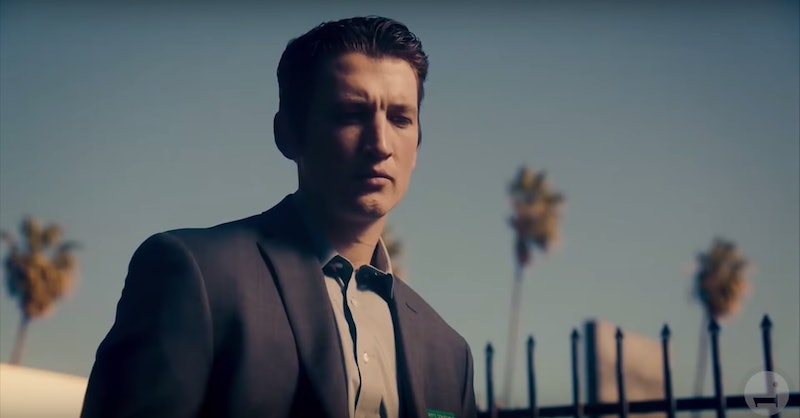 The brand new U.S. crime drama Too Old to Die Young tells the story of a grieving police officer who finds himself immersed in a criminal underworld. The ten-part series was created by Drive director Nicolas Winding Refn, and stars the BAFTA nominated actor Miles Teller, Three Billboards Outside Ebbing, Missouri star John Hawkes, The Hunger Games actor Jena Malone, and many more. The series finally makes its long-awaited debut this week, and here's how to watch Too Old to Die Young in the UK.

According to Variety, the series was produced by Amazon, and those looking forward to the show's debut are in luck, because Too Old to Die Young is now available to watch in the UK. You can catch the new series on Amazon Prime Video, however, the series will only be available for Amazon Prime subscribers.

According to the Guardian, Miles Teller stars as Martin Jones — a Los Angeles based cop who engages with a "cult underground network of mobsters and vampiric demons" after the death of his partner. Throughout the series, Jones then begins to carry out "payback hit" killings alongside his new partner in crime, Viggo (John Hawkes).

As reported by the BBC, the series made its debut at the Cannes Film Festival, however, critics were only treated to episodes four and five. Speaking at the festival, Whiplash star Teller also discussed the format of each episode, and revealed that there was "something really special" about the way in which the series was produced. According to IndieWire, the 32 year-old actor said:

"It felt like each episode was its own independent film. Nic said it would be seven months long, we’d be shooting in chronological order and that this is a 15-hour long movie that has an odyssey for my character. It’s so nice. I haven’t done anything chronological since theatre. There’s something really special about doing that, you are in the moment with your character and you can shift things as you go long."

According to Deadline, the series director previously touched upon the themes which are included throughout Too Old To Die Young — one of which is "female empowerment." When explaining this element of the show, Refn said, "It’s about female empowerment in a world that is enormously dark and male-dominated. The idea of what is going on in the U.S. with men and women…where it’s about the control of female bodies or how women are objectified. There’s a sense of hatred I sensed and it terrified me as I have a wife and daughters."

Too Old To Die Young is now available to watch on Amazon Prime Video.