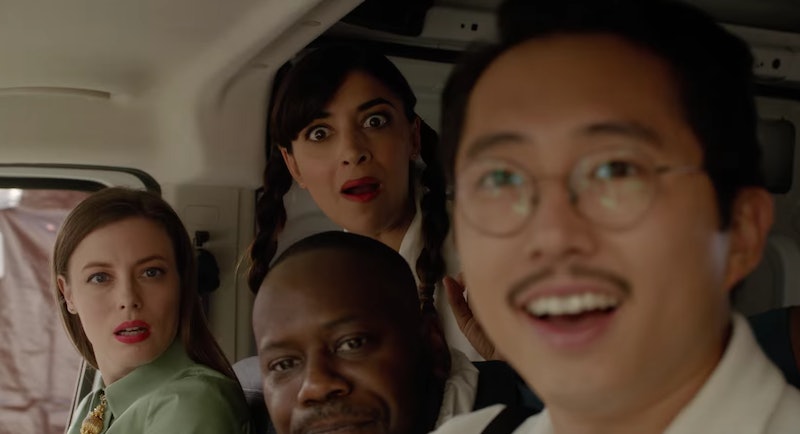 Like many others I can't live without my Netflix subscription, but the internationally beloved streaming service isn't the only one out there. And YouTube's Premium streaming service is officially throwing its hat into the ring after launching its latest series Weird City. And the show has some serious star power, featuring big names such as Awkwafina, Dylan O'Brien, Rosario Dawson, Michael Cera, Laverne Cox and Ed O'Neill. Sound good? Keep reading to find out how to watch Weird City in the UK.

Weird City hits YouTube Premium on February 13, and is accessible to watch in the UK — but it'll cost ya. The streaming service will set you back £11.99 a month (more than Netflix, currently starting at £5.99 a month and peaking at £9.99), but luckily, you can sign up to a free month's trial which would allow you to watch Weird City. YouTube Premium allows members to watch advert-free videos and exclusive original content not available on regular YouTube.

So what exactly is the series about? It's set in the future in a dystopian world called Weird, and is a sci-fi series that comically imagines how the world could look in time.

The satirical anthology portrays a world where the middle class has completely gone, leaving only two polar opposite sections: Above the Line (The Haves), and Below the Line (The Have Nots). If you want to envision what this looks like, just think about the difference between the struggling districts in The Hunger Games and in stark comparison, the luxurious way of living in the Capitol.

As mentioned, each episode features a totally different cast and explores a different topic that pertains to current life, including social media addiction, online dating, and fitness obsessions.

As per The Express, the official synopsis reads:

Excitingly, the series is the brainchild of Get Out Director Jordan Peele, who was also involved in producing Spike Lee's Bafta nominated BlacKkKlansman.

You'll get to see plenty of big names in the show, as every episode follows a new group of people. Only LeVar Burton, who plays scientist Dr Negari, will be in every episode, creating a new invention intended to improve people's lives in different ways. Unfortunately they don't always have the desired impact. Sounds intriguing, right? I know I'm sold.

Alongside Burton, you will spot a bunch of recognisable faces, including The Walking Dead's Steven Yeun, Maze Runner’s Dylan O’Brien, New Girls' Hannah Simone, Star Wars' Mark Hamill, Love's Gillian Jacob, Superbad’s Michael Cera and Crazy Rich Asians star Awkwafina. PHEW that is a serious amount of high-profile talent! This series will be worth a watch for the celeb-spotting opportunities alone.

It sounds like it could be a good one for fans of shows such as Black Mirror and The Walking Dead.

You can watch the trailer for Weird City above, which may just convince you to head over to YouTube and sign up for premiere. See you there.