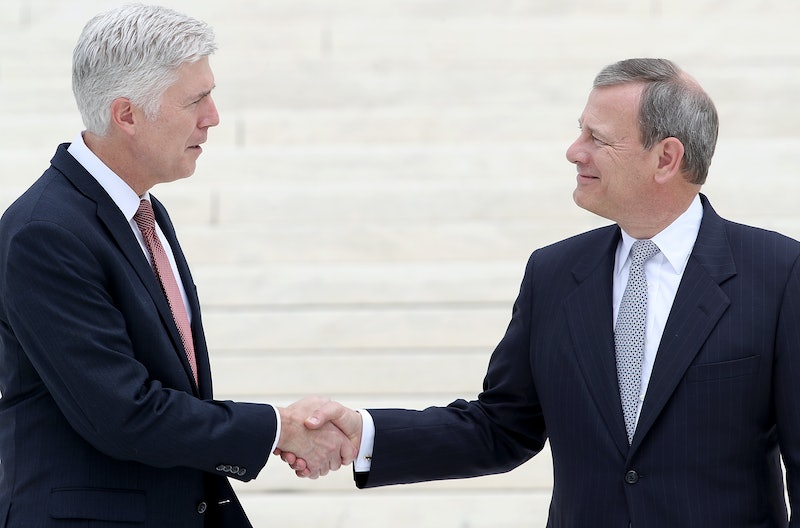 A Supreme Court ruling on Pavan v. Smith last week has raised alarm among progressives about the direction that the court, led by a conservative majority, is heading. Justice Neil Gorsuch, who wrote a harsh dissent in the case that was joined by Justices Samuel Alito and Clarence Thomas, indicates how Trump's pick has shifted the Supreme Court rightward, even as Americans become more supportive of gay rights.

The court had ruled in Pavan v. Smith that gay couples should be afforded the same rights as heterosexual couples with regards to adoption, striking down an Arkansas law banning same-sex parents from having their names on an adopted child's birth certificate.

The ruling was a reaffirmation of Obergefell v. Hodges, the 2015 Supreme Court ruling that legalized same-sex marriage throughout the United States. But while the court confirmed and expanded the rights it guarantees same-sex couples, much of the attention was focused not on the decision itself but on Gorsuch and his fiery dissent.

It's been two years since the court legalized gay marriage, and for most Americans, the issue feels like it's been resolved. Just 12 years after George W. Bush made a constitutional amendment banning same-sex marriage a cornerstone of his reelection campaign, Donald Trump ran in 2016 without discussing the issue much, even reaching out to the LGBTQ community in his speech accepting the Republican nomination.

But Mark Joseph Stern, a legal analyst for Slate who often focuses on LGBT issues, points to Gorsuch's dissent as perhaps reason to believe that marriage equality is not as assured as most Americans believe. He argues that Gorsuch's dissent shows he's still resolutely against the ruling in Obergefell, and does not see equal protection of same-sex couples as enshrined in the law. With retirement rumors surrounding Anthony Kennedy, the justice who provided the crucial swing vote in the 2015 case and wrote the majority opinion, it seems perfectly likely that Trump would replace him with a judge in the vein of Neil Gorsuch. And if he did, we could see the court ruling against marriage rights to gay couples in cases like Pavan, or perhaps even going back on Obergefell completely.

This would be a strange thing to have happen to American politics, as support for same-sex marriage in America has gone steadily up in recent years. According to the Pew Research Center, 62 percent of Americans support it, including even 40 percent of Republicans.

So while the American people are moving steadily and clearly in one direction, Trump is nevertheless moving the Supreme Court in the other direction. Despite an election where more Americans voted against him, Donald Trump, in appointing Neil Gorsuch, set up the branch of the American government that moves slowest to hold his legacy for decades. And if he appoints someone similarly conservative to replace Justice Kennedy, he could do it again.

Similarly, it's not hard to imagine a Supreme Court, filled with two or more Trump nominees, that significantly cuts back on abortion rights, even though a healthy majority of Americans consistently say abortion should be legal, at least in some cases. Justice Kennedy was the swing vote in multiple major abortion cases, reaffirming Roe v. Wade's right to an abortion and preventing certain onerous restrictions.

Liberal legal analysts worry about how much the court could roll back abortion access with someone less supportive of abortion rights than Kennedy. With several recent cases related to Obamacare that have come up to the Supreme Court, it's clear that many major aspects of American public policy could be affected by a court like this.

The Supreme Court is often the slowest-moving branch of American government, with its lifetime appointments, insulation from electoral politics, and deliberative decision-making process. But, as Gorsuch's Pavan dissent shows, the court is moving farther and farther away from the desires of Americans. And since Gorsuch will be on the court for decades, it's a bottleneck that could keep American policy conservative even if the future moves to the left.