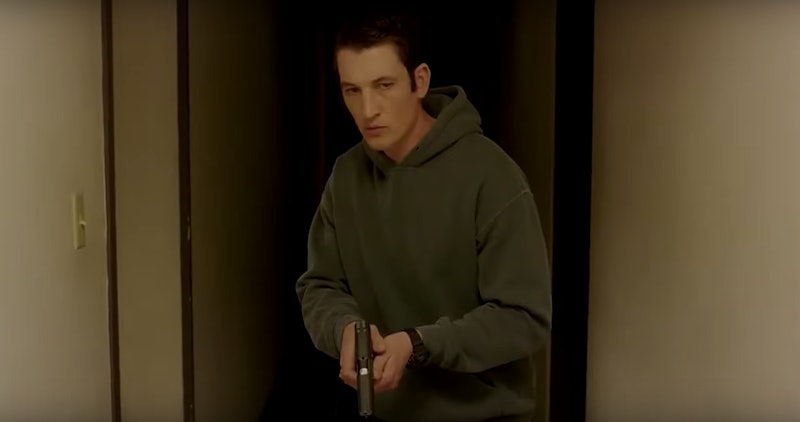 Light spoilers ahead for Amazon's Too Old To Die Young. Anyone familiar with the work of Nicolas Winding Refn won't be surprised to know that his new Amazon series, Too Old To Die Young, is just as violent and gory as his past films. The show moves at a glacial pace, with characters pontificating on the nature of humanity and existence. But in Refn's projects, silence exists almost solely to be interrupted by death and bloodshed, and Too Old To Die Young is no different.

Refn's breakthrough, the 2011 film Drive, is remembered for its neon aesthetic, its sleek, synthesized soundtrack, and Ryan Gosling's mesmerizing performance as its unnamed lead character — but it also featured a great deal of blood and brutality. Since then, violence (in addition to all those neon lights) has become somewhat of a cornerstone in Refn's work. His follow-up movies — 2013's Only God Forgives, also starring Gosling, and 2016's Elle Fanning-led Neon Demon — feature similarly graphic content, and Too Old to Die Young continues the trend.

Across 10 90-minute episodes, the crime drama follows Martin (Miles Teller), a cop who, distraught over his partner's untimely death, becomes a killer and teams up with "moral" assassin Viggo (John Hawkes). Together, they track down and murder anyone they believe to be morally unjust. Much of the show's violence is enacted by them as they stab and shoot their way through some of the worst criminal circles in the world. However, in order to prove that the people Martin and Viggo are killing are morally suited for this punishment, the show must first establish that these bad men are truly evil. Too Old To Die Young accomplishes this by describing them as people who sexually assault women — which sadly reverts to a tired and lazy trend in TV and film.

While the violence in Too Old to Die Young is directed at both men and women, almost all of the women in the show exist solely as vessels for pain — they've either been hurt, are being hurt, or are at risk of being hurt. At one point Martin explains that he shot a woman and felt "nothing," which places him at only a slightly higher moral standing than the men he's killing, as they assault and kill women for pleasure. Unfortunately, this is nothing new: TV shows and movies, particularly when it comes to women, often rely on assault and violence as a plot device without bothering to further develop the characters it's being inflicted upon.

If you don't mind a lot of blood and gore, you may find a small bit of vindication in seeing rapists die gruesome deaths or debtors get their fingers sliced off with a katana. However, if you don't have a strong stomach or aren't interested in seeing women being hurt and killed, then you should steer clear of Too Old To Die Young. There may be shows that are just as violent, but the way that the Amazon series presents that violence feels largely gratuitous and disappointing. Watch at your own risk.

More like this
The ‘Emily In Paris’ Season 3 Release Date Is Here, Plus The First Footage
By Bustle Staff
The ‘You’ Season 4 First Look Shows Joe’s New Identity And Potential Victims
By Bustle Editors
New ‘Lupin’ Part 3 Teaser Hints That Assane Will “Go Out In Style”
By Brad Witter
Devi Is Going To Meet A “Smoldering Bad Boy” In ‘Never Have I Ever’ Season 4
By Jack Irvin and Gabrielle Bondi
Get Even More From Bustle — Sign Up For The Newsletter