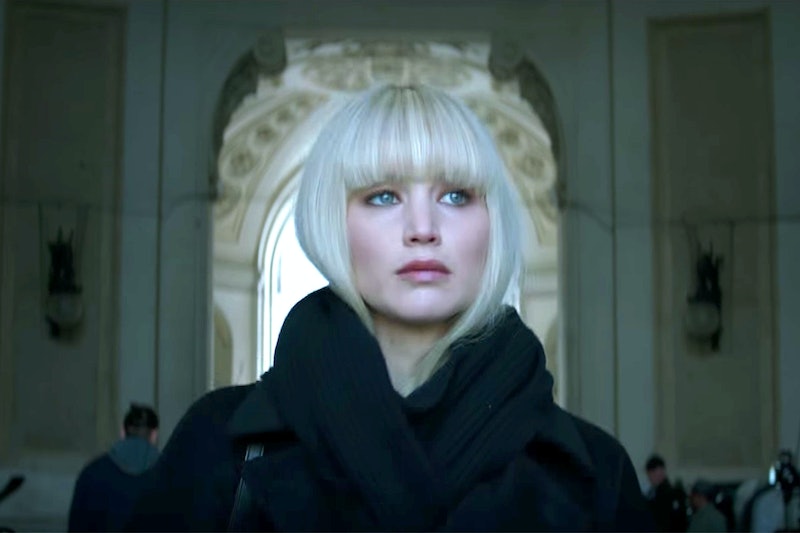 In several recent interviews for Red Sparrow, Jennifer Lawrence has defended her new film's several, controversially graphic nude scenes. "I showed up for the first day and I did it and I felt empowered,” she told 60 Minutes. To Vanity Fair, meanwhile, Lawrence said that the scenes were her "choice," and that doing them "felt normal." It's a shame that the actor has felt the need to justify her nudity, since no actor should be shamed for deciding to appear naked on-screen. But what's frustrating about Lawrence's defenses, and the movie itself, is that they seem to be missing the point. Red Sparrow is not problematic for its lead actor being frequently naked — it's problematic that the scenes she's naked in are nearly all about sexual assault.

In many ways, Red Sparrow (producer: Jenno Topping) is your fairly traditional spy movie. Directed by Francis Lawrence, the film, out March 2, follows a Russian ballerina (Lawrence) who, after being badly injured, is forced to turn to a life of espionage. She completes missions under the watchful eye of dangerous Russian agents, but soon, Dominika encounters a CIA agent (Joel Edgerton) who encourages her to work for America. There are twists and turns, great outfits and bad accents, and enough gruesome torture scenes to make even the toughest viewers avert their eyes. And, like many spy movies, there are plenty of scenes featuring the female lead's naked body, with seduction and sexuality being used by her as tactics to gain the upper hand.

Spoilers for Red Sparrow ahead. This trope is tiring, to be certain — can't on-screen women use their actual skills to trap a target, rather than their bodies? But that's not the most disturbing part of Red Sparrow. It's the fact that the movie goes one step further, relying on rape and other forms of sexual assault and harassment to showcase Dominika's initial weakness, and, later, her growing, expertly honed power. Early on in the film, when Dominika is on her first spy mission, she's raped by her target. Someone pulls the man off, but not before, as Dominika tells her superior later, he penetrates her. She's obviously distressed by the incident, but her male bosses shrug her pain off, and eventually, she seems to follow suit.

If this was the only scene of assault in the film, it'd be easier to excuse; certainly Dominika didn't need to be raped for the plot, but perhaps the instance was meant to symbolize the darkness of the spy world or her vulnerability as a young woman. But that initial rape is far from the only time assault occurs in Red Sparrow. Soon after the assault, Dominika is sent to spy school, or, as she later aptly names it, "whore school." While there, a terrifying headmistress (Charlotte Rampling) teaches Dominika and other "students" to be spies — which apparently includes raping, and being raped by, each other.

In one scene, Dominika is assaulted by a male classmate while in the shower, and fights back before he can rape her; as punishment, she's told to let him go through with the act in front of her peers, and she nearly does, stripping completely naked. In another scene, a female student is ordered to perform oral sex on a male prisoner, again in the presence of all the other trainees. More than once, the class watches each other's sex acts — both consensual and not — on film, analyzing the situations as a form of "education."

According to both the headmistress and the men in charge of the program, this horrific training is essential in order for spies to be able to expertly seduce and manipulate while in the field. And it's true that there's some basis in reality for this idea, as "Red Sparrows" did exist in Russia for a time. But that doesn't excuse just how unnecessarily frequent rape is depicted in the film, or how wrongly female sexuality is understood by the movie and its makers.

In Red Sparrow, a woman's power seems to come from her ability to withstand sexual abuse and come out the other side. When Dominika emerges from "whore school," she's strong, capable, and ready to fight — by which, it becomes clear, means ready to seduce. Being frequently raped has hardened her, it seems, but not so much that she's able to use her feminine wiles to manipulate men into telling her their secrets. She's the perfect spy, luring her targets in with cleavage and high stilettos until it's time to put her other skills to use.

And the worst part is, Red Sparrow seems to indicate that this is feminist. The movie's central message appears to be that rape and assault are awful, yes, but, hey, if they lead to you being able to kick serious ass, then what's the harm? This is, of course, a dangerously misguided belief, especially considering the current climate regarding sexual assault and harassment. When real women everywhere are bravely speaking up about their experiences and the world is treating rape with the seriousness it warrants, the last thing we need is a movie in which sexual assault is viewed as essential character development. We've already seen, and critiqued, that exact message in shows like Game of Thrones and The Americans. We don't need it again.

In today's world, Red Sparrow simply has no place. But it does exist, and it's upsetting to think that some viewers might see this movie and take away its dangerous, unhealthy message. Trauma is not and should not be necessary to breed strength, no matter what this movie wants us to believe.