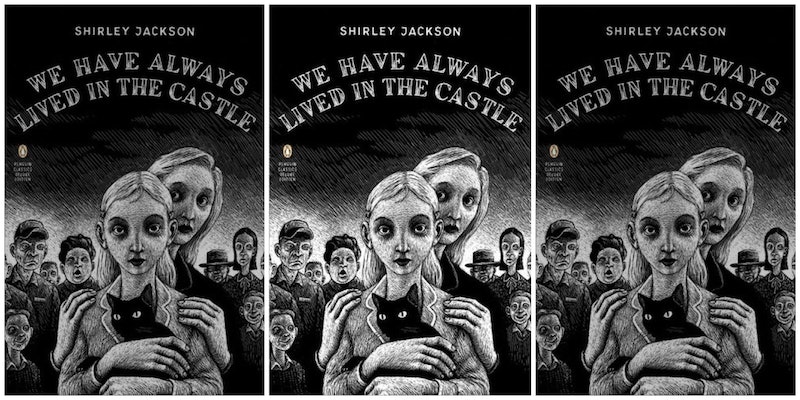 I have a problem with most horror movies and novels, and my problem is this: I am very easy to scare.

Any sudden movement or loud noise will make me jump, even if I know a jump scare is coming. Friends turning the corner too quickly, or my cat leaping at me with no warning, can caused me to shriek in alarm. A stranger at a bar once pitched me his screenplay about how demons caused the Titanic to sink, and I awoke that night in a cold sweat with waking nightmares about ocean demons seeping in through the ceiling.

Something in my genetic code or deep childhood subconscious has wired me for constant vigilance. That, or my grasp on reality is so tenuous that it takes very little to make me believe that a long-toothed clown is crouched under my bed at any given moment. And so, for a long time, I didn't think that I liked horror.

I didn't like the Goosebumps books or Courage the Cowardly Dog. Spooky campfire stories gave me heart palpitations. I did read Neil Gaiman's Coraline as a kid, and I liked the fantasy adventure of it, but I found the Other Mother so exquisitely terrifying that I had to sleep with my head under the covers for a month to stop her from coming into my room and replacing my eyes with black, shiny buttons.

I was easily scared, and I didn't like being scared.

And then I met Merricat Blackwood.

We Have Always Lived in the Castle by Shirley Jackson, $11, Amazon

Here is how Shirley Jackson's We Have Always Lived in the Castle begins:

“My name is Mary Katherine Blackwood. I am eighteen years old, and I live with my sister Constance. I have often thought that with any luck at all, I could have been born a werewolf, because the two middle fingers on both my hands are the same length, but I have had to be content with what I had. I dislike washing myself, and dogs, and noise. I like my sister Constance, and Richard Plantagenet, and Amanita phalloides, the death-cup mushroom. Everyone else in our family is dead.”

I can't remember where I picked up my copy of We Have Always Lived in the Castle, but the inner cover alleges that it belongs to one Paige Johnston, English 9H, and that the above Paige loves someone named Megan (Paige, if you're out there, I hope that Megan loves you too).

I can only assume that I bought the book secondhand, and that I didn't fully understand who Shirley Jackson was at the time. If I had known that Shirley Jackson was the undisputed Queen of Horror, I surely would have flung the book away and run screaming in the other direction.

But instead, I found myself creeped out by our narrator, Mary Katherine... and yet still intrigued. "Merricat" Blackwood, as she's called, comes across as off somehow. She's too childish to be an 18-year-old, but she doesn't quite sound like a child, either. She's hated by the other people who live in her town, and fiercely protective of her older sister. She likes to pretend that she lives on the moon. She makes offerings of jewelry when she's had a good day.

I had to know what she was up to, in that old Blackwood house.

Jackson's writing was almost hypnotic. It was creepy, yes, but Merricat's voice was so strange and matter-of-fact that I couldn't bring myself to put the book down. And the tension built so slowly that by the time I was fully freaked out, I was far too invested in the story to hide under the covers.

(At least, I was seeing the story through her eyes—I'm not actually such a fan of murder or deadly mushrooms or creepy poems about the moon.):

“On the moon we have everything. Lettuce, and pumpkin pie and Amanita phalloides. We have cat-furred plants and horses dancing with their wings. All the locks are solid and tight, and there are no ghosts.”

Merricat and Constance live in a mansion with their strange uncle Julian. Everyone in town believes that Constance murdered the rest of their family years ago, but Merricat loves her sister all the same. For the most part, they are left alone. And then, naturally, a cousin named Charles appears to upset the balance of their quiet lives.

I won't spoil what happens, as Merricat grows increasingly upset by Charles' presence. But suffice it to say, the tense, off-kilter atmosphere does ramp up into full on horror at a certain point. And I did get stomach-clenchingly, spine-tinglingly scared.

But. I don't know if I was simply older and more capable of managing my own existential fear, or if Shirley Jackson's slow-burn horror gave me time to adjust, or if Merricat's personal brand of creep was just up my alley... but this time, I was into it.

I very nearly enjoyed being scared.

More than that, I enjoyed the way that Jackson could quietly, deftly, weave horror in and out of ordinary things, like sisters and sugar bowls and feathers. For the first time, I saw horror writing as a remarkable skill: the ability to frighten with mere words on the page, without jump scares or latex masks or bleeding elevators. It was electrifying. I finally saw horror writing for the subtle art that it is. And I never looked back.

To be quite honest, I'm still not much of a horror movie junkie. I won't watch my friends play any video games in which they are attacked by zombie nurses of any kind. And no one should attend a novelty haunted house with me in October, unless they would like me to accidentally wrench their arm clean out of its socket.

Once I fell in love with Shirley Jackson, though... I started to like reading horror. I found that I wanted to read Stephen King, and that I liked swapping ghost stories, and that I could actually make it through the immersive theatre piece Sleep No More without breaking down in tears (even though they separate you from your friends and the first scene of it takes place in an abandoned insane asylum).

So I'm still very easy to frighten, as anyone who's ever popped a balloon in my presence can confirm. But thanks to Merricat and the quiet, drawn out horror of the Queen herself, I can now enjoy a good scare.