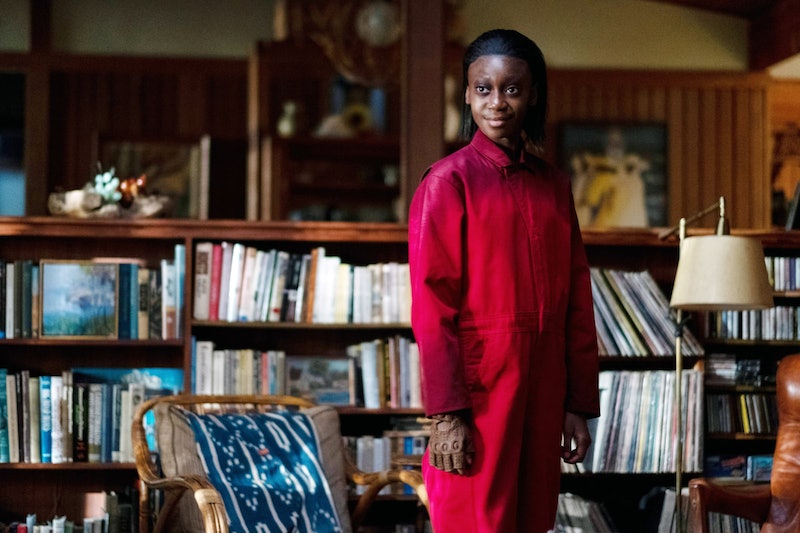 A central question in most horror films tends to be "Why?" Why us? Why now? Why is this happening? The answer is usually provided during the climax, about two-thirds of the way through the film when audiences have had to suspend enough disbelief to know that there will eventually be some justification to the violence. Oftentimes it's some kind of revenge enacted by the killer who has been made to feel isolated, cast out, or justifiably rageful, and there's a connection to those being attacked. They are distant family members, or unruly teens punished for their sins (such as drinking alcohol and having sex), or someone who stumbled into the wrong part of town or property. Sometimes, like in the home invasion movie The Strangers, the answer is simply, "Because you were home." But in Jordan Peele's new horror film, there are even more questions because the murderers are not simply masked strangers, but exact replicas of the people they are coming for. One of those questions is inevitably how were the Tethered made in Us? Major spoilers ahead.

The need for logic and logistics lingers long after seeing Us. When you are coming after you, the question of "why?" seems all the more pertinent. The Tethered version of Lupita Nyong'o's Adelaide (referred to as Red) answers the Wilsons' question about who they are by saying, "We are Americans." Later, Red shares that she's led a group of government-created soulless carbon copies of human beings in an uprising, though, and the question changes. It's no longer why, but how?

All we know for sure, based on what is explained both in the film by Nyong'o's character and by Peele in interviews, is that the Tethered began as an experiment. The United States government thought creating clones would allow for the control of human beings, but because the Tethered lacked the souls of their human counterparts, they were not able to fully inhabit their wants, needs, or actions. The Tethered are versions of ourselves that aren't shown love or conditioned to speak; any sentiments they have to share are expressed through grunts, and they are doomed to exist as shadows of their human selves — mimics who cannot experience emotions. Except for Red, who we find out at the end of the film is actually the real Adelaide, switched during the opening of the film in the funhouse. It was this human version of Adelaide who, forced to live with the Tethered, led them in an uprising, instructing them to take over for their normal American human copy by killing them and then coming together in a terrifying restaging of Hands Across America, the 1986 human chain charity event that is highlighted in a commercial shown at the beginning of Us, and is also on the t-shirt Adelaide is wearing when she enters the fun house.

Once on board with this idea, though, there are inevitably more questions, like how did were the Tethered meeting and finding the same partners as their above-ground versions? And did they procreate to produce the same children? Do they all have the same exact experiences underground? How? Copying some choreography is one thing; childbirth is another. And they must not be able to travel, unless they are able to follow along in the tunnels underground. Should every single American truly have a Tether, that's a lot of foot traffic!

But there's also the puzzle of how the Tethered stopped copying their counterparts altogether, choosing to listen to Red who, after years underground, inspired their resistance. The only one who continued following his human version was Pluto (Jason's double). Some fans theorize this is because Jason is half-Tether from his mom's switcheroo, but that would mean his sister is also half-Tether and her double was taking orders from Red.

Red tells Adelaide that the Tethered survive by eating rabbits, animals who frequently mate and reproduce. So that seems logical enough for their continuing to make enough food to sustain themselves underground. But how did the Tethered get their scissors? Their fashionable red jumpsuits? There are certainly many implausibilities to remind you that this is a horror film. And often in Us, that means allowing for some of the creepier elements to exist without explanation, especially if they result from movie magic utilized to up the scare factor. Would the Tethered be as scary if they weren't as uniform, like trained killers prepared for blood to stain their blood red outfits?

Us is full of metaphors but even more loose ends, and that is what Jordan Peele intended. In interviews, he's shared tidbits and pointed out easter eggs that indicate the symbolic dualities in the film: The symmetry of scissors and bunny ears that easily mirror having a double. The idea of being your own worst enemy, or that you could easily be living an alternate life that is less fulfilling, less happy, insufferable. That you could have your life dictated for you by someone else whose humanity could be easily called into question should they know of your oppressed existence. Peele has spoken about the idea of Americans and otherness and oppression, and how Us speaks to our want to separate ourselves from the responsibility we have as Americans; as humans. All of these ideas are visible in Us, but the full history and explanation of how the Tethered were created and continued to exist is left for you to ponder.

"I have a pretty elaborate mythology and history of what's going on in this film. And of course, the dilemma that comes up is how much of that do you tell?" Peele told The Hollywood Reporter. "When there are questions left, and you know there is more to the story, your imagination is left to run wild."

We seek answers to make us feel safe; logic to calm our fears and concerns. If we know why something is happening, we believe we can avoid it or explain it away. If we know who or where or when or how, we believe we can outsmart anyone or anything, even ourselves. But maybe the most horrifying thing about Us is that, just like in real life, not everything is so easily explained. There are unsolved mysteries, cold cases, and ghost stories that defy logic, just like the most curious elements of Us. There is evil in this world — in this country — that exists even beyond our comprehension, and it's possible that even the tiniest bit of it exists somewhere within us, knowingly or unknowingly. We could be contributing to the heinous right now, hurting ourselves and other people without any conscious intention. That concept is truly terrifying to some people. But, as the end of Us suggests, it isn't to others. And that's what should really scare us.