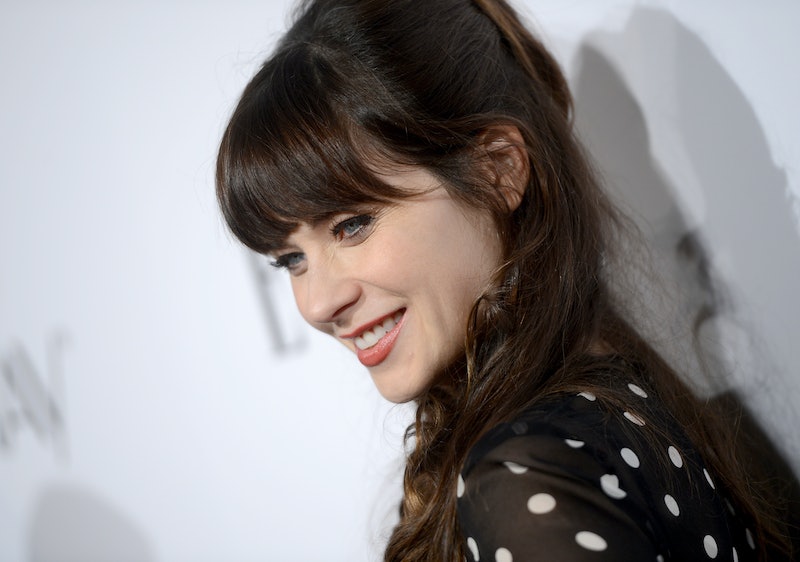 For seven years, Zooey Deschanel played New Girl’s bubbly Jessica Day, a character who, after moving to Los Angeles, didn’t seem to travel much except back and forth from her loft apartment to her school. And while Deschanel may have lived in LA, too, her experiences with travel are worlds away from her character’s. Due to frequent travels with her family while she was growing up, Deschanel has a special love for traveling — and, as she tells Bustle, traveling with the mentality of "purposeful travel" is something that has greatly influenced her personal and professional life. "I was traveling all the time with my parents and I don't think I appreciated how much character it builds to be able to see other cultures and expose yourself to other ways of doing things," she tells Bustle over the phone. "But now I really give those trips a lot of credit for making me the person that I am. It really allows you to go back to your own life and appreciate things and be grateful for what you have."

"Purposeful travel," she shares, is basically the idea of traveling with a specific purpose in mind. It sounds obvious, but it's not actually something everyone does when they're planning their next trip — especially in 2019, when traveling for the social media clicks is more popular than ever. To adhere to the "purposeful travel" philosophy is simple, though: All one has to do is seek out travel experiences that inspire them in some way.

The concept came about in 2018, when Deschanel partnered with Capital One for their Purpose Project. The Purpose Project was created to encourage others to seek personal discovery through travel and giving back to the communities they visit. "One of the things that most [interested me about it] is just that they're encouraging people to travel and do things that helps them be more inspired in their own lives," Deschanel tells Bustle.

Purposeful travel, she says, might look different for everyone — but as long as the bottom line is that you're traveling to be inspired in your own life back home, you're benefitting from it greatly. For Deschanel, she's most inspired by experiencing local, everyday life wherever she travels, whether it's a place she's never been to or somewhere she's been a million times.

"I’d rather go to a place and try to be like a local for a week," she says. "I don't necessarily have to see all the tourist attractions. I might want to see one or two, but for me the most important thing is eating in restaurants that the locals like to eat in." She also emphasizes the enjoyment she finds in traveling without a set plan. "I just find that you sometimes you wander around and you find nothing, but you still get the lay of the land to take in." And to her, just being able to do that in a new place can teach her so much about other cultures and herself, too. So much so, that it's become something she seeks out more often than not. "Taking a trip is kind of like scratching an itch in some way."

You don't have to travel to benefit from the philosophy of "purposeful travel," however — it's something you can do right in your own city, even if you've lived there for years. "One of the things that I feel is ignored a little bit when we talk about travel is that discovering your own city can also be included in that," she explains. "I'm from LA and I feel like there are so many parts the city that I have no clue about and probably haven't explored. But it's not really something that you think about whenever you live in a place."

Putting the philosophy of "purposeful travel" into effect might look different to you than it does to Deschanel, but that's the beauty of the concept: Everyone finds different meanings and inspirations through experiencing new places and things. "The shift in perspective," Deschanel shares, "is absolutely magical."

More like this
Expert-Approved Hacks For Packing A Carry On
By Jessica Goodman
Kim Kardashian Is Releasing A Line Of Earbuds With Beats
By Alexis Morillo
Where Was 'The Bachelorette' Season 19 Filmed? More European Destinations Are On The Way
By Radhika Menon
I Tried Float Therapy In Iceland's Blue Lagoon — Here's My Honest Review
By Alexandra Owens
Get Even More From Bustle — Sign Up For The Newsletter