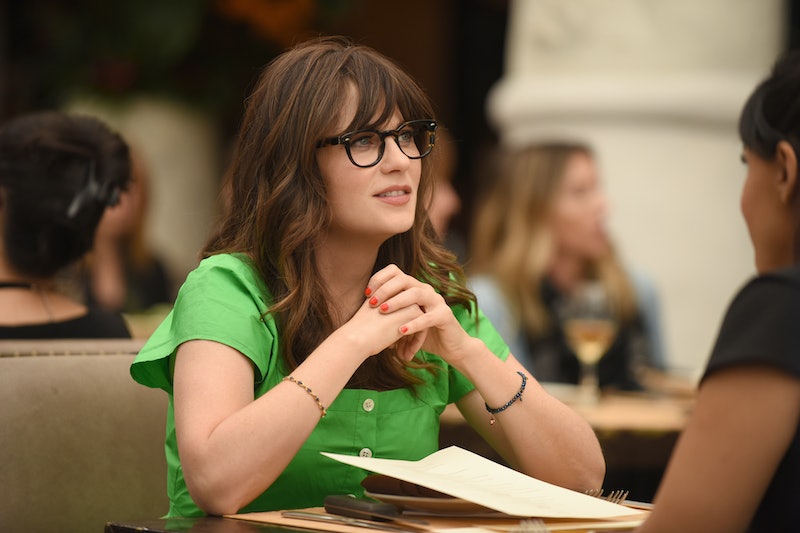 In the seven years since New Girl premiered, Jess (Zooey Deschanel) has come a long way from her "adorkable" roots. The quirky, handbells-loving teacher from Portland has created a new life for herself with her chosen family in the loft. She's grown up, found and lost love, only to find it again with Nick (Jake Johnson), and has become less and less of the cute caricature she was introduced as in the series premiere. But for some reason, Deschanel still sees her New Girl character being labeled as a Manic Pixie Dream Girl, both by critics and by the show's marketing. And she doesn't think that's an accurate description of who Jess started off as and who she's become.

Speaking with Bustle ahead of New Girl's final season premiere, Deschanel says that Jess is more three-dimensional than that limited term would ever allow her to be. "I don’t think she was a Manic Pixie Dream Girl," she says. "I also think that's such a nebulous term. I think that term usually refers to somebody who's the object in a story, not the subject, not the protagonist. Jess is the protagonist in this."

She's right. While the idea of a one-dimensional female character whose only function is to be the object of a male hero's affection has been around since the dawn of entertainment, the mid-aughts saw a new take on this archetype in the form of the Manic Pixie Dream Girl. The term, coined in 2005 by film critic Nathan Rabin after watching Kirsten Dunst in Elizabethtown, describes the kind of woman who "exists solely in the fevered imaginations of sensitive writer-directors to teach broodingly soulful young men to embrace life and its infinite mysteries and adventures." Though that review also mentions Natalie Portman's role in Garden State as another example of this type of character, Deschanel's 2009 film (500) Days of Summer led Rabin to call her "the ultimate Manic Pixie Dream Girl."

Deschanel laughs as she reminisces about being labeled as such in that film. "I really have no response to [why] that [happens]," she says. But at least when it comes to New Girl, she "would not characterize Jess as that at all."

"Normally, Manic Pixie Dream Girls are at least, as far as I can tell, given a series of attributes and then admired in some way by a male protagonist that idealizes this person," Deschanel says. "Jess is not that at all. I would never use that term [to describe Jess], but people always seem to want to put it on any character I do no matter how different they are."

As for that enduring (and somewhat annoying) label of "adorkable" that Jess and New Girl as a whole were never able to fully shake, Deschanel reveals she had no control over that now-infamous marketing campaign. "It's funny but these are huge machines that put out these shows and I had absolutely no control over it," she says. "Our head of marketing did that campaign, and he doesn't work at FOX anymore but he is a genius, an amazing creative person. I don't have a degree in marketing and I'm sure they tested a bunch of taglines, but obviously people remember it."

She laughs, then adds, "So it resonated, even if it sticks in a way that may have characterized the show or misled people about the show later. I definitely think it was a really innovative marketing campaign."

But even though people couldn't get that "adorkable" tagline out of their heads, Deschanel says it stopped applying to her character years ago. "I think that was just to draw people in; it was a way to describe the character in the first few episodes, really," she says.

She doesn't think that term has any connection to the series now, either. "I wouldn't use that for any other time other than the first few episodes of the first season, which was a really good marketing campaign for the first season," the actor says. "But it doesn't apply now. I wouldn't say it applied to any other season and they haven't used it again."

With a large chunk of New Girl's shortened final season focusing on Jess' career goals and plans for her future both romantic and otherwise, Deschanel will use these last eight episodes to put any adorkable or Manic Pixie Dream Girl comparisons to rest. Who's that girl? It's just Jess.