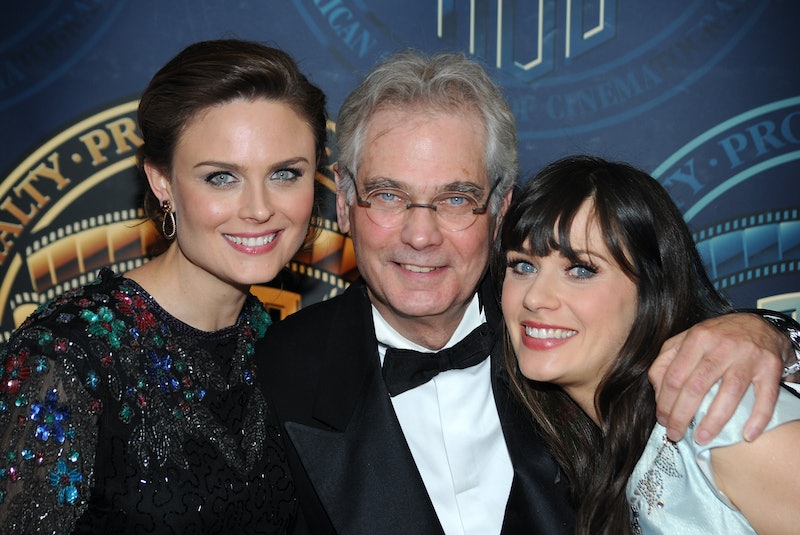 It turns out that Zooey and Emily aren't the only famous faces in the the Deschanel family. Their father, Caleb Deschanel, is up for an award in the Best Cinematography category at the 2019 Oscars for his work on the German film Never Look Away, and Zooey supported her dad's Oscar nomination with the sweetest message of support. Alongside an Instagram photo of herself and sister Emily in the car on their way to the ceremony, the New Girl star wrote, "Sister Emily and I on our way to the Oscars! Getting ready to root for our dad!"

For those that don't know, Caleb is a well-known director and cinematographer who has worked on films like The Passion of the Christ and the upcoming live-action adaptation of The Lion King. In the weeks leading up to the Oscars, Zooey advocated for the Academy to reverse their decision to air several categories —including Best Cinematography — during commercial breaks.

"Can't believe @theacademy isn't airing the categories for the most important jobs in film. Try making a film without a cinematographer or editor! ... Film is a collaborative art," she wrote alongside a sweet throwback photo of herself on a film set with her dad as a small child. "Pic is me at 4yo with my cinematographer dad. He's the best and taught me so much about filmmaking." (The Academy later announced that they will air all of the competitive categories during the ceremony.)

When the 2019 Oscar nominations were announced back in January, Zooey also shared a photo of her father at work behind the camera, along with a caption celebrating his impressive career. "So proud of my Dad, Caleb Deschanel, who received his 6th Oscar nomination this year for Never Look Away. He never ceases to amaze and inspire me! #prouddaughter," she wrote on Instagram.

Other than her gushing social media posts about Caleb's impressive achievements, Zooey hasn't spoken much about her family in interviews. However, in a 2006 conversation with New York magazine, she revealed that she "comes from a creative family," and explained that even though her parents were in the industry — her mother, Mary Jo Deschanel, has appeared in films like The Patriot — they were hesitant about her pursuing acting as a career.

"I wanted to be a child actor so bad that every day I’d beg my parents if I could audition, but my mom said, 'Not until you can drive yourself to auditions,'" Zooey recalled at the time. "So I had to wait until I was 16, but it was good, because then I went after it myself."

Regardless of whether or not Caleb takes home an Oscar for Best Cinematography, the 2019 Oscars ceremony still has the potential to be a night to remember for Zooey and New Girl fans everywhere. Jake Johnson, who voiced Peter B. Parker in the Oscar nominated Spider-Man: Into the Spider-Verse is also attending this year's ceremony, which has sent fans of New Girl couple Nick (Johnson) and Jess (Zooey) into a frenzy hoping for reunion pictures.

In other words: No matter what happens on Oscar night, it seems as if at least one Deschanel will walk away a winner.