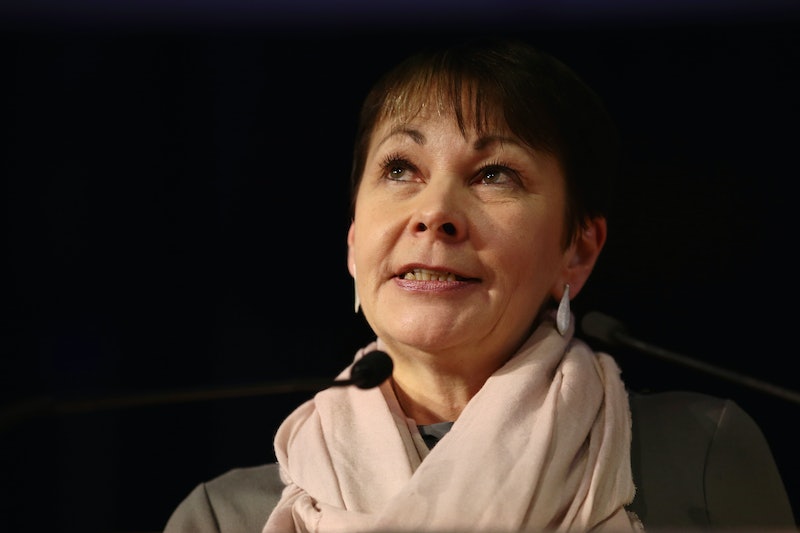 As the UK approaches the dreaded Brexit date, some MPs are doing everything they can to oppose a no deal scenario. But Green MP Caroline Lucas' all-female cabinet proposal is one of the more controversial strategies. Of course, it has been condemned by those who simply don't support gender equality. But some criticism has come from women themselves — and rightly so in my opinion.

In a letter published in the Guardian, Lucas reached out to 10 female MPs belonging to all the main political parties. She offered them the chance to form a temporary all-female cabinet that would fight a no deal Brexit and "find a way forward that allows the British people to decide which course they want to take."

"Why women?" she wrote. "Because I believe women have shown they can bring a different perspective to crises, are able to reach out to those they disagree with, and cooperate to find solutions." Lucas went on to explain that it was two women who began a peaceful movement during Northern Ireland's Troubles and two women "who were key to the signing of the Paris climate agreement."

The response was mixed, reports the Guardian. MP Anna Soubry agreed that politicians "need to put their differences aside and work together to stop a no deal Brexit" and that "women can do things in a different way," but added, "The key thing is to bring people together, not to divide them on the basis of their gender."

Fellow MP Heidi Allen, however, said, "Women are by nature less tribal, so I'm very willing to play my part and try."

As a committed feminist, the thought of women running the country filled me with joy. At first. But when I took a closer look at the list of MPs who received Lucas' letter and thought a little harder about the ramifications of her proposal, I quickly changed my mind.

As of July 2018, only 32 percent of MPs were women. Parliament's gender equality figures are at an all-time high, but they're still not good enough. With women making up slightly more than half of the current population, a 50/50 split is clearly necessary.

But Lucas' plans are effectively going from one extreme to another. Women have been shut out of world-changing conversations for centuries, it's true, but retaliating with the same behaviour will not progress the feminist cause. It will only serve to strengthen the divide. To put it plainly, the remedy to female exclusion is not male exclusion. There's even proof. According to Boston Consulting Group data, 96% of organisations that include men in gender equality initiatives see progress, compared to 30% that exclude.

Encouraging men to positively join the conversation doesn't mean removing safe spaces for women or letting a male agenda dictate women's needs. It simply means giving men the chance to listen, so that they too can advocate for women in their personal and professional lives. That will never be easy — by default, humans tend to heavily support their mirror image — but people must try.

That brings me to another issue with Lucas' proposal. Every single one of her recipients is a white woman. According to her, they "simply represent the nations of the UK and the leadership of the relevant political parties." If that's so, as several Twitter users asked, why had politicians of colour, who were more senior than some recipients, been left out?

It's not impossible for people to advocate for identities other than their own. But is a relatively privileged white woman the best person to represent women of colour or the working class — two of the groups that could be hit hardest by Brexit? As a white woman, I can safely say the answer is no.

Lucas' idea could have been met with a warmer response had she stopped to think about diversity. (She later admitted, via Twitter, that it "needs to be opened out further" and that she'd love for the likes of Shadow Home Secretary Diane Abbott to be involved.) Instead, she replicated the actions of some of her male colleagues who "forget" about women each and every day, reinforcing the idea that feminism is only for the privileged.

Lucas believes women can solve the Brexit conundrum. No one can definitively say they can't. She doesn't think "a small group... should be deciding on Britain's future" and instead wants to "revitalise our democracy."

But her proposed team, however temporary, in no way reflects the people living in the UK today. It ostracises, rather than unites. It fails to dent the structures that have systematically oppressed people from reaching their potential. It, like many of us, needs to do better.