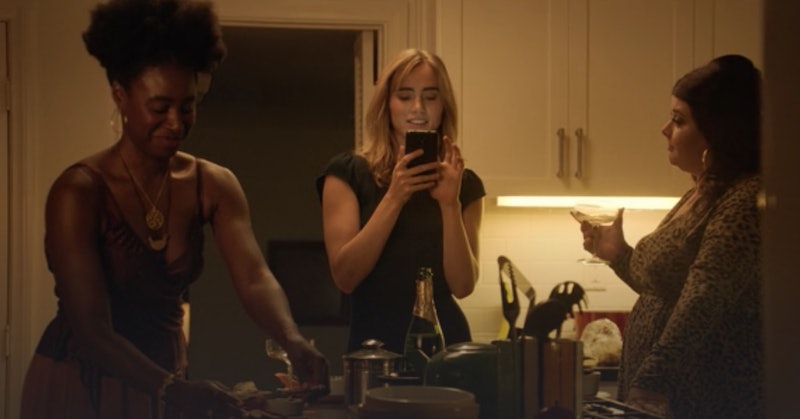 The latest entry in Hulu's holiday horror anthology Into The Dark, New Year, New You, takes place on a rainy New Year's Eve as four old friends gather at one of their childhood homes to ring in the year. Three have kept in touch and still live nearby, two resent where their lives are currently, and one rocketed to stardom as a major social media wellness influencer, leaving the others behind. What seems like a simple, if awkward, reunion soon takes a darker turn, as jealousies and secrets bubble up with the champagne and the clock nears midnight. With her Blumhouse debut, director Sophia Takal explores the darker side of so-called self care, as she examines how social media can make monsters of us all. Minor spoilers ahead.

In the film, Takal takes the focus on female resentment and jealousy from her previous films and add in a toxic amplifier: Social media's ability to algorithmically expand those same feelings to a point of insanity.

"I like the concept of doing a holiday horror movie, and I thought the concept behind the story that they gave me was me was great," Takal explains. "The script that I got, it did have social media in it but it didn’t have the 'self love, self care' help and wellness element in it, that’s something that I added in."

Previously working on small indie films such as Green and Always Shine starring herself, her husband, and friends, this is Takal's first bigger-budget project. She also has the distinction of being announced as the first female director hired by Blumhouse, the production company behind the series, right after company founder and CEO Jason Blum was criticized for saying in a interview with Polygon that few female directors are inclined to make horror films. He apologized, and Takal makes it clear that the company made her first industry film a positive experience.

"I always felt like they were trying to help me make the best version of the movie I was trying to make, as opposed to pushing me in a direction of making something that they wanted to make."

In the film, Alexis (Suki Waterhouse) has given up dreams of an acting career, settling for babysitting to make ends meet. She feels a growing sense of jealousy and unease witnessing the wide-eyed devotion her ward has for former friend Danielle's not-YouTube channel. Danielle (Carly Chaikin) promotes wellness juices (with a hefty helping of gin) and tells followers they can achieve whatever they want by focusing on themselves. Alexis decides to face her past by getting the gang back together at her childhood home, where it's hinted some ugly events went down during their school years. The friends aren't even sure Danielle will come, but she does, staying perfectly on-brand as the evening begins to unravel.

Having recently moved to L.A. from the East Coast herself, Takal says that the surrounding lifestyle offered plenty of inspiration at first. "There’s a huge part of the culture where it’s like, 'Drink Moon Juice! And eat like, rabbit food, and then your life will be perfect!' And I think it’s very easy to buy into that," she says. Not that she's completely against the breezy, holistic lifestyle. "It’s fun!" she says. "My friends and I always exchange crystals on our birthdays. But taken to the extreme, which I feel like it can be, I think it breeds a really narcissistic type of person whose focus is on self-love."

After their celebration falls apart, Danielle attempts to win over her former friend Chloe (Melissa Bergland), who she mocked for being fat in school, by promising her a taste of Danielle's own fame and fortune. The mantra she tells Chloe to repeat as they chase down the rest of their crew — "nothing will stand between me and my desires" — is the epitome of utter egomania rebranded as self-empowerment. "Activists talk about making sure to take care of yourself because they’re spending so much of their day working and trying to help, outwardly focused," Takal says. "But if you’re just somebody living in L.A. doing this stuff for the sake of doing it so you can look good on Instagram, I think that’s kind of awful."

Instagram's a particular source of ire for Takal, with its heavy emphasis on visuals and "sharing" your life via its Story feature (with other people mere fodder for yours, as Danielle demonstrates), the app's perfectly primed to tap into our worst negative comparisons and envy. "I think the problem with it is the way that people are able to curate their lives, so that being a fully three-dimensional person you see just the bits that people want you to see, then other people look at that and start to feel inadequate," she says. The self-flattening is almost necessary if you want to be noticed; to have any kind of sway on social media you have to become your own brand. It's a vicious cycle on both sides, with competition and perfection vs. feeling small and boring.

Takal's personal solution was to just not look at all. "I deleted instagram from my phone, it’s not that hard," she says. "I think people could do it, I just think it’s a compulsion. People are maybe addicted to feeling bad, or competitive, or high-status."

And her goal with New Year, New You was to get women to examine their relationships to social media, not eliminate them. "Are they doing it to take care of themselves, or are they participating in something that’s actively making them feel worse? What does it mean to love yourself truly? Is it that your skin looks a certain way or that you’re buying the things Goop tells you to buy, or that you have a grounded idea of who you’re supposed to be that’s rooted in something internal?"

Working in the horror genre helped the director get the message across without it coming off as too didactic. "In this movie things are funny in parts and things are scary in parts, so you can absorb my point of view and things I want to explore without feeling like I’m being a stick in the mud telling you, 'It’s bad to be on social media,'" she says.

For Takal, filmmaking is a way of working through those insecurities herself. "It’s acknowledging a negative side of myself or of people in my social circle, other women that I know. Just being up front about it and confronting it kind of takes the teeth out of the stigma or shame."

It might always be an uphill battle — "I don’t know if people can ever truly not feel competitive because competition’s baked into capitalism," she says — but she sees hope for a better future. "It used to be if my friend got a job I didn’t get I’d be like, 'Why them?' And now I’d rather it go to my friend than someone I don’t know. I’d rather help them get those jobs."

Takal hopes by outlining the issue and showing how widespread it is, women can start to see each other as allies, not enemies, like the friends who turn on each other in New Year, New You. "I think that women can have very healthy relationships!" Takal says. "The more strides women make in parts of their lives like work, the less of a scarcity mentality there’ll be."