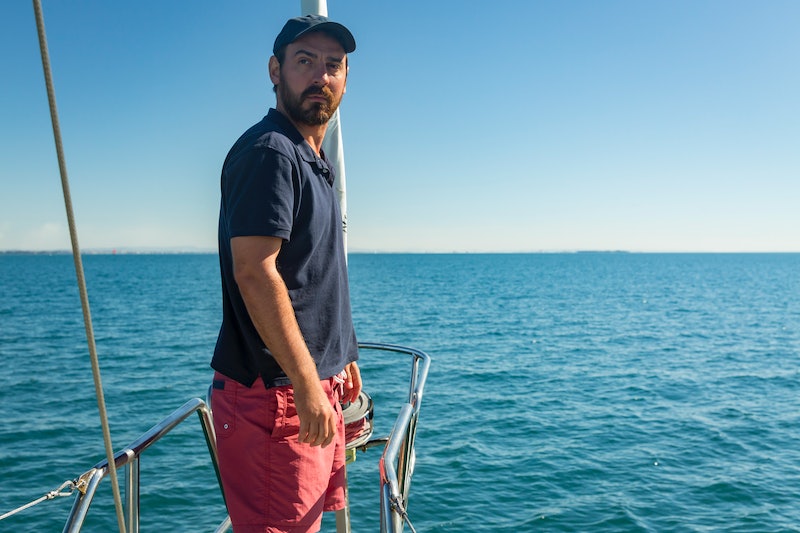 Spoilers ahead for Safe Harbour Episode 1. "Do you know what I'm going to do when we get to Australia?" Ismail Al-Bayati (Hazem Shammas) says while cradling his sick daughter in the premiere episode of the Australian miniseries. "I'm going straight to the closest shop, and I'm going to get everything I need to make you bourek. With pickles." When she asks if they have all of the ingredients, he says, "In Australia, they have everything." Safe Harbour premiered on Hulu on Friday, Aug. 24 and follows both a refugee family and the Australians who find them stranded in the ocean. The show asks viewers what they would do in this tricky situation. And though it's ultimately a commentary on Australia's immigration policies, it's absolutely universal.

Episode 1 centers around Ismail, his wife, Zahra (Nicole Chamoun); son, Asad (Yazeed Daher); and daughter, Yasmeen (Maha Riad). They're attempting to migrate to Australia when their boat, filled with fellow asylum seekers, breaks down. They're able to intercept five white Australians who are sailing to Indonesia on a yacht. While the episode keeps flashing forward five years, viewers eventually discover that the five Aussies anonymously vote 4-1 to tow the Iraqi refugees to safety.

It's unclear who the dissenter is until the end of the episode, when Ryan's wife, Bree (Leeanna Walsman), cops up. "I was the one who voted no," she says. "And if I was put in the same position today, I think I would do the same thing. Because I was thinking about our family. Our children. If helping those people meant putting ourselves at risk, then I just kept thinking of Maddie and Lachlan alone without us."

Bree can't keep the disdain out of her voice when she says "those people," and her racist tone is all too familiar. It's clear that Ismail's boat represents those seeking asylum from struggling nations all over the world. And while his family successfully make it to Australia, many don't. Then-Australian Prime Minister Kevin Rudd announced in 2013 that asylum seekers arriving in Australia by boat would be rejected, per The Guardian. They would instead be sent to an off-shore processing facility in Papua New Guinea. Christine Milne, the Greens leader at the time, called it a "day of shame for Australia," per the Guardian.

What's more, according to a 2017 piece by The Guardian, 771 asylum seekers on 31 boats have been turned away from Australia since 2013. However, while it's easy to point fingers elsewhere, America's immigration policies are also hotly debated. And since President Trump is adamant about deporting all illegal immigrants, Safe Harbour's storyline will, unfortunately, resonate with American viewers.

As for Safe Harbour, while the Australians initially decide to tow the refugees to shore, they wake up and discover that someone has cut the rope between their two boats in the middle of the night. It's unclear who the perpetrator was, and each boat thinks it's the other. This rope can be viewed as a lifeline that connects the outsiders to the Australians — and when it's cut, it's difficult to make reparations.

But try they do. Fast forward five years, and Ismail lives in Brisbane with his family. He's a cab driver, Zahra is studying nursing, and Asad is a teenager. One day, he not-so-serendipitously picks up Ryan Gallagher (Ewen Leslie), the Australian captain of the yacht. When Ryan recognizes him, he invites Ismail's family over for an awkward dinner party, along with three other members on the boat.

However, it's clear that Zahra hasn't forgiven the Australians for what happened. She begins to cry at the table and finally says, "How can you sit here laughing? You said you would take us to Australia, and in the middle of the night, you cut us loose!" Their faces sober up as they realize the ramifications of that incident five years ago.

As they're leaving, Zahra turns around and yells, "Seven people died! Seven! You killed my daughter!" Indeed, Ismail's little girl passed away on the boat, which reveals how dangerous their journey really was. And since the Australians thought the asylum seekers cut the rope themselves, they didn't go back to check on them. It's no wonder Ismail's wife hasn't forgiven the carefree sailors — she thinks they did it on purpose. And perhaps one of them did.

With such a sobering plot unfurling in just Episode 1, it's unclear whether Australia is a safe harbour for Ismail and his family, after all.