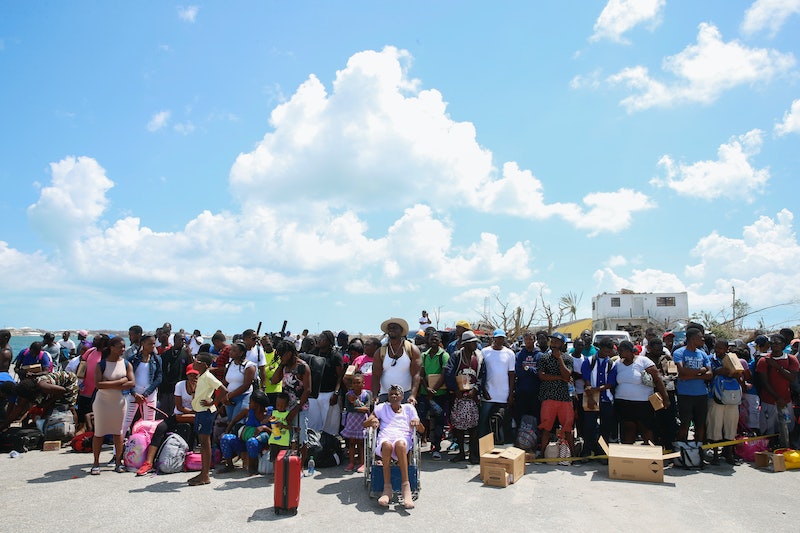 In this op-ed, writer Kelly Hayes explores what the United States' decision to turn away Hurricane Dorian survivors could mean for our future.

On Monday, President Donald Trump responded to growing public outrage over the news that more than 100 Bahamian refugees fleeing the ravages of Hurricane Dorian were ordered off a ferry headed for Fort Lauderdale, Florida, on Sunday. While Customs and Border Protection (CBP) has sought to place the blame on the ship’s operator, Trump’s explanation for the incident was that he “doesn’t want to let people who weren’t supposed to be in the Bahamas come into the U.S.,” and that there were "some very bad people and some very bad gang members and some very, very bad drug dealers."

Under current U.S. rules, Bahamians should be able to enter the United States with only a passport and proof that they have no criminal record.

Numerous critics of the decision to turn these climate refugees away have invoked the memory of the United States’ refusal to allow a ship with more than 900 Jewish refugees to port in 1939. The United States turned them away, citing concerns that some of the refugees might be spies. A quarter of the ship’s refugee passengers ultimately perished in the Holocaust. But it is sadly not enough to view the administration’s actions as a one-off recurrence of an 80-year-old tragedy.

While Trump has been accelerating disastrous outcomes for refugees in an immediate sense, the United States has been on this trajectory for years. Under President Bill Clinton, for example, a decision was made to institute security measures along the border that would drive migrants who were attempting to cross illegally into the desert. While the measure was characterized as a deterrent, at least 8,000 migrants have died along the border since 2000, according to the Tucson Sentinel.

A recently leaked draft of a major United Nations report warned that hundreds of millions of people will be displaced by climate catastrophes in the coming years and that the water supplies of billions of people will be compromised by our changing climate. As these events unfold, the moral reckoning we are faced with will only become graver. Will we uphold policies that have left people to die and policies that would, in a time of collapse, leave hundreds of millions of people to fend for themselves as economies crumble in a dying world? Will we resort to an increasingly militarized response as refugee "caravans" continue to multiply in size? Will we fire bullets rather than tear gas across the border to fend off desperate people in order to maintain our own resources? If our country refuses to alter its path, these outcomes seem all too likely.

As millions of Americans eventually join the ranks of climate refugees, will we too find ourselves locked out of realms where shelter and other means of survival still exist?

And if we do not radically reimagine our relationships with foreign refugees seeking assistance, we may be sealing our own fates as well. The United States already has its own climate refugees. The Biloxi-Chitimacha-Choctaw Tribe, for example, has lost 98% of its land in Louisiana to rising waters. While tribal leaders had previously hoped that a $98 million federal grant might help them relocate, Albert Naquin, Chief of the Isle de Jean Charles Biloxi-Chitimacha-Choctaw Tribe, stated earlier this year that “the state [had] hijacked the money” bringing the tribe “back at square one.”

In 2018, following the worst wildfires in California history, Butte County officials announced that they could only place 800 to 1,000 of the area’s displaced residents in long-term housing. With well over 10,000 evacuees seeking assistance, temporary shelters were overwhelmed. Outbreaks of serious illnesses spread like the wildfires that preceded them. Many of these climate refugees were left living in tents in makeshift camps. Like the migrants arriving at our southern border, these Americans were forced to fill out forms and hope for the best as they endured the elements.

And in the year following Hurricane Maria, 130,000 people left Puerto Rico causing the largest drop in population the island has ever seen in a single year.

In the words of award-winning climate reporter Dahr Jamail, “all of us now, if we live long enough, are likely to become climate refugees at some point ... whether it be from lack of food and water, rising seas, wildfires, smoke, or extreme weather events. For many, their time as climate refugees has already begun.”

As millions of Americans eventually join the ranks of climate refugees, will we too find ourselves locked out of realms where shelter and other means of survival still exist? We are making that decision now, whether we realize it or not, because our government’s practice of leaving refugees to die has created a vicious cycle that will ultimately consume us all — unless we choose to break it.