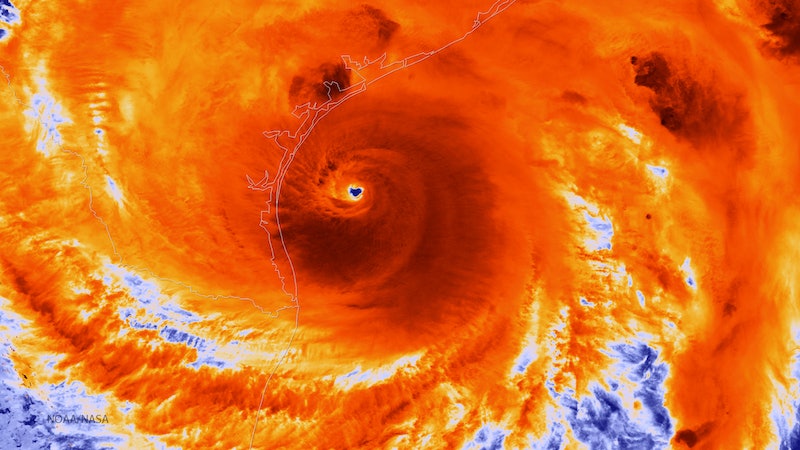 ABC News reported Friday evening that Hurricane Harvey is now a Category 4 storm. When the hurricane neared Texas on Friday morning, it had been classified as a Category 3 storm, but it intensified over the course of the day and is now expected to be the worst hurricane to hit Texas in nearly 20 years, according to ABC.

Even before Harvey strengthened into a Category 4 storm, the National Hurricane Service had warned that it could bring "catastrophic and life-threatening flooding" to coastal communities in the state. Thanks to the storm surge that's accompanying the hurricane, water levels in some areas will rise by as much as 12 feet, which will produce "large and destructive waves," according to the National Hurricane Center. Now that Harvey is a Category 4 hurricane, it's expected to produce maximum wind speeds of up to 130 miles per hour; the previous night, its maximum sustained winds were expected to reach only 85 miles per hour.

As a result, the National Weather Service has issued a flash flood warning for Aransas County, Eastern San Patricio County and Southeastern Refugio County, as well as a tornado warning for Brazoria, Fort Bend, Matagorda and Wharton counties.

By Friday evening, the eye of the storm was still several miles from Texas shores, but its storm surge had already started flooding the shores, according to CNN. Storm surge occurs when a hurricane "pushes" water towards the coast as it approaches from the sea, causing water levels to rise and, eventually, flooding.

Many communities and cities are under mandatory evacuation orders, including all or parts of Aransas Pass, Brazoria County, Calhoun County, Freeport and Matagorda County. Voluntary evacuation orders have been issued in Galveston County, Chambers County and the cities of Dickinson, La Porte and Seabrook. The 36,000 residents of Matagorda County were told on Thursday to leave by 10:00 am; by Friday afternoon, roadblocks had been erected on Highway 2031, ABC 13 reported, thus preventing anybody still in the county from leaving.

One reason Hurricane Harvey is expected to be so disastrous is that after its eye reaches land, it will continue to hover above Texas for as many as five days. During that time, it will continue to rain down on the state, and that rain will compound any existing floods caused by the storm surge. The National Weather Service warned Friday that as a result of Harvey's cumulative damage, parts of Texas may be rendered "uninhabitable for weeks or months."