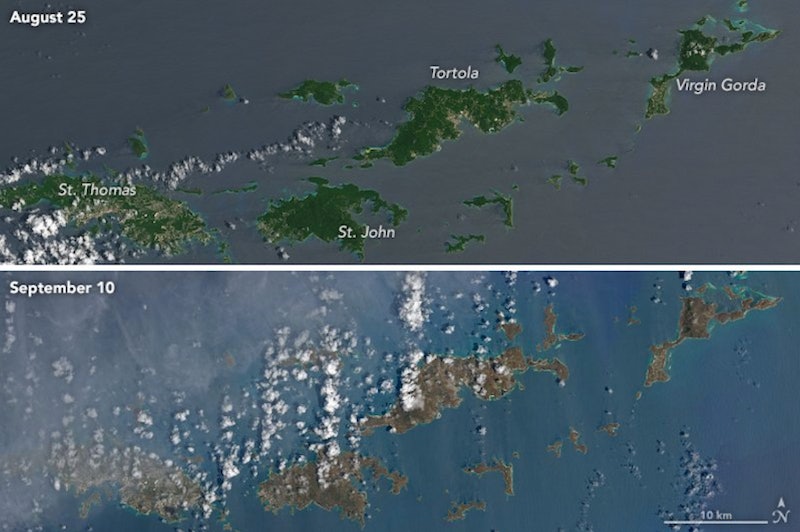 Hurricane season this year has been particularly intense, to say the least. From Harvey hitting southeastern Texas and Irma razing through South Florida and the Caribbean, to Hurricanes Jose and Katia forming shortly on Irma's heels, this Atlantic hurricane season packed one stunning hit after a devastating other. While weather experts are still assessing the degree and amount of damage Hurricane Irma caused South Florida and the islands in the Caribbean, a satellite image from NASA's Earth Observatory showed how Irma devastated the Caribbean so much, it changed its colors.

The set of images captured by the Landsat 8 showed the Caribbean islands before Irma hit and then after it stormed through the region. NASA science reporter Kathryn Hansen explained the unmistakable change in color evident in the satellite images and said that the browning visible in the second image could have been due to the ferocity of Irma's winds.

The hurricane's rapid intensification in a single day led to it packing winds at 185 mph. Hansen noted that it was possible that the winds uprooted local vegetation from the soil, causing the land to appear browner than green. In addition to that, dried out land visible in the second image could have also been due to excessive salt brought on land by the hurricane winds.

"The most obvious change is the widespread browning of the landscape," Hansen wrote. "There are a number of possible reasons for this. Lush green tropical vegetation can be ripped away by a storm’s strong winds, leaving the satellite with a view of more bare ground. Also, salt spray whipped up by the hurricane can coat and desiccate leaves while they are still on the trees."

The recent NASA photo set is yet another addition to the breathtaking satellite images of Hurricane Irma, which registered on seismometers initially due to its shocking intensity. Take a look at the photos yourself and you'll see the undeniable change in the geographic colors of the islands.

In the first photo of the pre-storm islands, you can see verdant imagery of local vegetation in St. Thomas, Virgin Gorda, St. John, and Tortola. But in the post-storm image is much more different and remarkably grim. The greenery is significantly absent, replaced with murky brown lands and salt white patches around the islands.

Irma's impact on these islands shouldn't be surprising given the fact that the hurricane became the most powerful Atlantic hurricane recorded in history with winds at 185 mph for over 35 hours. For this reason, the Category 5 storm's winds were described as "the longest any cyclone around the globe has maintained that intensity on record" by Colorado State University researcher Philip Klotzbach.

According to different reports, Anguilla, Cuba, Barbuda, and the Virgin Islands were some of the most affected places hit by Irma. In the case of Barbuda, the small island stood little to no chance in front of the powerful Irma which reportedly destroyed 90 percent of the tiny island's commercial buildings, vehicles, and residential areas. The prime minister of Barbuda described the hurricane as a "bomb" that left more than half of the island's population homeless.

There's still some good news. While some islands like Barbuda utterly succumbed to Irma, others seemed to have survived or even averted the monstrous storm. Barbuda's sister island, Antigua, reportedly did not undergo significant damage like the former island as it appeared that the eye of Irma passed its northern region only. The storm seems to have calmed down after 12 days and appears slower compared to its initial terrifying and seemingly unstoppable state. Hopefully all affected regions make a quick, sturdy, and long lasting recovery.

More like this
Why Experts Say Sleeping With A Fan On Isn’t Totally Risk-Free
By Sophie McEvoy
The 6 Best UV Umbrellas, According To A Dermatologist
By Rachael Green
The 8 Best Indoor Door Mats For Your Home
By Jenny White
At 14, D'Arcy Carden Was Sneaking Out To Parties & Crying Over Kurt Cobain
By Ivana Rihter
Get Even More From Bustle — Sign Up For The Newsletter