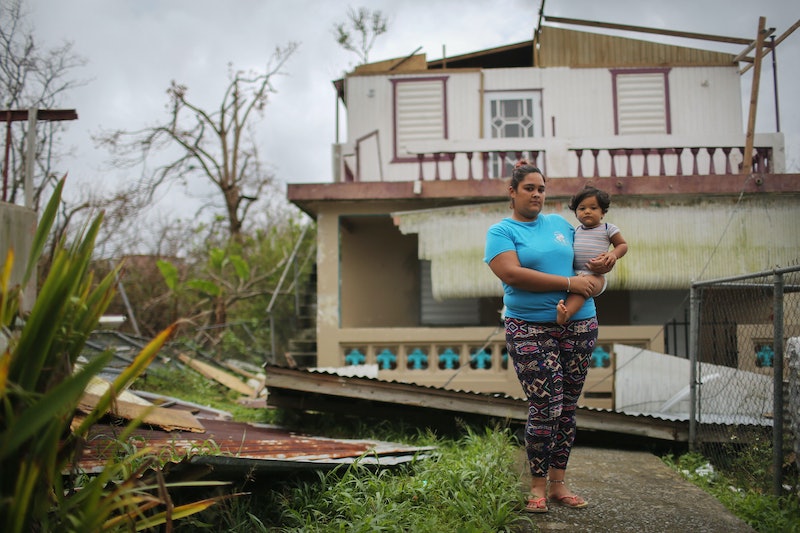 It's been two months since Hurricane Maria hit Puerto Rico on Sept. 20, and officials still don't know how many people have died as a result of the storm. The official death toll is currently 55, but a report released by CNN on Monday reveals that Puerto Rico's funeral homes believe the death toll is much higher. If their accounts are true, the storm would rank among the deadliest to ever hit the United States.

CNN spoke to 112 Puerto Rican funeral homes — around half on the island, according to the local chapter of a national professional organization — and received reports of 499 people who had reportedly died because of the hurricane. That's about nine times the number that the government is currently reporting.

If the figures indicated by funeral homes are correct, Hurricane Maria would have earned a place among the 10 deadliest storms in U.S. history. The list is currently topped by the Great Galveston Hurricane of 1900, which killed about 8,000 people, and also includes several storms with around 400 victims.

Counting deaths from natural disasters is challenging. The difficulty lies not just in locating bodies, but also in assessing causes of death. It's typically simpler to identify "direct" deaths — victims who perished during the disaster — whereas "indirect" deaths, which generally happen in the aftermath of the event, are harder.

CNN investigated some "indirect" deaths that were reportedly caused by Hurricane Maria. 89-year-old Quintín Vidal Rolón, for example, died in a fire started by the lantern he used after the storm knocked out his electricity. Juan B. Robles Díaz committed suicide after the hurricane left him with a destroyed home and recurring night terrors about another disaster striking. José A. Molina suffered from a heart attack caused by stress in the storm's aftermath. Pilar Guzmán Ríos died when a power outage prevented her from taking insulin for her diabetes or using her electric-powered breathing machine.

Part of the problem is that there isn't a national standard for recording natural disaster victims. Indirect deaths are generally taken into consideration for official tallies, but there's no legally prescribed way of defining those deaths.

Sometimes hurricane deaths are mistakenly blamed on the victims' preexisting health conditions or other natural causes. For a hurricane to be officially declared responsible, San Juan's Bureau of Forensic Sciences must first review the person's death. In CNN's survey of 112 funeral homes, only 601 out of the 1,968 deaths reported since the hurricane had been analyzed by the government's forensics lab.

Some people have accused the Puerto Rican government of deliberately minimizing the death toll. However, because it can be so difficult to identify indirect deaths, inaccuracies in official counts are likely even if the government is not purposefully distorting them.

There's no reason for us to be hiding numbers. We work with what we've received and we've analyzed it. And my personnel work hard to do this ... It hurts us to hear people think we might be playing around with the numbers.

Accurate death counts are important for more than just historical memory. Families of official hurricane victims can sometimes be eligible for aid from the government, and statistics can help mobilize activists and encourage people to donate to disaster relief efforts.

As Eric Klinenberg, director of the Institute for Public Knowledge at New York University, told CNN:

When the public hears that relatively few people died then they get the message: "Everyone relax and the local government can handle this."

The fallout from Hurricane Maria is nowhere near over. Less than half of Puerto Rico currently has electricity, and it's likely that the official and unofficial death tolls will only continue to rise. If you'd like to help Hurricane Maria victims, learn how to do so here.