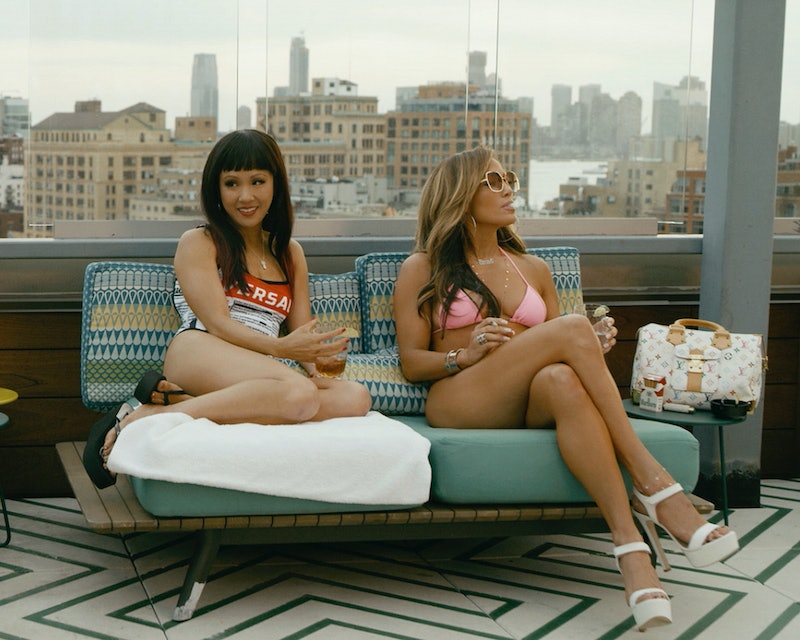 "The Juicy Couture tracksuit. The low-rise jeans with the thong sticking out of the back. Ugg boots. Platform heels. Large oversize jewelry — earrings especially, but jewelry in general. Cocktail rings. Body chains. Body jewelry. Self-tanner. Tiny little eyebrows," Mitchell Travers, the costume designer for Hustlers, says when we speak on the phone in early September, listing off the '00s trends that he made sure to include in the film, which is out this Friday. "Logos. That was really one of the first times logo mania became really exciting for people. Graphic tees. Von Dutch hats."

This list will probably make anyone who was a teen or adult between 2007 and 2011, when the primary action in the film takes place, wince. And, along with their looks being true to what these four women characters with suddenly unlimited budgets would have picked out at that time — the visceral response is part of what Travers wanted.

Hustlers is a period piece. (It's also scammer movie, a stripper movie, a crime movie, a drama, a comedy, and based on a true story.) After the 2008 financial crisis, four former strippers in New York City embark on a get-rich-quick scheme that involves drugging wealthy men, running up their credit cards at clubs, and taking a commission. Because of the years it spans, the ensemble cast, the varied locations, and the many extras, Travers says Hustlers required thousands of costumes. And because the main characters — played by Jennifer Lopez, Constance Wu, Keke Palmer, and Lili Reinhart — love spending money as much as they love making it, they had to be decked out in the hottest styles in the second half of the film.

"I weirdly ended up finding something gorgeous in this trashy glamour of the time," says Travers, who was also the costumer designer for Late Night and Eighth Grade. The movie doesn't take place that long ago, but because so much has changed in fashion, Travers found an interesting result: "Most of the audience who's watching this movie was wearing exactly what these girls were wearing at the time, so it's got this lovely effect that you can watch it and cringe, but also find a little bit of yourself in it and realize that you, too, got caught up in something you regret."

It's also impossible to see Lopez as the ringleader, Ramona Vega, and not think about the fact that the star has worn a lot of this stuff herself: velour tracksuits, giant sunglasses, bodycon dresses. "She and I would joke that some of these things she was responsible for," Travers says. He had her wear a Juicy Couture sweatsuit in the film as a nod to her past image. "I just thought it would be so much fun. Like, we all remember Jen wearing that, and I think there was a certain delight in seeing her do it again," he says.

Travers took inspiration for Ramona's luxe look from Kimora Lee Simmons and Baby Phat, Victoria Beckham around the time she was starting her line, Rachel Zoe, and the Victoria's Secret Angels. "They were at the height of their popularity at this time," he says of the models. "And some of them shared a similar journey [to the women in the film] where they came from more humble beginnings and suddenly had more fame and fortune."

Wu's character, Destiny, is a little bit edgier and wears a lot of low-rise pants, mini skirts, and belted everything. "I looked more at early Lindsay Lohan, Nicole Richie, Tila Tequila, and Snooki," Travers says. A very aughts group, indeed. The costume designer's favorite look in the movie is one of Destiny's.

"She wears a pale pink tube top — which is outrageous that that's ever been a trend — and it has "Suck it up, buttercup" embroidered across the front. And then she wears this tiny little denim mini skirt with a horrible graphic print on it of wallet chains. And we paired that with a thong that came up out of the back, and a pair of Bebe rhinestone four-inch wedge platform flip flops," he says. There's a lot going on there, but Travers says this outfit only gets a few seconds of screentime. (You can see how they ended up needing the volume of looks that they did.)

A lot of Travers' inspirations for ensembles like these were paparazzi magnets at a time when celebs were being snapped more than ever before. Having these photos to reference helped the designer, but the pictures were also bizarre relics to revisit. "It was very possible to get these high quality images of people at all different stages in their lives, from their pajamas to clubbing," Travers explains. "And so it was really amazing and frightening to be able to study human beings from, you know, breakfast to the club on any given day."

"It was scripted that she was working on this line of swimwear that was all made out of denim," he says. "I just looked at a lot of stretch denims, and one of the heaviest trends at that time was over embellishment. So everything was topstitched. And I had this faux stingray plastic that we ended up making all of the straps out of. And the grommets were all different colors. And it had rhinestone beads at the end of it. It was just kind of a more is more feeling to the whole line."

Overall, Travers loved giving the era in Hustlers the treatment and consideration past decades have gotten in film many times over.

"The '80s have been glamorized and the '70s have been glamorized. The early 2000s haven't really had that moment. I feel like our film is one of the first to identify it as such and give it a visual language," he says. "When we want Ramona to feel a little uncomfortable, we can do that with the clothing of this period just by the fact that a lot of it was uncomfortable, a little constricting, slightly suffocating. It was fun to be able to use all of those trends as tools for storytelling."