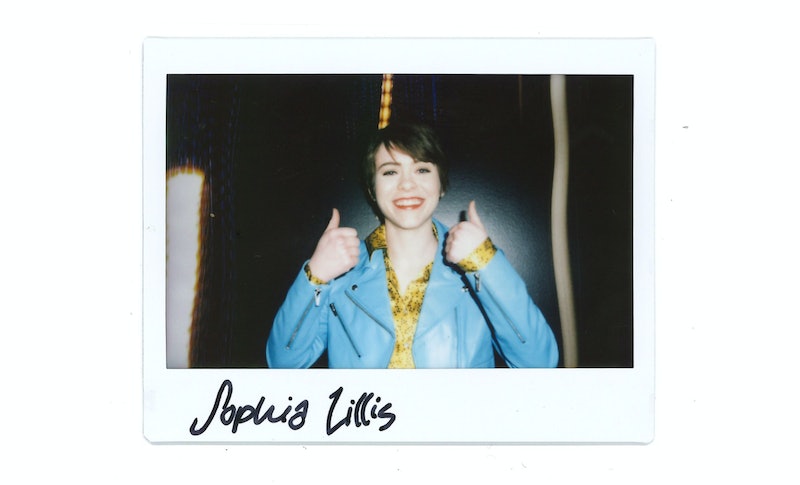 When celebrities hang out with Bustle writers, we want to give them the chance to leave their mark. Literally. So we hand them a pen, a piece of paper, a few questions, and ask them to get creative. This time, I Am Not Okay With This star Sophia Lillis is leaving her mark in the Bustle Booth.

Sophia Lillis should be taking a midterm right now, but she didn’t have time to study. Early this morning the high school senior flew back to New York City from Sundance, where her film Uncle Frank, which also stars Paul Bettany, got picked up by Amazon. She’s promoting Gretel & Hansel, a moody retelling of the classic Brothers Grimm tale, and a new Netflix series, I Am Not Okay With This, based on Charles Forsman’s graphic novel. It’s not that school isn’t important to Lillis. It’s just that so much else is important to her, too.

“I've kind of gotten used to the whole trying to talk to the teachers and figure out a way to do [schoolwork and acting],” the 18-year-old It actor says as her mom looks on from across the room. “I'm just looking [to end] the school year with passing grades [so I can] continue with acting.”

Lillis talks about acting with a certainty that belies her age. By 7, she’d already started ruling out other visions of the future. “First of all, I couldn’t do any sports,” she says. “I couldn't remember any of the rules.” Her twin brother had quickly emerged as The Smart One. “I even saw that and thought, Wow, I’ve got nothing.”

Lillis cast her net wide, trying dance classes and singing. While she liked the arts, she insists she wasn’t improving as fast as the other kids. Around that same time, her stepfather recruited her to perform in a short movie he was making for film a class. “I dragged a red wagon around New York,” she remembers. “That was it. That was the whole thing.” Fast forward 11 years and that seemingly random afternoon spent roaming Times Square in a Halloween costume feels like a turning point. “That was the first time I really had a lot of fun doing something, and other people noticed, and I started taking acting classes.”

Watching her twin fill out his college applications this year has only reaffirmed Lillis’ choice. Far from growing tired or burnt out by a decade of performing, she’s more eager to do good work. “Whenever I look for a script it's like, is it a good story? Is it a good character?" she says.

"You don't usually see that, actually. Sometimes you get some roles where the girl is just mean, and without a reason to be mean. That old angsty teenager thing without a reason to be angsty, and I always feel like that isn't totally accurate, being a high schooler myself. I'm not that angsty, am I?” Suddenly a teenager again, Lillis looks to her mom for confirmation. She shakes her head. “Nice,” Lillis says. “That’s good.”

More like this
In 'The White Lotus,' Leo Woodall Gets His Moment
By Gabrielle Bondi
Jodie Turner-Smith & Joshua Jackson's Relationship Timeline Includes Her Proposing
By Jake Viswanath
'Bridgerton' & 'Succession' Casts Join Forces For A New Dickens Adaptation
By Darshita Goyal
Lindsay Lohan Just Recalled A Hilarious 'Parent Trap' Story
By Sam Ramsden
Get Even More From Bustle — Sign Up For The Newsletter