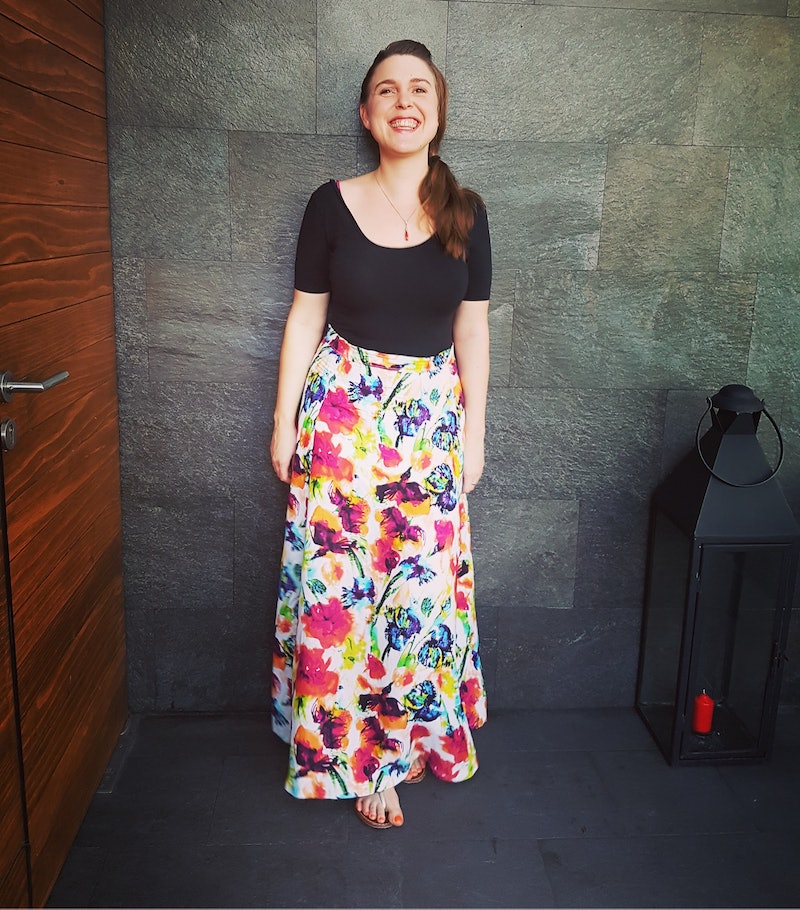 I’ve always followed the beaten path. Excellent grades, great university, a career in New York City. Until one night in 2011, I veered so far off the path that my life changed completely. I was on the back porch of my grandparent’s newly emptied home, drinking champagne and smoking a cigarette with my dad. We'd spent the week moving them into assisted living and I’d been doing a lot of thinking. About choices. About what happens over the course of a lifetime. About life paths and how it’s so easy to keep going and going and going until it’s just… Over.

I sobbed as I smoked. The path I’d been following — the one I’d chosen years before, the one I was so sure about — wasn’t working. I’d finished school in May 2008 and the world looked one way, only to look completely different when the economy collapsed in September. (Quick recap: The housing bubble burst and everything went to sh*t.) So there I was, working an entry-level position at a job where I was the youngest and least experienced — and actively hated by my boss. I was making very little money — $29k before taxes, which is hardly enough to live comfortably in New York — and sending out hundreds of applications monthly, with no response. Literally none. Zero. The Great Recession meant that people with advanced degrees were applying for the same positions that I, with my measly two years of experience and a bachelor’s, was also applying for.

And so I smoked. And I drank too much. And I sobbed every time I saw my dad because I just didn’t know what I was supposed to do. I knew that my life wasn’t working — the three to five beers I drank every day after work were a testament to that — but I couldn’t see any other path to take. I’d done everything right and yet there I was, stuck in a dead end job, dating a guy for six months who still wouldn’t let me call him my boyfriend, and living with a roommate who’d decided he’d rather live with his girlfriend — and that I had to go.

Everything was falling apart around me and in a champagne- and tear-soaked moment, I blurted out, “Maybe I’ll take a vacation to Buenos Aires.” Before my dad could even respond, I flippantly amended my statement. “Actually, maybe I’ll move to Buenos Aires.”

That heavy, heavy weight of being trapped — by my job, by New York, by the disaster that was the U.S. economy — was lifted by the simple act of saying “F*ck everything.”

In addition to being a straight path walker, I’ve also always been a homebody, so moving across the world to a country whose location I wasn’t even entirely sure of was decidedly not in character. I’m also very close with my dad, so when he said, “I think you should do it. I think it’s the change you need,” I was shocked, to say the least. “Really?” I asked. “Yup,” he said. “Do it.”

And so I did. I bought a one-way ticket to Buenos Aires, Argentina, and started wrapping up my life in New York. I gave notice at my job, told my not-boyfriend that I was leaving, and immediately started to feel better. That heavy, heavy weight of being trapped — by my job, by New York, by the disaster that was the U.S. economy — was lifted by the simple act of saying “F*ck everything.”

In June, I moved back into my parents house and took a construction job to bolster my virtually non-existent savings. By the end of the summer, I had a coffer of about $4,000 and a backpack that almost tipped me over when it was full. I booked four nights in a hostel in San Telmo, Buenos Aires, and got on that plane thinking that, worst case scenario, I’d run out of money and have to slink back to my parent’s house with my tail between my legs. I had no friends there. I spoke almost no Spanish. I had no idea what I was going to do to make more money when my savings ran out.

It was the start of the greatest adventure of my life.

It’s been almost exactly seven years since I boarded that first plane and — spoiler alert — I didn’t run out of money. (In fact, once I established myself as a writer, I actually managed to save money for the first time in my life.) I did, however, become fluent in Spanish, get a tattoo, spend six months sleeping all day and partying all night, meet some of the most incredible humans of my life, move to an eco village in Chile, fall deep into love, and then decide to follow that love around the world.

With my partner, I’ve traveled to and lived in 16 countries, from the bottom of South America to the far eastern islands of Japan. I’ve ridden a scooter through Balinese rice fields; showered with an elephant in Thailand; scooted across an ancient Mayan lake in Guatemala; gone three days straight without sleeping as I stumbled in and out of Argentine night clubs. I chased a scorpion out of my kitchen on Christmas day in Chile; ate street-side pho in Saigon; saw the stupas of Yangon. I quit smoking. I started working out. I honed my craft. It’s been… Singularly incredible.

I was 24 when I left the U.S. the first time, broken, confused, and with no idea where my path was taking me. All I knew was that I couldn’t keep doing what I was doing — if nothing else, my liver wouldn’t take it. And if you’d told me back then that I’d hit 30 with no furniture, no plants or pets, and a career writing, I would have laughed in your face. But despite the fact that I’m not where I ever planned to be, I’m so happy about where I am.

That other path — the one I’d planned for and worked toward and was so sure about — wasn’t mine. On that cold night on my grandparent’s porch I made the decision to take control of my life in a way that they — and my grandmother in particular — were never given the freedom to do. I am forever grateful.